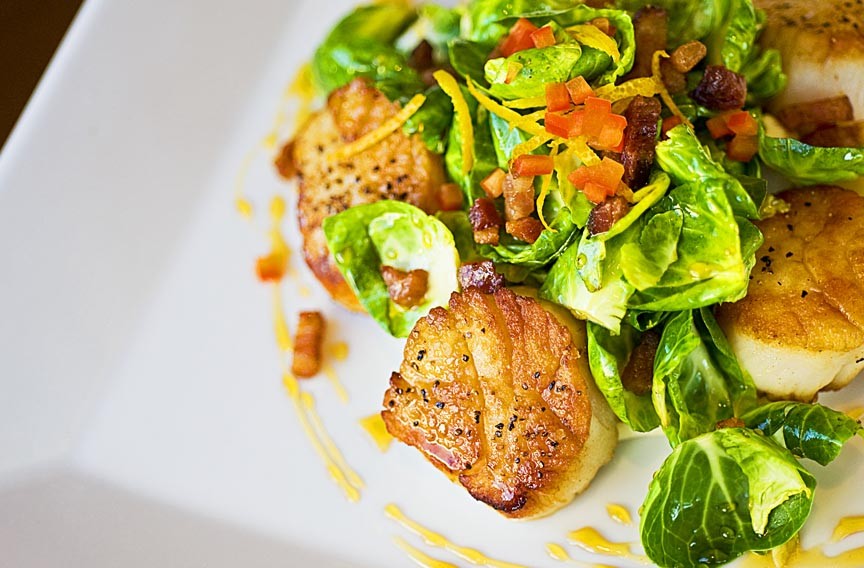 It’s as if the Daily Kitchen & Bar polled the dining public and added every want to its Carytown spot. There’s an expansive corner patio covered with lime-green umbrellas. Dark wood, modern lines and floor-to-ceiling, garage-style windows. An open kitchen and clean, meticulous décor. A lively bar with affordable happy hour food and drinks. And such wide-ranging offerings as organic, fresh, vegan, vegetarian, gluten-free.

It’s the Richmond Restaurant Group’s latest addition to its ever-evolving portfolio. By now the owners are past “if you build it, they will come.” They know the challenge is getting people to come back.

The Daily is bewitchingly busy. But with busy comes loud. On a recent Thursday, seated in the beautiful bar and given ample time to read the menus, flagging down a bartender is tough. When we’re finally able to order, our inexperienced bartender does his best to be helpful but manages to supply much misinformation. A little confused on what kombucha is, he still suggests the watermelon kombucha martini ($8) with gusto. In trying to describe appetizers, he makes equally emphatic recommendations. We decide on mussels, spinach and artichoke dip and edamame — all bargains at half-off during happy hour.

The mussels ($10.95) would be fantastic except for the faulty temperature of the lardon-laden, tomato-Parmesan broth. Just a bit chilly and less of a broth than a heavy sauce, it detracts instead of adds to the plump bivalves. Our edamame appetizer ($4.95) starts on a positive note with soy glaze and chips of sea salt adding dimension to the snappy soybeans. But into the middle of the large portion, it becomes unappetizing. Poor drainage has the pods sitting in a pool of diluted soy water. Triangles of spongy flatbread encircle a whipped and intensely flavored spinach and artichoke dip ($7.95). A quick grating of Parmesan would be an improvement over the powdery shake that’s used.

On another visit, service is equally enthusiastic albeit a bit forgetful. Gluten-free fried oysters are crisp and a steal ($9.95). Missing the advertised green papaya slaw, the oysters draw some acid from vinegary onion and grated carrot. Seared scallops ($11.95) stop just short of being seared but are large and plump, complemented well by roasted red pepper and a paper-thin slice of charred pineapple. The burger ($9.95) is described as burger-house style with two flat, well-done patties (it only comes cooked this way) with cheddar, lettuce, tomato and onion. It’s decent but the house-cut french fries steal the plate.

Brussels sprouts ($4.95), a cult vegetable in this town, are crisp with a hint of sweetness. Our server says that agave gives the taste, but with further investigation returns to let us know it’s an apple-lemon gastrique. Roasted cauliflower ($4.95) arrives in a similar water bath as the edamame and covered in capers. Lightly dressed in sesame and citrus, steamed kale ($4.95) is exemplary, and even the uninitiated leafy-green eater will rejoice. A white cheddar avocado BLT ($9.95) is a pretty sandwich, with thick slices of in-season avocado atop a generous stack of bacon and snappy white cheddar.

Attention to detail is even although the service stumbles. On all of my visits, a bartender polishes glasses even with the throngs of bar patrons. A chalkboard list of local farms sits in the back of the restaurant quietly detailing the community the owners are attempting to support. Keeping a group of restaurants current and accessible isn’t easy, but with tweaks to service and server knowledge, the Daily Kitchen & Bar could position itself to become a mainstay in Carytown.