D12 at the Canal Club 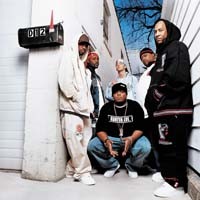 Before Eminem positioned himself as one of the most widely recognized musical artists of his generation, the rapper known as Slim Shady was cutting his teeth among Detroit's underground MCs, scraping to earn some credibility. Embracing a live-together, die-alone point of view toward his artistic ambition, Eminem soon found himself aligned with D12, a unique rap collective created by fellow freestyler Proof. Though Eminem would go on to find great commercial success under the wing of megaproducer Dr. Dre, he remained faithful to his first musical family, eventually establishing his own record label and making D12 his flagship act. While the group endured a shaking setback with the sudden murder of Proof in 2006, the friends have decided to regroup and follow their two chart-topping albums, “Devi's Night” and “D12 World,” with a new record scheduled for early 2010. Fleshing out material on the road, D12 can be seen at the Canal Club on Sept. 10. at 8 p.m. $12-$15. 643-2582. — Mike Hilleary