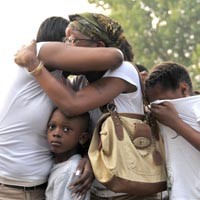 He had the fidgets. During the math portion of the SOL tests June 5 at Martin Luther King Jr. Middle School near Mosby Court, 14-year-old Deshun Taylor couldn't quite sit still.
A good, C-average math student, Taylor was usually a bundle of energy in the classroom. A cutup, but a respectful one, recalls his seventh-grade math teacher, Doris Dungee. She had to move him to another room during the test, but suspects he did fine. The chart hanging on her door -- the students' success marked with metallic stickers: yellow, green, red and purple stars and smiley faces -- shows Taylor had accrued his fair share. Algebraic equations, after all, are no cakewalk for students prone to distraction.
"He would always say, 'Ms. Dungee, I'm going to do better next time,'" she says. "I'm going to bring my grade up to a B. You'll see. You'll see.'" Dungee, who's taught for 35 years, will indeed see when the test results come back in a few weeks. But Taylor won't.
In the early afternoon of June 11, the bubbly, "always smiling" Taylor was lying in the streets of Fairfield Court, bleeding from a gunshot wound. He died later that day at MCV Hospitals.
Linwood "Hollywood" Faulk remembers coming home Wednesday, seeing Taylor lying on the ground. Taylor had stopped by the night before for a fish sandwich. "I told him, 'I'll see you tomorrow,'" says Faulk, who runs a market of sorts out of his apartment in the 2300 block of Selden Street.
Faulk, a veteran who recently spent time in Iraq, says the neighborhood had been quiet -- no serious crime -- for nearly a month and a half. For three days leading up to Taylor's death, though, the city police officer stationed in the neighborhood hadn't been around.
As Richmond continues to garner headlines for its dwindling murder rate and the success of former Police Chief Rodney Monroe (who left last week for Charlotte, N.C.), Taylor's death serves up a dose of reality. Richmond, for all its recent success, still has its concentrated poverty, its violent crime, its long, hot summers in the projects.
"That tore me to pieces seeing a baby lying out there," says Alicia Rasin, founder of Citizens Against Crime and longtime comforter to the families of murder victims. "He was just walking, and then people were shooting." By Friday afternoon, police had arrested three people in connection with Taylor's murder. Police announced the third arrest at a New Orleans style vigil for Taylor Friday night, complete with a brass band from his church featuring four trombone players (Taylor was an aspiring trombonist).
Amid the dingy, concrete boxes that line Fairfield Court, Taylor, nicknamed "North" because his family is from North Carolina, seemed to always be around a basketball. He loved to play -- he was a big fan of the Los Angeles Lakers and Kobe Bryant -- and despite his relatively average build couldn't be convinced professional basketball wasn't in his immediate future.
"You couldn't tell him he wasn't going to the NBA," says Apostle Anthony Taylor (no relation), pastor of the United House of Prayer on Chimborazo Boulevard, where Taylor was a member. Last Thursday, Apostle Taylor, wearing an impeccable pinstripe suit, was clearly shaken by the loss. He was equally disturbed when he turned on the television that morning to see coverage of Taylor's death on the back end of the news lineup.
"This child loses his life," he says, "and it's way on down the line among of list of things. Every child I see right now, I'm looking at him."
He had four sisters and an older brother who lives in Rocky Mount, N.C. The family has lived in the tight-knit Fairfield community for about five years.
Racia Randolph, a member of the church and family friend of the Taylors, says Taylor liked to give his clothes he'd grown out of to her son, Gregory, 11: "I remember, whenever he had something too small for him, he'd say Gregory can have this."
William L. Morris, director of the Boys & Girls Club in Fairfield Court, says Taylor would share whatever he had with others in the gym, where he played basketball. "He bought a pack of Pop-Tarts out of the vending machine" a couple of months ago, Morris recalls, chuckling. "Once he bought the Pop-Tarts, he gave every kid a piece of it until all he had left was a little corner. If he had anything, he would share it."
For his teacher, Dungee, Taylor is the fourth student she's lost to violence. Taylor's mother, Renee Deans, met with the students on Thursday, the day school let out for the summer. Amid the packed boxes and equipment wrapped in plastic, the students spent the day cutting out Deshun's picture in the newspaper, making cards for the family.
"He asked a lot of questions," says Dungee, who has taught at Martin Luther King Middle School for 16 years. "I didn't ever see a frown on his face. He could say the simplest little thing, and everyone would laugh."
It's why she knew he needed some space when he had the fidgets two weeks ago during the SOL test. She could usually sense when he needed it. She saw him again the next day, on Friday, the last time she would see Deshun. He was always courteous, even amid the peer pressure and casual rowdiness of the school's hallways.
"I'd see him in the hallway," she says, "and he would always speak." S