Virginia's Beth Macy is back with a follow-up to her acclaimed book about the opioid crisis. 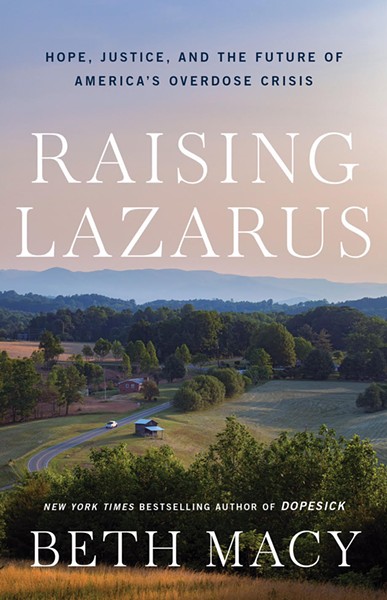 Since her first book in 2014, “Factory Man,” she has scored hit after hit with the biggest so far being “Dopesick,” a narrative about the opioid drug crisis in Southwest Virginia that won a slew of state and national awards and was made in into a Peabody-winning Hulu television series starring actor Michael Keaton.

Her latest effort is “Raising Lazarus: Hope, Justice, and the Future of America’s Overdose Crisis,” which serves as a sequel to “Dopesick” and offers points of what can be done to solve the opioid mess.

Opioid abuse has been prevalent for several decades as doctors, pushed on by Purdue Pharma then owned by the aggressive Sackler family, prescribed millions of opiod pain killers especially in remote areas.

As Macy reports in her new book, “In previous years, Surry County (N.C.) pharmacies sold 55 million opioids between 2006 and 2014 – enough for every man, woman and child to annually consume 83 pills, a rate more than double that of the pharmacies located in surrounding counties.”

Massive addiction and deaths from overdoses followed from opioids or heroin or fentanyl, an artificial opioid that is 50 times stronger than heroin and 100 times strong than morphine.

The opioid scandal has been well covered over the years. The Charleston (W.Va.) Gazette and Mail won a Pulitzer Prize in 2017 for its digging.

What Macy brings to the party is excellent reporting coupled with remarkably clear and well-constructed narratives. Her latest book also serves to suggest what works in fighting the problem. She spends a lot of time talking to people who work the streets as drug counselors reaching out to addicts that have slipped through the system.

One promising but controversial approach is the Syringe Services Program in which health workers provide clean syringes to addicts to use as they work down from addiction by injecting drugs such as Suboxone or Naloxone. Many in politics and law enforcement have fought the idea, although using dirty needles can result in deadly HIV infections.

The solution that more traditional, law-and-order types have had is to simply arrest and lock up addicts, while Macy points out clearly that getting them into rehab is usually far more successful. It sometimes doesn’t work and people can remain addicted or die of overdoses.

Macy, who lives in the Roanoke area and worked for years as a local newspaper reporter at The Roanoke Times, focused more on Virginia in “Dopesick.” Her current book tends to go more into northwest North Carolina, which demographically and economically is similar.

As is her usual approach she spends a lot of time with people at the forefront of recovery efforts.

One is Tim Nolan, a nurse practitioner in North Carolina who has turned his Toyota Prius into a mobile emergency room. He drives to patients who otherwise couldn’t make it to rehab or a hospital.

Other street soldiers are Rev. Michelle Mathis and her partner Karen Lowe, who run a biracial effort to wean addicts off of opioids.

There are many other examples of people working around the system to get something meaningful done about the crisis. Macy spends so much time with them and reports so deeply that her compelling case can’t be ignored.

Like many others, Macy is frustrated that justice has not been served by making the root of the crisis accountable. That root lies within the Sackler family, whose Purdue Pharma introduced OxyContin, a high-dose opioid, in 1996. Its predecessor painkillers date back to the early 20th century.

Purdue was very aggressive in marketing its painkiller to drug companies and doctors. It bought visibility by donating millions to Harvard and art museums in exchange for sticking their names on businesses. One beneficiary was Tufts University, which put the Sackler name on a medical school building after receiving big money. Tufts took the name off after a public outcry. (Full disclosure: I am a Tufts graduate as are or were four other members of my family.)

Macy notes that despite massive investigations, lawsuits and Purdue’s bankruptcy, the billionaire Sacklers seem to have emerged unscathed. Their lawyers smartly got them excluded from punishment.

I was a little disappointed that Macy did not delve more deeply into the business aspects of this. But then she might be wise not to do so since there are many other accounts that cover that same ground.

Another recent book that goes into this turf is “American Cartel: Inside the Battle to Bring Down the Opioid Industry,” by Washington Post reporters Sari Horowitz and Scott Higham.

In an interview with National Public Radio on Aug. 2, Higham said it is very difficult to get the usual opioids in this country these days because manufacturers are under such intense scrutiny.

This hardly means they are not being made anymore. Mexican cartels have inherited the trade, he said.