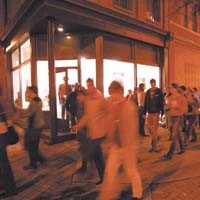 Casey Longyear looks far from criminal when she enters her guilty plea in Richmond criminal court. The diminutive young entrepreneur's short bobbed hair bouncing, she nods when the judge asks if she understands the implications of her decision not to contest a charge.

“Yes, your honor,” Longyear says quietly, accepting a plea agreement that means prosecutors will drop a charge of failing to pay taxes on admissions to a May rock show at Rumors, her used clothing boutique on Harrison Street.

In exchange, at the hearing late last week, she accepts a suspended $1,000 fine for forgetting to renew her business license, an offense — punishable by up to 12 months in jail — that prosecutors acknowledge is common among city businesses.

But her plea seems unlikely to end the art and music community's fears and concerns at recent revelations that the city's code enforcement officials have been paying close attention to the galleries, clubs and other small businesses where Richmond's nascent cultural scene has spent the past decade germinating.

Many are growing concerned that Richmond's building code and other regulations, as enforced by the city's Community Assisted Public Safety program, or CAPS, could threaten recent gains in the arts and culture community.

Even as Longyear makes her way to the basement courtroom in the city's crumbling Public Safety Building to enter her plea, Christina Newton meets with Mayor Dwight Jones and members of his administration to talk about concerns shared by Broad Street art gallery owners: Little stands between them and similar dates with the judge.

“Everyone is behind the original mission of the CAPS program and wants them to enforce control of crime and blight,” says Newton, director of Curated Culture, a nonprofit that fronts Broad Street's wildly popular monthly First Fridays Art Walk.

Indeed, the program essentially is a task force that pulls together building and city code enforcement officials, fire officials and city police, among others, to target crime-infested neighborhoods one building at a time.

Newton calls her meeting with the mayor productive, giving her hope that code enforcements would not aggressively target First Fridays participants. “But [the program is] opening Pandora's box,” she says, “and you cannot pick and choose who you decide to pursue. It's inequitable.”

In other words, Newton acknowledges, Broad Street galleries are guilty of many — if not more — of the same offenses as Longyear and a handful of other arts-oriented businesses that authorities recently targeted. Such offenses are common, if not unavoidable, for any business opening its doors in long-neglected buildings that in many cases were built more than half a century ago, Newton says.

Her message to the mayor was at least enough for his administration to schedule a second meeting with Newton. That takes place this week.

“The mayor is looking for a way to strike the proper balance where the CAPS issue is concerned,” says mayoral spokeswoman Tammy Hawley, who confirms last week's meeting, saying that balance is somewhere between protecting public safety and finding “a process in place that's not impeding any growth or operation” of local businesses.

Newton isn't the only one speaking out about program and the potential for piecemeal application of code enforcement.

On the heels of a Style Weekly cover story May 27 about such enforcement, last week's local Internet traffic buzzed with efforts to unite the city's music scene.

“Someone should let all the members of this group know when the next council meeting is and we should show up with as many people as we can get out,” wrote Sean Patrick Rhorer wrote on the page.

If ever there were a time not to lay down the law on otherwise legitimate business owners, Newton says — especially those who have pioneered a major resurgence in the city's Broad Street corridor — it's now. The pinched economy has hit art galleries hard, and has left Curated Culture struggling either to survive or to find a successor.

“A lot of people are feeling like, why bother?” she says. “It's so discouraging.”

Newton says she's shuttering Curated Culture's storefront on Adams Street in an effort to stay afloat. During the seven years that the First Fridays Art Walk has drawn thousands of Richmonders back downtown, the city has provided about $4,000 to this economic-development activity.

“The feeling was always that they were doing us a favor,” says Newton, whose frustration only grows when she hears about the $400,000 the city is pumping into construction of a concession stand at Byrd Park. Meanwhile, she confirms that Curated Culture has been in discussions with Venture Richmond and the Richmond Arts Council “to create sustainability for First Friday.”

She stops short of talking about the potential for a merger, citing her personal concerns that neither group fully grasped the grass-roots mentality that has fueled First Fridays' success. But, she says, “Our missions are in line in that we're promoting downtown.”

She says Richmond's arts community is at a crossroads right now, gasping for air as the economy contracts and as the city fails to nurture the one event that has succeeded in drawing suburban crowds back downtown.

“You can't just put a flag up and say, ‘Here’s an arts district,'” she says. Her greatest hope is that the recent enforcement lesson will serve to wake up city administrators to the plight of small, arts-oriented businesses, perhaps leading to an official designation of that arts district, under a provision she says is allowed by state code.

With such a designation, Newton says, “you can designate regulations or forgiveness on [building] codes in a specific district.”

It's an idea first discussed officially in 2003 during a series of meetings between the city's economic development authority, Richmond Renaissance, and the Arts Council.

Made most glaringly obvious by the Rumors bust is that the city's codes simply are outdated — they don't account for modern city businesses that might be art galleries by day and performance spaces by night, then transform into something entirely different for events the next morning.

That same 2003 task force also recommended simplifying or easing many of these code requirements inside designated arts districts.

“Richmond is an amazing place — but with no identity,” Newton says, echoing recent frustrations expressed by area museum directors worried about the city's lack of a unifying message for tourists and visitors.

“We don't market ourselves well,” Newton says. “We've got a living downtown — a living, breathing, lively place where people want to be. The city should be shouting from the rooftops about what's here.” S