Cuisine at a Crossroads 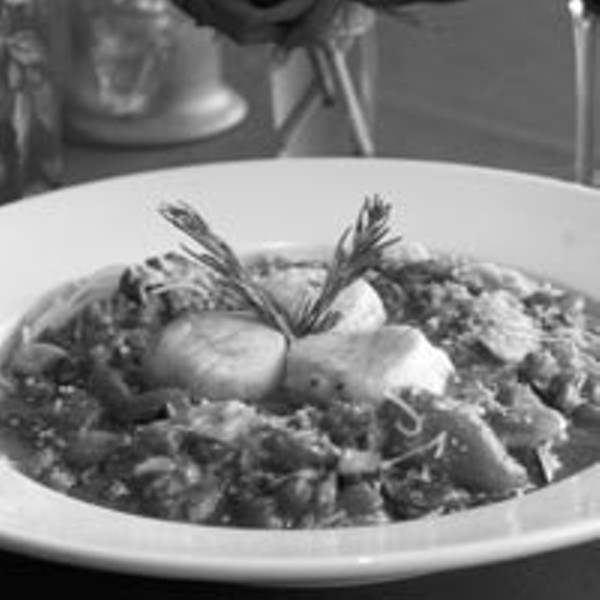 That's because there's confusion about what this restaurant is trying to be. The menu plainly states that "no one comes to Bellagio by accident," in reference to the mountain resort town from which this new eatery draws its name and supposedly its theme. But that's a bit deceptive when you consider the natural leaning of the partnership towards a more exciting and flavorful fusion.

The new partnership of Kaveh Marrefi, Elchin Bagirov, and Donavan Scott is energetic and friendly. Marrefi, who identifies himself as Persian by way of Sicily, runs the front of the house, bartending and serving as the charming host most evenings. Bagirov, who hails from Azerbaijan and holds a degree in business management, handles most of the financial details. The chef, Donavan Scott, a Jamaican-Scots-Irish New Yorker is the third partner.

Given some time to assess what is working and what isn't, I feel confident that they'll find their niche. I hope that they'll follow their inclinations toward a real fusion focusing on Chef Scott's Caribbean flair.

The overall quality of the food is very high, and everything is prepared in-house, from the veal demiglace to the fresh breads. With a well-seasoned Culinary Institute of American graduate at the helm in the kitchen, this is to be expected. What wasn't expected was that the dishes described on the menu in classic terms were in some cases quite different from my previous experiences of them. And sometimes expectations are everything.

The minestrone's sour flavor caught me off-guard. I'm used to a very straightforward, hearty soup of vegetables in beef broth with Ditallini pasta. This was not that, and what's more, the sourness made me think that the soup had turned. It wasn't until I consulted the chef that I found out that this was his "interpretation of the Italian classic with a Jamaican accent." That accent was the vinegar reduction responsible for the sour aftertaste.

Some of these interpretations have yielded very pleasant results, such as the Red Snapper Pescato, which is pan-roasted and finished with an escoviche sauce that Chef Donavan admits to stealing from his Jamaican grandmother. He also sneaks habanero peppers into the penne arrabiata, creating a seriously flavorful vegetarian entrée that was satisfying in both heat and quantity.

Conversely, some of the classic Italian entrees that were more traditional seemed to be lacking the depth of the nontraditional offerings. A particularly lifeless dish was the shrimp scampi, which was good and garlicky, but lacking any complimentary flavors. If the sauce had been emulsified it might have stood up to the accompanying linguini, but the pasta only carried the monochromatic flavor further without enhancing it. A baked artichoke appetizer was a better execution of the classic style. Ripe Roma tomatoes garnished the lightly breaded bulb and perfectly accented the lemon and garlic that infused the dish.

The uneven execution of the menu is mirrored by the décor and service. Some of what's going on here is wonderful, and some of it's still coming together. The maitre d' asked us where we would like to sit; after looking around at the nearly empty dining room, we decided on a window seat overlooking the parking lot. He joked, "Oh, a view of the waterfront!"

In fact, the view is better than you might expect from a strip-mall restaurant. The crossroads area hasn't been overdeveloped yet, so the trees in the distance lend a pacific quality to the atmosphere. But the tables are adorned with artificial flowers and the walls are rather stark. Our young server seemed very unsure of himself and had trouble juggling the glasses and plates as he approached our table with each course.

Any one of these things could be easily overlooked, or in the case of the nervous waiter, create a quirky kind of charm in a restaurant. However, with entrees ranging from $16.95-$26.95, I'm expecting a bit more expertise in the service, fresh-cut flowers and some art on the walls, but in all fairness, this is a brand new restaurant. I was told to expect a new menu in the next month or so that will retain the Italian dishes while expanding the palette of offerings. I'm hoping that they'll take advantage of the diversity they possess and design a menu that shows more fusion in its foundation than in its confused accents. S