by Julian Walker / The Virginian-Pilot 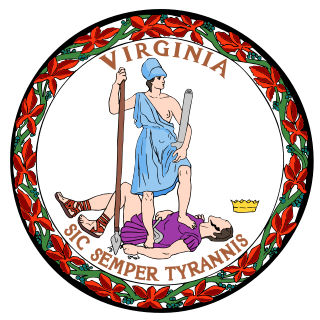 Update May 3: Washington Post reports that Cuccinelli intended to "offer a different and historic pin, not because he was looking for a more modest symbol." The Roanoke Times has an update here.

The seal depicts the Roman goddess Virtus, or virtue, wearing a blue tunic draped over one shoulder, her left breast exposed. But on the new lapel pins Cuccinelli recently handed out to his staff, Virtus' bosom is covered by an armored breastplate.

When the new design came up at a staff meeting, workers in attendance said Cuccinelli joked that it converts a risquAc image into a PG one. The joke might be on him, said University of Virginia political scientist Larry Sabato.

“When you ask to be ridiculed, it usually happens. And it will happen here, nationally,” he said. “This is classical art, for goodness' sake.”

It wouldn't be the first time that Cuccinelli has found himself in a punch line since taking office. The conservative Republican made Comedy Central's “The Daily Show” in March after he advised state colleges and universities they lack the legal authority to protect gay employees from discrimination. “You can't be gay in college?” host Jon Stewart asked in mock disbelief. “That's the whole point of going to college!”

If the jokes start to fly, Cuccinelli can't say he didn't see it coming, Sabato said — not after what happened in 2002, when U.S. Attorney General John Ashcroft ordered drapes installed to cover partially nude statues at the Justice Department. “Ashcroft had one excuse: it hadn't been done before and he wasn't prepared for the critical onslaught that he faced,” Sabato said. “Cuccinelli has no excuse at all. He knows what's coming because of what happened to Ashcroft. You can only conclude that he enjoys being the center of pointless controversy.”

Efforts to reach Cuccinelli on Friday were unsuccessful.

His spokesman, Brian Gottstein, said the pin was paid for by Cuccinelli's political action committee, not with taxpayer funds. He acknowledged that the attorney general has pointed out Virtus' “more modest attire,” adding that the rendition chosen by his boss “harkens back to an older version of the seal.”

The Great Seal of the Commonwealth is a two-sided image that dates to 1776. The side depicted on the state flag features Virtus standing victoriously over Tyranny, a male figure prone on the ground in defeat, his crown fallen from his head. Beneath him is the motto Sic Semper Tyrannis: Thus Always to Tyrants. Three Roman goddesses — Libertas, Aeternitas and Ceres — grace the reverse side of the seal. Cuccinelli isn't the first to have less-revealing garments placed on Virtus.

Multiple varieties of the seal have been used over the years, said State Capitol historian Mark Greenough. The modern version is based on language added to the state code in 1930, which specifies that Virtus is “dressed as an Amazon” while clutching a spear in one hand and a sword in the other.

The secretary of the commonwealth, Janet Polarek, is charged by law with being the keeper of the seal. Asked for an assessment of Cuccinelli's interpretation, she declined to offer an opinion. When Virtus was fighting Tyranny, Polarek said, “a dress code was probably not her first concern.”