Cuba on the James

A free weekly dance party heats up Havana '59 — and the city. 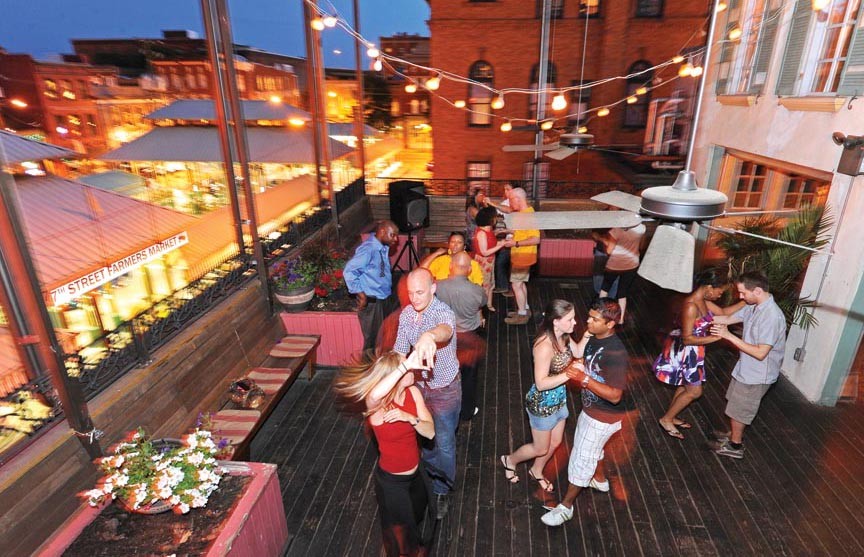 Every year, as spring bleeds into summer, and the weather gives way to oppressive heat, city dwellers will instinctively migrate toward two places: the beach and somebody's roof.

The latter location holds a special fondness for scene-seeking urbanites who'd sooner construct a beach out of kiddie pools than head to some tourist-infested boardwalk. A beach, after all, is a great place to escape and tan, but on a school night, city adults want to talk, flirt and have delicious cocktails someplace cool — both figuratively and literally. And what could be cooler than mingling outdoors, looking out on the skyline of the city you love?

Too often, though, rooftop parties are invite-only rarities that occur at someone's condo or apartment or at some boutique hotel. They aren't spontaneous, and they aren't just happening everywhere. You have to know somebody.

That's not the case at Havana '59. The Shockoe Bottom restaurant plays host on Thursday nights to what's quietly becoming the fail-safe, why-aren't-you-here party. It's called, a bit uncreatively, Salsa Night, but when visitors climb the stairs to arrive at Havana's spacious patio, stories above the rest of the city, to find twinkling lights and bright music, they'll probably care little about clever names. It's a cute place to be. And, for now at least, it's free.

"When it comes to [salsa] dancing, they have the best idea," says Jermaine Alley, who's been a regular on Richmond's salsa music scene since the late '90s. He is, nearly every week, one of the devoted dancers easy to spot for enthusiastic, almost acrobatic stepping. "They take advantage of the Cuban cuisine connection, being under the stars," he says. "It works. They have the whole atmosphere, except for sand."

Indeed, the roof is great. But it's the music here that makes the event exciting. A disc jockey spins traditional salsa, and a spectrum of Latin music including merengue, bachata and splashes of reggaeton — duh, considering the venue — and dancers range in skill from bumbling amateur to gifted pro. Yet there's no sense of competition. Should would-be dancers feel inept, they can arrive early for free salsa lessons before the floor opens up to partygoers. Management supplies tortilla chips and fresh salsa too, adding to the sense of community and family that good parties are made of.

"We really enjoy seeing people dancing, and that it brings people from downstairs," says the general manager, Mark Perkinson. Salsa Night started in October, but gained stamina now that the weather demands we frolic outdoors. There's some competition from other, similar, events in town, he notes — Emilio's in Short Pump is host to salsa Thursday as well — and while the restaurant's night has endured peaks and valleys (Havana might consider a cover charge to ensure profitability), it's surely one of the sexiest places to party in the actual city.

People of all stripes (and quite a few of them gorgeous enough that you'll catch yourself gawking) populate the motley crowd and, as is the case wherever salsa music is playing anywhere, legions of former New Yorkers with Spanish roots electrify the floor with fast twirling, daring dips, locked hips and ("Wepa!") spirited cheers.

"It's marvelous," says Clara Taro, herself a "Nuyorican" (New York City Puerto Rican) transplant to Richmond, and promoter of this night. She's been booking salsa parties in the area since 2006. The Richmond salsa scene is a close-knit, roving family, she says. "There's Caucasians, Asians, Indians, African-Americans: It brings all kinds of people together and I love that. I love exposing our culture. My goal is to expose salsa as much as possible."

Latin music, of course, is some of the sexiest music there is, and if you're lucky enough to catch a kind breeze, holding one of the mojitos handed out like communion wine and to overlook river city under the string lights that are part of Havana's cute Cuban kitsch décor, you can't help but feel transported; it's as if the night was made just for you. It's the stuff summer memories are made of and, for now, it's attended by just a select crowd of the really-in-the-know.

"The spirit is high, the music is great," Alley says. "I hope people keep going." S