One of the most imaginative and unusual animated films of the year, “Cryptozoo,” by Richmond-based director and comic book writer Dash Shaw, is set in the 1960s but its apocalyptic visions feel more current. During a year marked by a steady diet of cataclysmic weather, global pandemic variants and what feels like storm clouds gathering over humanity’s prospects, a film this phantasmagoric seems par for the course.

The movie, written and directed by Shaw with hand-drawn animation directed by his wife, Jane Samborski, used Virginia Commonwealth University students as interns throughout a roughly five-year process. A hypnotic mix of layered pencil drawings, wash paintings and traditional cel animation among other techniques, many of the frames appear bathed in subtly shifting, kaleidoscopic color. Shaw's visionary approach recalls work such as Winsor McCay’s unfinished 1921 film “The Centaurs”  – which he previously told Style Weekly was a primary influence – as well as the French sci-fi classic, "Fantastic Planet" (1973), early Dungeons and Dragons monster manuals and for me, even a mash-up of “Pee-Wee’s Playhouse” with the vibrant sketch journals of Frida Kahlo.

Dash’s debut animation film, “My Entire High School Is Sinking into the Sea” (2016) featured Lena Dunham, Maya Rudolph and Reggie Watts. This time out he utilizes the voice talents of actors Michael Cera, Lake Bell, Zoe Kazan – granddaughter of legendary director, Elia Kazan – Peter Stormare (“Fargo”) and Grace Zabriskie, known for her work in David Lynch and Gus Van Sant films. “Cryptozoo” screened virtually at this year’s Sundance Film Festival where it won the Next Innovator prize and was purchased by Magnolia Pictures. It debuts in Richmond this Friday at the Byrd Theatre for a weekend run, with the filmmakers appearing at a special screening on Thursday, Aug. 26.

Regarding the story: The meandering plot involves crypto-zookeepers attempting to save mythological endangered creatures from a U.S. government that considers them bio-weapons. Especially one of them known as baku, a kind of baby elephant/aardvark-looking hybrid that slurps up people’s dreams, which apparently is useful to military poachers who bark commands like, “If anyone’s taking that gay horse, it’s me.”

The dialogue can be hit or miss; in its review of "Cryptozoo," Variety’s critic Jessica Kiang wrote: “[the film’s] allegorical power, despite the presence of so many wondrous supernatural beings, and the references to everything from Greek myth to the Garden of Eden to Celtic fairytale, maxes out at a kind of generalized ‘be respectful of folks who look different to you.’” 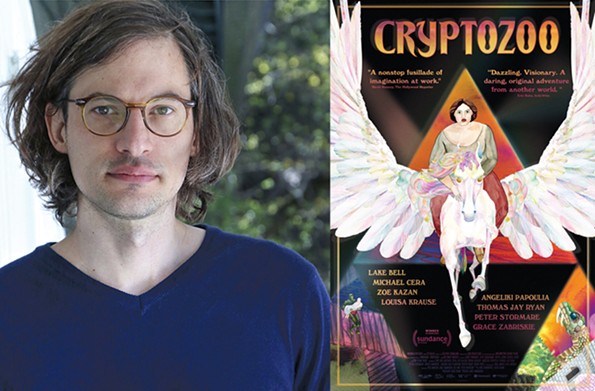 Messaging aside, this isn't an animated film for kids. The memorable opening scene features a couple of tripping hippies having sex in a dark void of woods before one of them (Cera), climbs a massive fence while his girlfriend comments on his “swinging balls” from below. Above it all, he imagines storming the Capitol for a utopian revolution (hmm) before thinking he sees a Disney compound in the distance, which quickly leads to him being violently dispatched by a unicorn.

Sexuality and violence pop up throughout the oddly childlike, Where’s Baku adventure, which can be a little jarring, almost as if the ’80s animated fantasy “Heavy Metal” was being used to illustrate a Sunday School lesson about bio-diversity or animal rights. Stuff doesn’t always feel like it goes together but it's easy to admire the ambition on display. It all builds to an action-packed finale where Shaw personalizes the cataclysmic spectacle of most superhero movie endings.

Like “Heavy Metal,” I wouldn’t be surprised if “Cryptozoo” becomes a cult classic some day. It could find its audience among fans of international underground films such as “Son of the White Mare” by Hungarian animator Marcell Jancovics, or “Belladonna of Sadness” by a godfather of Japanese anime, Osamu Tezuka. Visually speaking, the movie follows its own intuitive logic while reminding us of creative, homespun alternatives to the latest digital sophistication of Pixar; though it could've used some of the latter's character development and narrative ability.

Style recently caught up via Zoom with Shaw, who was in Los Angeles promoting the film. The interview has been edited and condensed for space.

Style Weekly: Can you discuss your creative process on this?

Dash Shaw: I wrote and storyboarded it in 2016, then we recorded the first actors in 2017 and used that to get other people involved. We finished at the end of 2020, so for me, five years [later]. For Jane, my partner in life and animation, it was four years.

She graduated from the kinetic imaging department at VCU, lived with me in Brooklyn for 10 years and when our daughter was born, we moved back to Richmond. She got in touch with VCU who hooked us up with interns who helped with the movie – [and] we hired Emily Wolver, lead animator, who is a huge part of it. Jane trained Emily. They were really the animation team in the movie.

What do you feel gives this film its unique visual aesthetic?

I usually try to use the word collage, because it brings together different elements that shouldn’t work with each other. You’re trying to orchestrate. … Cryptids are painted one way by Jane and human figures are drawn by me in a different way, then [there are] half-human, half-cryptid characters so we’re physically compositing two different people’s paintings. A lot of the art I like is collagelike, like James Rosenquist.

Sometimes I call it Pop art because, to me, it’s familiar things that have been de-familiarized. It's like "Jurassic Park" or a blockbuster movie that's been distorted. … I call it a Pop art collage.

Do you see the hand-drawn process as a reaction to the overwhelming amount of digital animation and Pixar stuff?

Well, I have to say a huge part is I have no idea how to do CG animation. But from drawing comics, drawing on paper just makes sense to me. I never had aspirations to do [the other] or live action films. Just doing this was the goal, as positive or negative as that sounds [laughs].

Did you find the voice talent based on the success of your previous work?

Well, “High School Sinking” definitely helped. It premiered and had a good run at Metrograph Theater in New York. Kyle [Martin] the producer somehow had Michael Cera’s email or something, we invited him to one of those screenings and the same day asked him to be in “Cryptozoo.” Then we got him and Louisa Krause, I made that opening section with the lovers, using that to show other people.

With the story, did you want to comment on capitalism’s exploitation of the natural environment?

The first thing was making a mythological creature movie, writing something Jane would enjoy painting creatures for. Drawing and painting is our only way of seeing imaginary beings. Because of my personality, the other things invaded. That’s just where my mind goes to when thinking about radical beings or ideas that, in the attempt to introduce them to a larger world, are damaged.

One of the centerpiece scenes is a detailed tarot reading – which I read in the production notes you are into yourself?

Yeah, my dad read tarot cards. My parents have a lot of the hippie stuff going on, so they were around when I was growing up. In my twenties, I got into it hard as a personal hobby. I don’t read for other people, I pull cards for myself. Coming from comics, you can get into it like how you get into collecting comics, where you’re seeing your favorite characters drawn by different people.

I’d never seen a really in-depth tarot reading in a movie, it’s always a bit of a joke, or “you’re going to die” or something. So I thought it would be really cool to place [it] in the literal center of the movie at the 45-minute mark. It’s a long scene and kinda breaks down who the characters are, what they want, what’s going to happen. … It’s there for however many people are into tarot these days.

Granted, I watched a screener of the film late last night, but sometimes the nudity or violence can feel like it comes out of nowhere.

Nudity, I think, is one of the formal goals of the movie. I went to art school and spent years in figure drawing classes. You draw the nude figure and it’s like that Picasso thing of someone at this angle looks a little different if a drawing is done five minutes later at a different angle. There’s a whole world of personalities that exists inside a single being and that’s the human condition. If I could tap into some of that for an animated movie, because I’m lowering the frame rate, I can make quite wide leaps between drawings. Most animated movies are done on model. … [In the opening] I thought it would be beautiful and touching to have two nude people in a mostly dark space and have it be like animated figure drawing.

How did John Carroll Kirby’s electronic score come about?

He indirectly came through another Richmond filmmaker, Rick Alverson. I’m not a musical person, Rick plays in a lot of bands. I was telling him that I have to find a really special score for this movie, something we haven’t heard before. [He] got me in touch with the label Jagjaguwar and I talked to them and explained “Cryptozoo” and they recommended [Kirby] who had never scored a film, but had just done an album, “Travel,” which I thought was perfect. … I flew out to LA and met him, he didn’t seem interested, he was touring with Solange and Frank Ocean and all this stuff. So then, years later when the movie was ready, he was even more popular and busy. But the pandemic struck and he was stuck at home, so he said yes to scoring “Cryptozoo.”

Were there any big take aways you learned from this project?

Honestly, as the movies get a little bigger, the main thing I learn is interpersonal skills: talking to other people and trying to articulate why I’m making these things and getting more confident, socially.

So where can people see it and what’s next?

Well, opening weekend it will be at the Byrd, and we’ll be there on the 26th. But it’s also streaming on demand. The Byrd is just one of our most beloved locations that everyone knows. Jane and I growing up would go there. … I live like two blocks from the ICA and they have that incredible theater. I hope they’ll play “Cryptozoo” some day and that they do more screenings in there. There’s something about having a beautiful theater I can walk to. There should be screenings there every week.