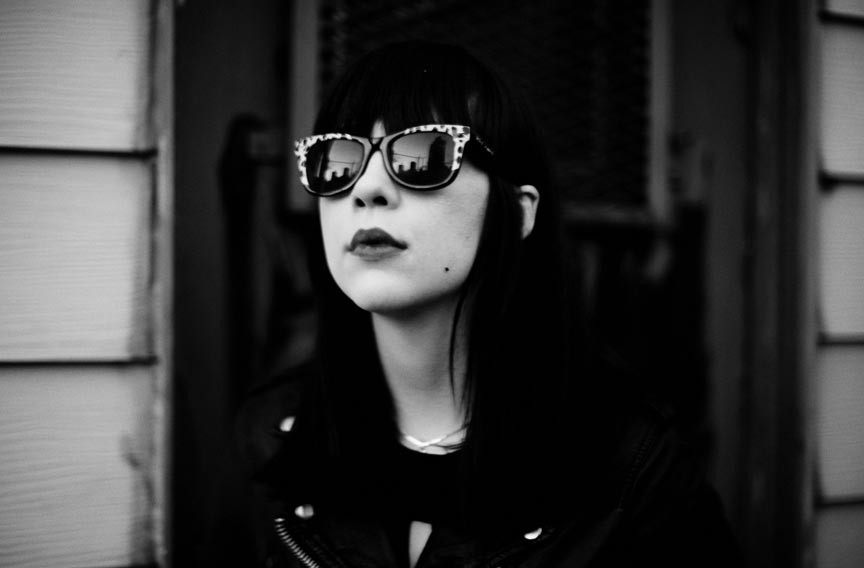 Dee Dee Penny is big on appearances. It isn't a preoccupation with pretty, but rather a visual complement to the music she makes as the frontwoman and lead songwriter of Dum Dum Girls.

Born Kristen Gundred, the 29-year-old singer is notoriously shy but finds assurance in her stage persona. "I'm compelled to perform and that compulsion is coupled with an attitude," she says. "It just happens."

From her signature striped stockings to perfectly lined eyes, Penny's too-cool-for-rock 'n' roll high-school image is precisely executed. She admits that even her fiery red pout is well prepared with matte lipstick that "must be able to withstand microphone abuse."

On stage, the four-piece — whose name pays homage to both Iggy Pop's "Dum Dum Boys," and the Vaselines' album Dum Dum — looks like a bunch of Siouxsie Sioux worshippers, united in fashionable confidence with a penchant for all things gauzy and black. It's in stark contrast to what you might expect from a group that churns out chipper, California fuzz-rock. But therein lies the genius of Dee Dee's creation. The singer acknowledges that there are more than a few misconceptions about her, but the most prominent: "That I sit around listening only to the Ronettes. Of course I love them, but right now, I sit around listening to the Cure."

It's all a far cry from the days of Gundred's recording anonymous projects under the Dum Dum Girls moniker in her bedroom and turning out homespun discs on her label, Zoo Music. After generating considerable underground buzz, she was signed to Sub Pop in 2009, assembled a band to take the songs on the road and so began the evolution of Dum Dum Girls. "I would've continued to write and record either way," she says, "but that opportunity cleared a path I wasn't anticipating."

Three years later, Dum Dum Girls have released a stunning, second full-length, "Only In Dreams." The most personal record to date largely was inspired by the untimely passing of Penny's mother after a shocking cancer diagnosis and the torment of distance brought on by conflicting tour schedules with her husband, Brandon Welchez, of the band Crocodiles. "I had no choice but to write about what was consuming me at the time," Penny says. "It was that or write nothing at all."

The result is a striking collection of crisply produced, upbeat-but-heartbreaking songs that showcase a vocally robust Penny belting her guts out and emerging triumphant over woozy guitars and high-hats for the first time on a Dum Dums record. She humbly chalks it up simply to "just singing a bit more than usual as appropriate for the topic and feel." Critics and fans alike sum it up simply as a career-defining album containing some of her best songwriting yet.

Penny hopes that as the group continues to grow, it will be seen as more than just an all-girl band. "It's annoying, but I suppose it's still not that common, so it's a point of reference," she says. "I hope to rise above the wave of banal descriptions with every release." S

Dum Dum Girls will perform with De La Soul, Yo La Tengo, Shabazz Palaces, Kepone, Kid Is Qual, Invisible Hand and Photosynthesizers on April 28 as part of the Shadrock Music Festival. All-day passes are $35-$100. For tickets and information, go to Shadrockmusicfest.com.