A Richmond artist scores an in-depth interview with the reclusive godfather of underground comics. 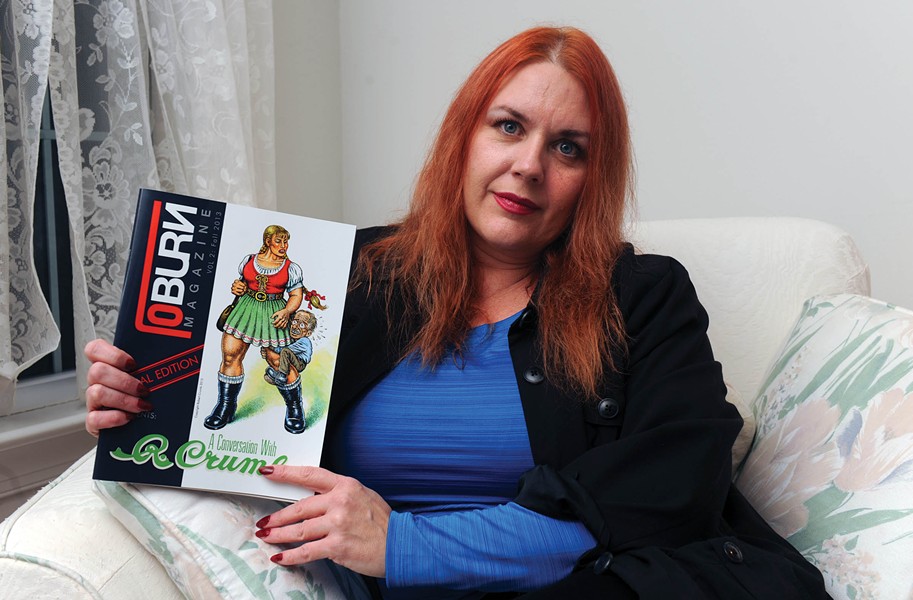 Scott Elmquist Local artist Lana Gentry always loved the counterculture art of illustrator Robert Crumb, which helped her reach him in the South of France for a candid interview.

Facebook has been hounding local artist Lana Gentry lately. In its ever-expanding collection of our personal traits and buying preferences, the social media behemoth is demanding that Gentry clarify something in her bio section: Is she a "self-taught" artist or did she really attend "Satan's School for Girls"?

"It was the former," the 49-year-old Gentry says, laughing. "I really consider my art a hobby, but I come up with a few good projects a year."

To help understand her dark sense of humor, you need only listen to Gentry talk about her upbringing. Her father was a cultish, Pentecostal preacher who was pursued by the FBI on drug charges, she says, and was in and out of prison several times.

"He was extreme and obsessive ... a charismatic faith-healer kind of thing," she says, noting that he had a church called the Gospel Mission in Manchester. "He was underground running from the FBI for a long time."

Gentry is an artist and freelance writer whose graphite drawings have hung in several larger cities — including an exhibit in Shanghai, China, last year. She thinks of her "pencil [drawings] as a form of journaling," she says about portraits of friends and herself with accompanying text. Gentry says she hasn't shown in Richmond in many years, but continues to display her work in other cities. Her illustration of Ayn Rand's "The Fountainhead" cover is scheduled for a group show next month in Seattle.

Gentry can thank her father for discovering the controversial art of legendary underground comic artist Robert Crumb. Once Gentry saw the 1994 documentary "Crumb" by Terry Zwigoff, she became even more interested because of Crumb's penchant for brutal honesty in his work — sometimes labeled misogynistic by critics for its often sexualized and occasionally violent depictions of women.

"I had so much admiration for him overcoming his strange and difficult [family] circumstances," she says. "Getting an interview was the ultimate for me."

Gentry first contacted the reclusive Crumb several years ago at his home in France. She didn't hear back for several years and then tried again last year. Soon she received a letter from Crumb, 70, saying he didn't like to do interviews anymore, but he asked her to make her pitch again. "He said 'It's not possible you're a fan, because I don't have any female fans,'" she recalls.

Gentry speculates that she finally may have piqued Crumb's interest by telling him about her family history. But the artist and his wife didn't believe her story until she sent them documentation, she says: "I sent them pictures of my father's church and a religious tract [or brochure] with my father's mug shot and his reinvention as a minister. That put him more at ease."

Crumb eventually granted her a wide-ranging, in-depth interview that recently was published in a new art journal started by Gentry's friends, LoBurn, based in Philadelphia [one co-founder is Richmond native Hope Harris Bellgren]. Gentry says she had some initial interest from bigger magazines, which wanted to edit the long interview, but she refused, opting to run the entire conversation. Topics include Crumb's relationship with his female readers and his best-selling graphic illustration of the Book of Genesis. "He was extremely polite, kind and interested in engaging me in the interview," she says. "I've never really seen him as a misogynist; I'm not easy with that word."

The article features several Crumb drawings for which Gentry secured the rights — not an easy task considering the artist is "very old-fashioned" and refuses to use a computer or mobile phone, she says. During their phone interview, Crumb seemed to appreciate Gentry's insight into his male characters.

"I always saw his male characters as benign, impotent, tragic little creatures controlled by their obsession with women," Gentry says. "I think a lot of women miss that. I saw [Crumb] as this fearful creature that wasn't controlling or abusive at all — he has been married for years and worships his wife. He understands why women feel his work is misogynistic or angry, but he grew up as a nerdy character who couldn't connect with women until he was famous and rich. I saw the characters as pitiful."

Gentry says part of her goal was to reintroduce Crumb to a younger generation, but also she wanted to distinguish her interview from others. She manages to get fairly candid, conversational answers. "Personally, I was happy to hear that he agreed with me and didn't think artists were generally any more unstable than other people," she says.

While the LoBurn issue hasn't been widely distributed, Gentry says there's been good feedback on the article and that some Crumb collectors have purchased it. But she hasn't heard anything back from the artist since the interview came out.

"I hope to hear back from him some day, but I'm content if I never do" she says. "Getting the interview itself was really the goal. ... I appreciate any artist that is honest and takes risks. And he took major risks." S

The issue of LoBurn magazine with the R. Crumb interview is available online at here at hyaenagallery.com/bookgallery.html.