Mel Gibson’s obsessive essay on the suffering of Jesus. 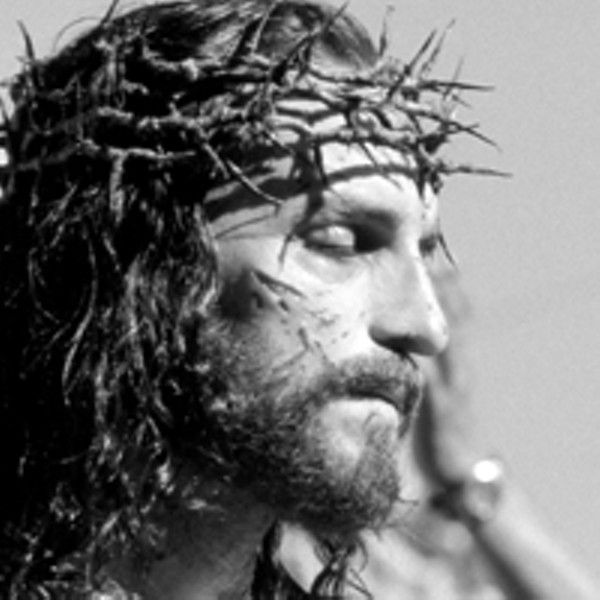 This gratuitous gesture perfectly captures the spirit of Gibson’s ghoulish “The Passion of the Christ.” Like the Eskimos who were said to resist the Gospel until missionaries replaced phrases like “the lamb of God” with “God’s little seal,” Gibson seems able to come to terms with the Christian narrative only by translating it into a language he understands, the language of blood and torment perfected in Hollywood over the course of his own career. This has to be one of the least spiritual stories ever told.

Except for a few brief flashbacks, “The Passion of the Christ” focuses exclusively on the gruesome culmination of Jesus’ life on earth. Playing the title role, James Caviezel at first has an air of stony resignation, which then gives way to an hour-long session of suffering as he’s stripped, beaten, spat upon, whipped and nailed to the cross. Jesus’ blood fills the screen, but so lacking is any trace of his burning love for humanity that one can only wonder how he attracted a following in the first place.

It is odd that Jesus should be presented as something of an enigmatic cipher, but even odder is Gibson’s decision to elevate, of all people, Pontius Pilate (played by the skilled Hristo Shopov) to the status of tragic hero, reluctantly forced to execute an innocent man. When treating the meaning of Jesus’ sacrifice, Gibson sticks to the terse statements offered in the closing chapters of the Gospels, but Pilate’s predicament inspires him and screenwriter Benedict Fitzgerald to create pages of invented dialogue. A film that displays virtually no curiosity about God’s redemptive plan lavishes attention on Mrs. Pilate’s conversion to Jesus’ teachings, and on the way, Roman politics puts the squeeze on provincial governors caught between a wrathful emperor and uppity natives.

There’s a document that Gibson might know — it’s called the Apostle’s Creed — stating flatly that Jesus “suffered under Pontius Pilate.” Gibson effectively tags this line with an asterisk meaning, “Let’s face it: The Jews made him do it.” Gibson works hard to imagine how a civilized man like Pilate could sanction barbarity, but the role of the Jews incites him to no such labor. Sometimes mumbling, sometimes howling, always malevolent, the Jewish high priests and their followers wheedle and storm until they get their way, and Gibson no more attempts to understand their motives than he would if they were a swarm of killer bees. Like the leering, androgynous Satan, who slithers through the film (another Gibson touch), they are perversity incarnate.

Despite his fondness for events lacking scriptural or historical foundation, Gibson has laughably claimed that his intent is to restore a sense of “realism” to a story whose hard facts have been suppressed in blockbusters like “Ben-Hur” and “The Robe.” All he’s done, however, is to trade in the Hollywood conventions of yesteryear for the crasser, more bloodthirsty conventions of today. Thus in the appallingly protracted depiction of Jesus’ scourging, the Roman soldiers’ recklessly wielded implements of torture fill the air with gobbets of the victim’s flesh — just the kind of thing that three decades of slice-and-dice flicks have accustomed us to. But through it all, Jesus’ loincloth remains miraculously intact and in place. Gibson may be willing to play fast and loose with the Bible, but not with the canons of taste mandated by a still higher authority: the Motion Picture Association, whose NC-17 rating means box office poison. So much for realism.

Perhaps the most interesting, if slightly pedantic, stab at authenticity is the dialogue, spoken entirely in Aramaic and Latin. While this may make for period flavor, it puts yet another kind of distance between us and Jesus, and given the film’s reluctance to reveal much of his character, more distance is the last thing we need. As it is, the gory spectacle fails to offer hope or enlightenment. It doesn’t exalt. It numbs. * S