How a crew of VCU film students got the rare opportunity to make a Hollywood version of “Macbeth” in a stretch limo. 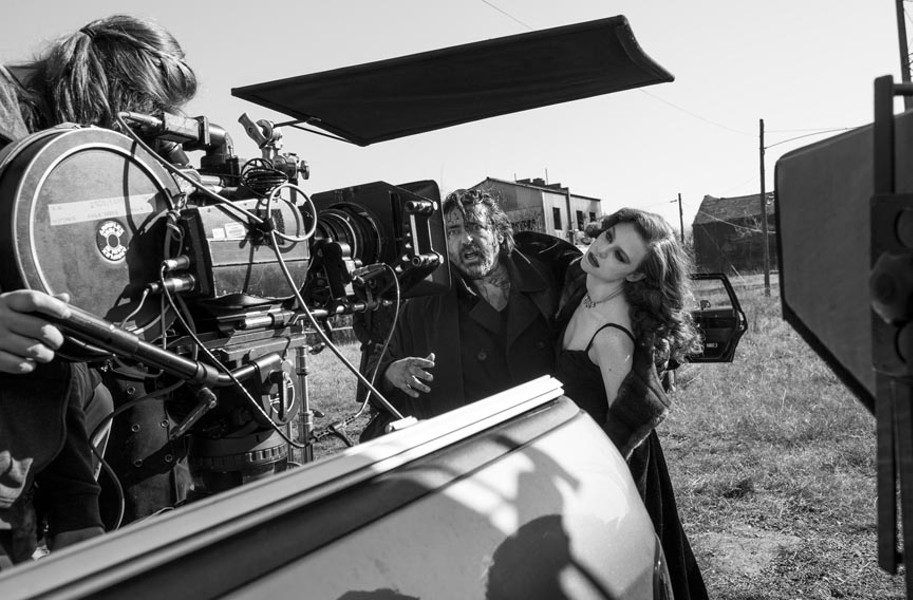 Tania Fernández Actor Angus Macfadyen, who wrote, directed and stars in a new version of "Macbeth," shoots a scene with Taylor Roberts, who plays Lady Macbeth. Macfadyen, who's producing the film in partnership with VCU, plans to debut it on the festival circuit this year.

Back in 1999, Angus Macfadyen was playing Orson Welles in director Tim Robbins’ “Cradle Will Rock,” when Vanessa Redgrave innocently asked him, “Do you think Orson’s ‘Macbeth’ is any good?”

“I just looked at her and I said, ‘You said the word,’” Macfadyen recalls.

It’s a long-held superstition among thespians to refer to “Macbeth” as “the Scottish Play,” in fear that doom and disaster will follow the mere mention of Shakespeare’s 1606 masterpiece inside a theater or during the staging of a play.

“She looked at me and said, ‘You don’t believe in that nonsense, do you?’” But by the end of the day, Macfadyen says, “somebody had almost cut their thumb off and the entire day’s filming … got overexposed.” 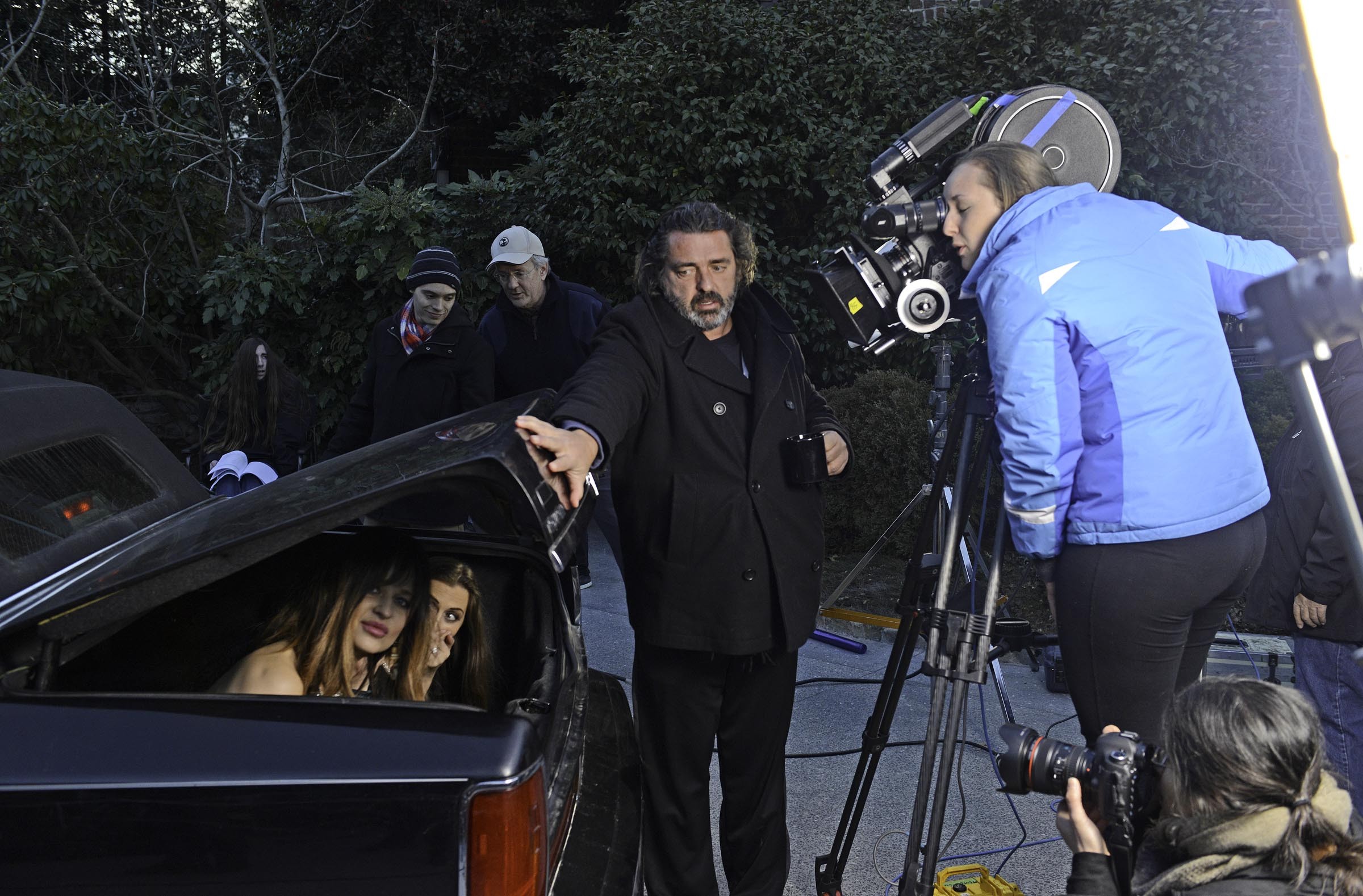 Fortunately, no such plagues have beset the Richmond-based shooting of Macfadyen’s 2015 indie feature film of “Macbeth” — perhaps because most of the movie was filmed within the confines of a black, 1997 Lincoln Town Car stretch limo. Originally owned by a Texas oil mogul, the limo was acquired from a seller in Powhatan County through a Craigslist ad spotted by Macfadyen.

This is an avant-garde re-imagining of the Shakespearean tragedy — written and directed by Macfadyen, best known for his role as the conflicted Scottish nobleman Robert the Bruce in Mel Gibson’s “Braveheart,” which won the 1996 Academy Award for best picture. He also appeared in the “Saw” horror franchise but says wryly that bringing up that role is “a saw point” for him.

As for “Macbeth,” it may feature Macfadyen in the lead, but Virginia Commonwealth University is playing a starring role in a unique and rare kind of partnership that’s a first for VCU. 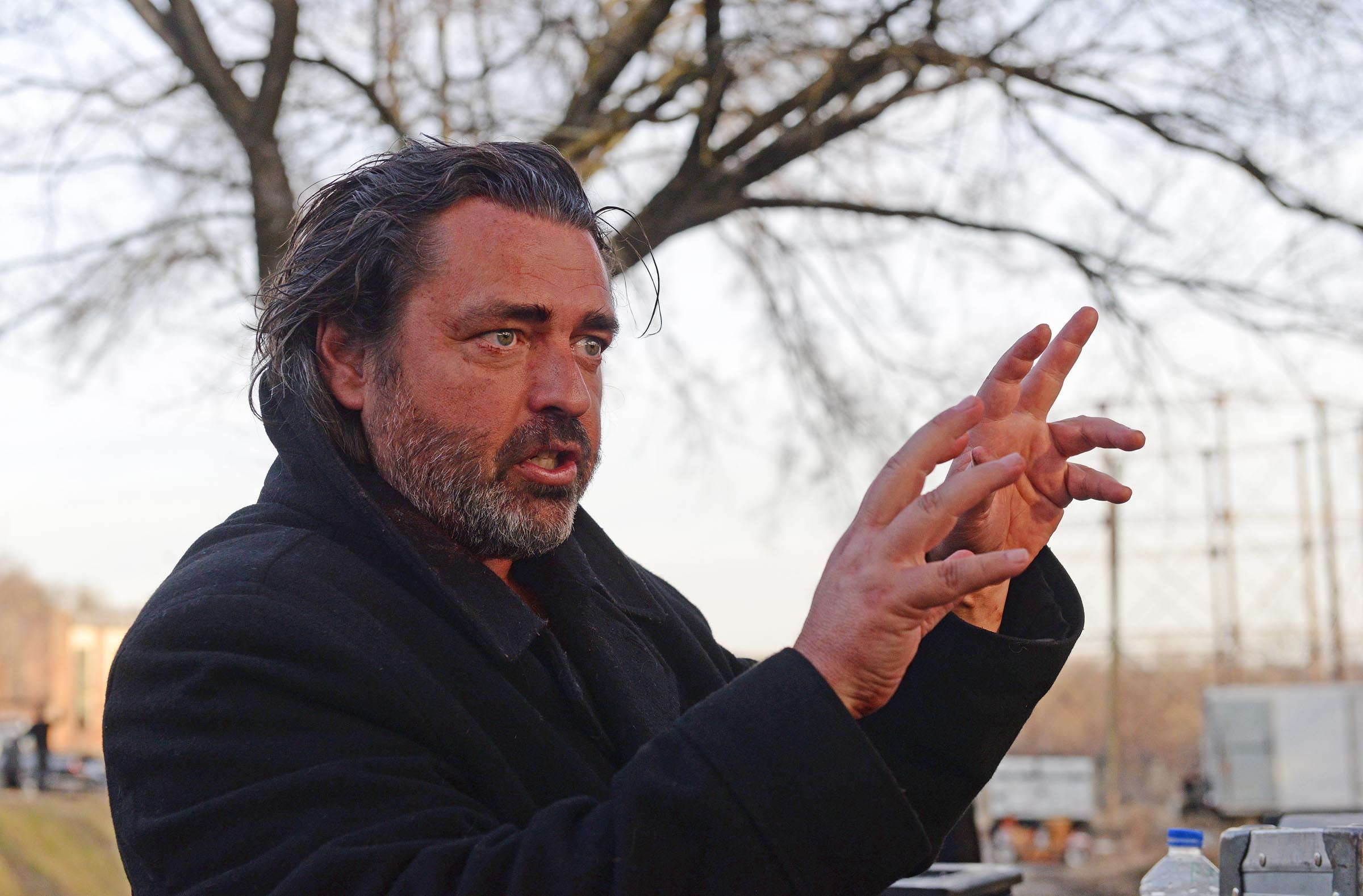 With a Virginia license plate reading “LADY MCB,” the 30-foot-long stretch limo is parked in the brick-paved driveway of a tony Cary Street Road estate. The gaping maw of its open trunk provides a handy receptacle for the many corpses that stack up in Macbeth’s wake, which on this afternoon includes Roukin. He cracks a joke about “spooning” while he folds himself into the trunk alongside his similarly bloodied “Turn” co-star Daniel Henshall.

“To me, the limo represents our fate, constantly moving,” says Taylor Roberts, who plays Lady Macbeth. A film noir buff, she patterned her performance after silver-screen femmes fatales such as Ava Gardner in “The Killers.”

“We are really only trapped in this small, moving thing once we’ve done the deed and killed the king,” Roberts says. “After that, there is no turning back. It’s a one-way street ‘all the way to the end of the line,’ as they say in ‘Double Indemnity.’”

With Henshall’s and Roukin’s scene shot and the daylight fast dwindling, Macfadyen thanks his friends from “Turn” and quickly moves to a scene featuring the three witches, portrayed as a trio of glamorous young socialites.

“It’s quite a claustrophobic story,” Macfadyen says about the central idea of using a limo in his film.

“Once [the Macbeths] acquire the power, they never go out,” he says. “They become agoraphobes and afraid of what’s out there, so it really worked within the context of that. They never see the light of day — they become almost vampires. And they go slowly mad inside this space, which really becomes the symbol of the modern-day couple in their house where she’s mad at one end and he’s mad at the other.” 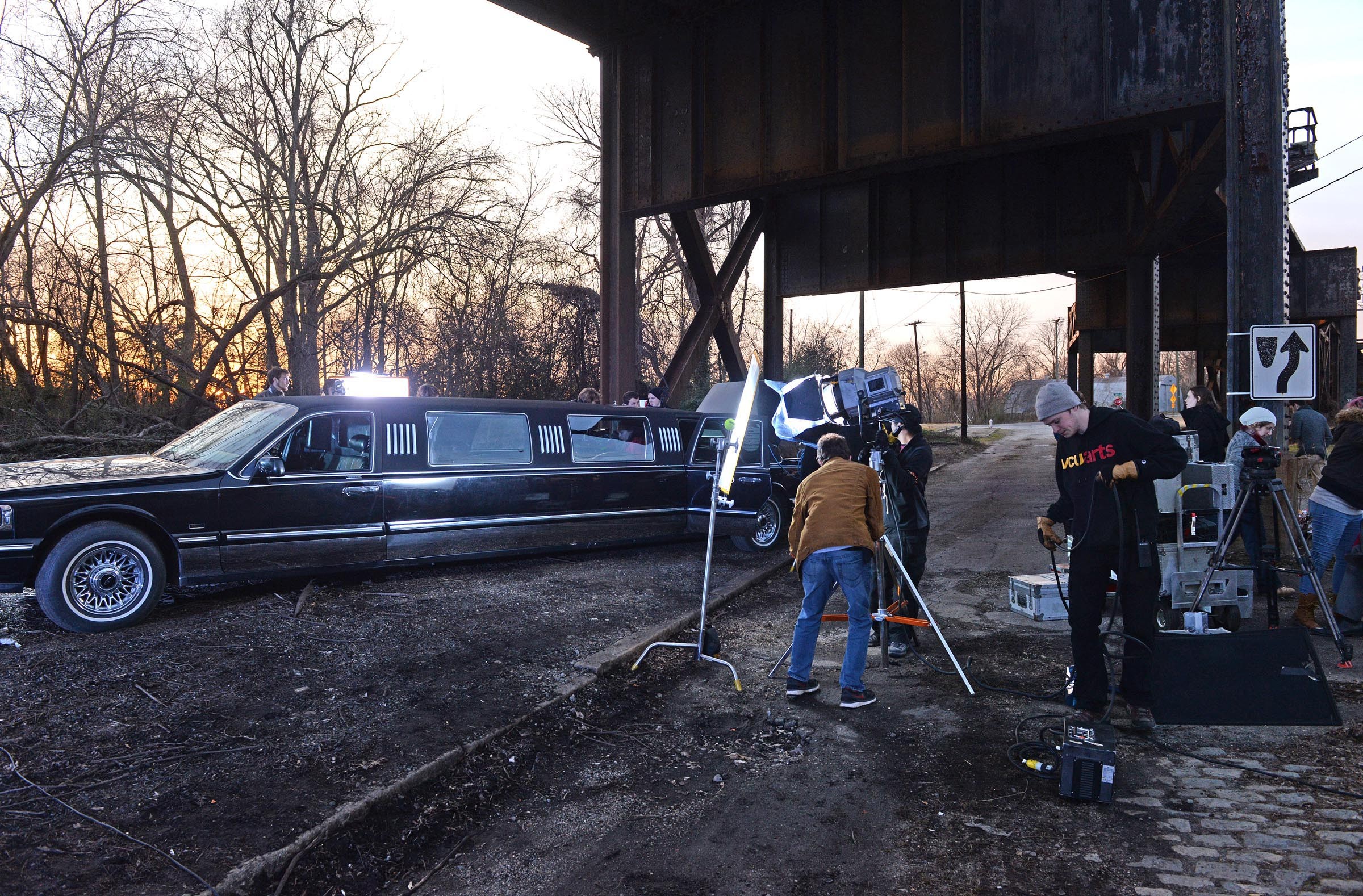 Macfadyen also envisions the vehicle as a symbol of ’70s decadence.

“It’s gone out of style,” he says. “Nowadays they’re party mobiles, but back in the day you’d often see African dictators and Central American dictators driving around in those things, so that kind of spoke to me for the image of Macbeth.”

Even more unusual than its setting may be the film’s crew. It’s made up of VCU students and faculty from the school’s cinema department. They donated their time, shooting the film on Saturdays from November through February.

A multidisciplinary collaboration, “Macbeth” brings in expertise from numerous departments within the school. Theater, fashion design and sculpture faculty and students worked on costuming and props. The VCU Symphony will record the score for the film, which is in postproduction at the university, with Macfadyen overseeing its editing. He plans to debut “Macbeth” on the festival circuit this year with hopes to ink a deal for wider distribution. The Richmond premiere most likely will be held at the Byrd Theatre later this year.

VCUarts Cinema also is offering a class this semester comparing film depictions of “Macbeth” (including movies by Akira Kurosawa, Roman Polanski and Welles) with the VCU production, examining and analyzing directing, screenwriting and production choices.

“As I understand this, this is sort of new territory. If another school or university has ever done this before, we’re not aware of it,” says Joseph Seipel, dean of the VCU School of the Arts. Shooting a professional feature film offers “what we think will really be the experience of their student lives.” 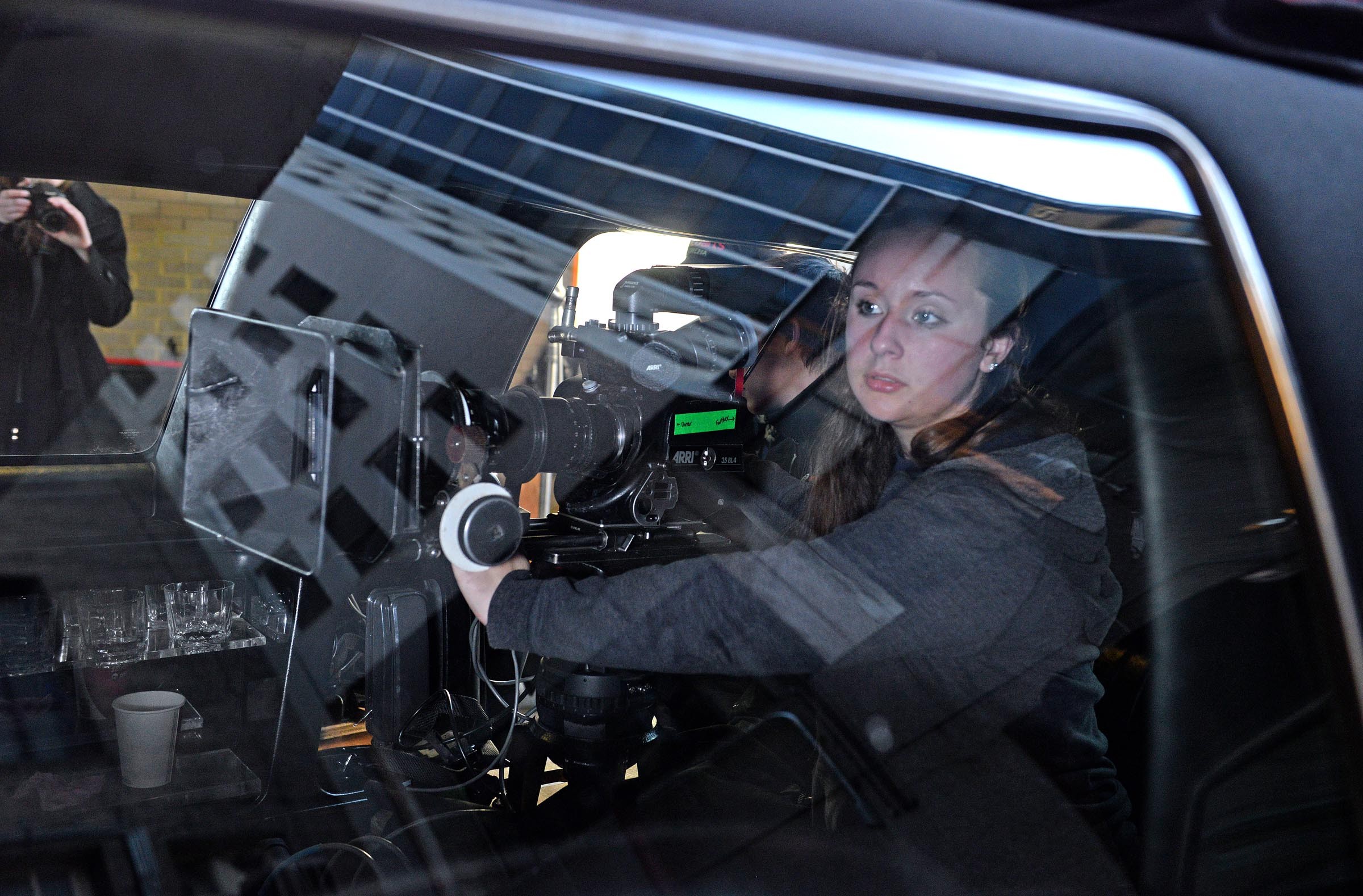 To be able to come to a cinema program your first year and actually work on a feature film, I wish I had that opportunity when I was in film school,” says Rob Tregenza, professor and head of VCUarts Cinema, who serves as the film’s executive producer. “The opportunity that these students have at VCU is incredible.”

Laura Zoellner, 21, a senior in the program, was one of two camera operators on “Macbeth,” which was shot in old-school, cinematic 35 mm.

“We’re getting paid in experience,” says Zoellner, who aspires to a career as a director of photography or cinematographer for films and television. “I’m learning to think more quickly on my feet and learning to deal with what comes to me as it comes.”

“It’s hard for students to drop in a feature film into a very full academic schedule,” Chapman says. “We figured out that this could happen in September. It wasn’t like there were a couple years of planning that we’re going to do a feature within the academic calendar of your course work.”

McFadyen contacted Chapman about the project last spring. He’d heard about VCU cinema through actors working on “Turn,” including Hilary Montgomery, a Theatre VCU graduate who works as a stand-in on “Turn” and plays one of the witches in “Macbeth.” Chapman also had brought in actor Burn Gorman of “Game of Thrones” and “Torchwood” to speak with students during the show’s first season.

During downtime on “Turn,” MacFadyen had been working on several screenplays including the modern retelling of “Macbeth.” Chapman connected him with Tregenza and the rest was history. The school started preproduction in September.

“Everybody said yes but had to figure out how it was going to work,” Chapman says. “Pretty much everybody has called in all the favors that they thought they could … [because] it’s such an opportunity for the students to do this.” 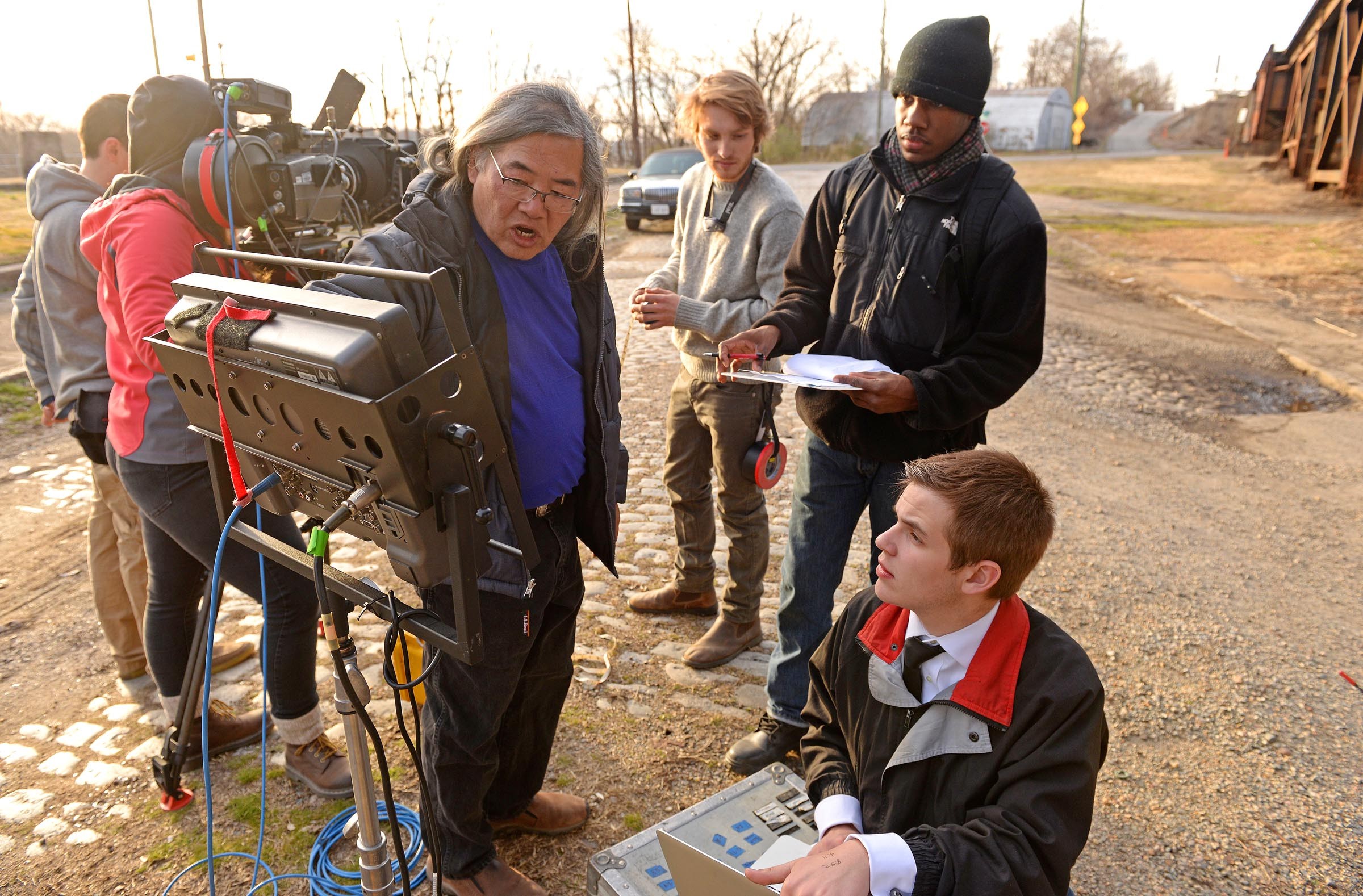 The cinema department is only eight years old, but many of its alums and some current students have been regularly working on productions shot in Richmond and Virginia, including Spielberg’s “Lincoln.”

Andy Edmunds, director of the Virginia Film Office, says VCUarts Cinema is “a vital part of our marketing arsenal” in wooing films and television series to Richmond. And “now that they have this significant credit” with their experience on “Macbeth,” Edmunds says, “it makes them an even more valuable asset for the film industry when we try to market our talent pool to outside clients and producers.”

Despite its status as a public university, VCU is reticent to reveal its investment in the film, declining Style’s request to provide the amount it’s given to the project and citing the need for competitive advantage.

But the film’s overall budget is $600,000, which includes cash investment and in-kind donations of labor and equipment. That was financed largely by the university’s School of the Arts, which has a 50 percent stake in any profits from the film. The Virginia Film Office also donated $30,000 to the production.

Students ran every department, adjunct professor Julian Pozzi says. Their availability helped too, he says, adapting to “changing requests, schedules and shots — many times with only one or two days of lead time.”

One of the producers in charge of “Macbeth,” Pozzi handled everything from haggling for the limo — which included convincing the incredulous seller that the vehicle wasn’t going to be sold on the black market in Saudi Arabia — to playing the chauffeur in the movie. 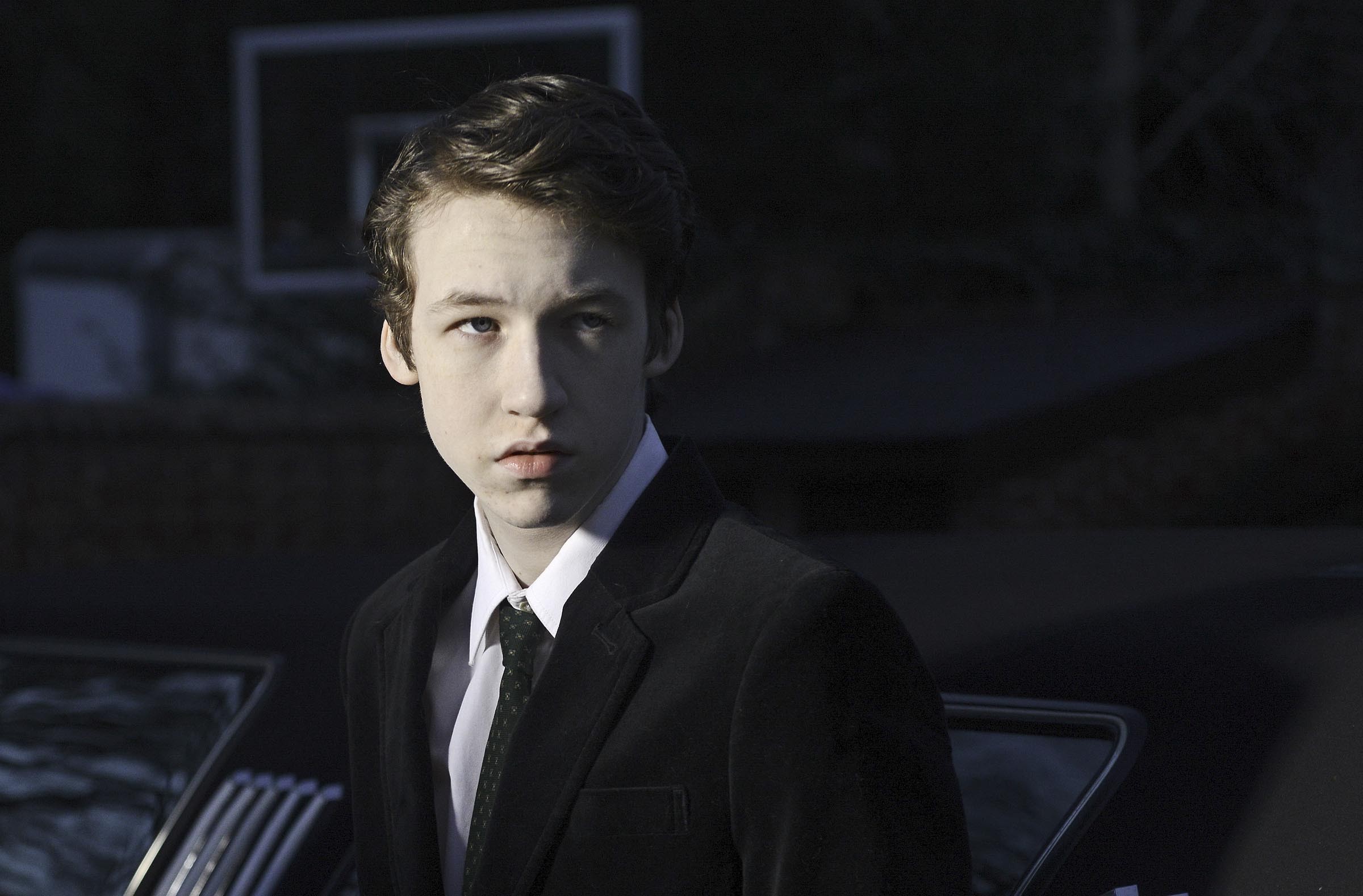 “McNally was great,” Macfadyen says. “We saw Duncan in this version as one of those London banksters who take the money and run when they feel the need to do so. He gave it a real Bob Hoskins spin.”

“This is one of the darker points of the story within ‘Macbeth,’” Druid says of his role. “My character is like the sacrificial lamb. … It sets the tone for who Macbeth is: Everybody knows he’s a psychotic killer but now he’s murdering an innocent child.” He adds, laughing, “There was quite a bit of blood on me.”

But it’s clear to anyone involved that Macfadyen has the most difficult role as both lead actor and a first-time director.

“It’s kind of like Atlas holding the world up on his shoulders. It takes a special person,” says adjunct professor Art Eng, who worked as director of photography on “Macbeth.” A former White House cinematographer, Eng has worked on projects as varied as John Waters movies, “Rocky V” and Super Bowl commercials.

Macfadyen is “a very talented man, a very creative guy,” Eng says. “The quality of acting in it was just amazing. … A lot of current films are based on special effects; this film was based on the acting.”

And the film’s star was emotionally involved too, Eng says. “He’s a hardcore method actor, and to be playing in the role of Macbeth and then have to turn around and direct the next scene, it was quite a challenge.”

Yet, despite more than a few — unavoidable, really — utterances of the dreaded “M” word on set, the production moved forward as smoothly as its shiny, black stretch limo, filming in such wide-ranging Richmond locations as the abandoned Fulton Gas Works and a Cary Street Road mansion. 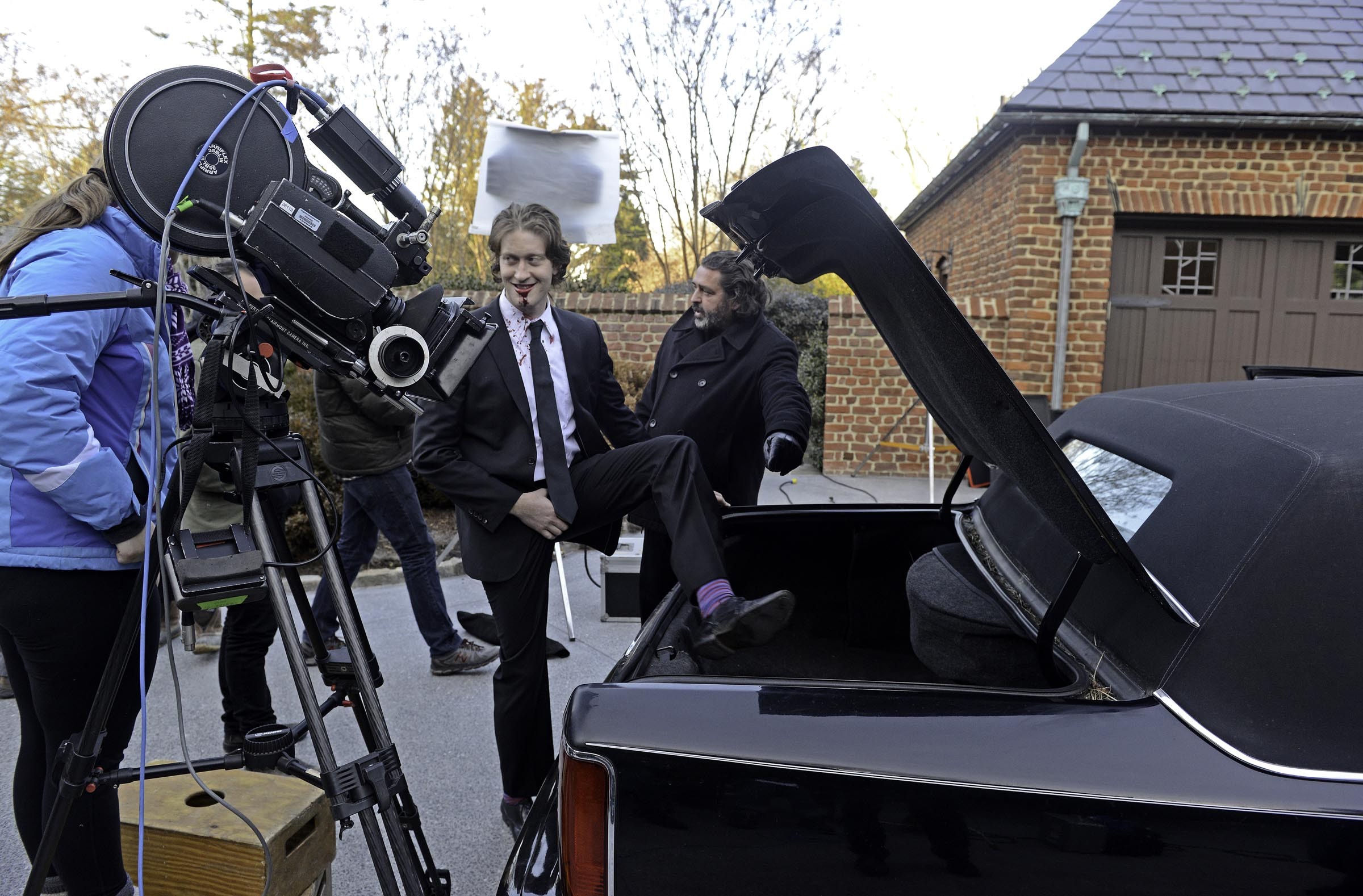 Perhaps the worst accident to afflict the film occurred when some of the ubiquitous fake blood stained Lady Macbeth’s vintage silk dress. Attempts to out the damned spot resulted in white bleach stains, but those were easily hidden on camera.

Macfadyen “definitely had a clear vision, which is really cool,” says Adam Stynchula, 20, a student in his senior year who served as one of two production designers on “Macbeth.”

“Normally we work with student directors on shorts [and] no one ever really has a super clear vision,” he says. “It was awesome to see how much heart Angus put into this project. I would say, [for] him, ‘Turn’ was the side project. He was always all about [‘Macbeth’]. I would get calls from him in the middle of the night and first thing in the morning.”

“Macbeth does murder sleep,” Macfadyen quips during production, quoting the Bard, “and I get about three hours a night.” S 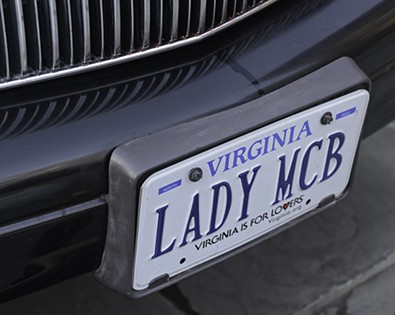 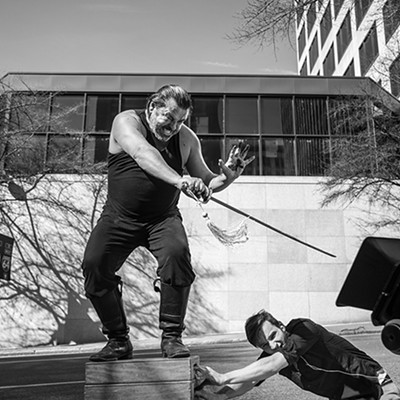 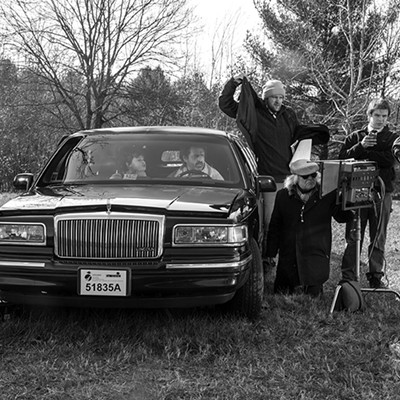 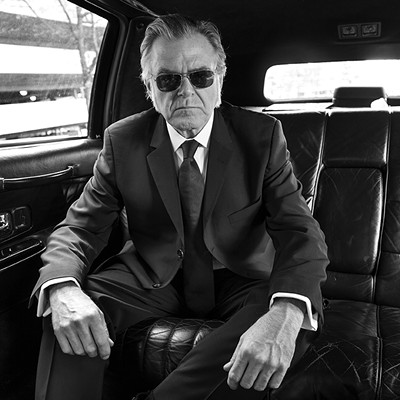 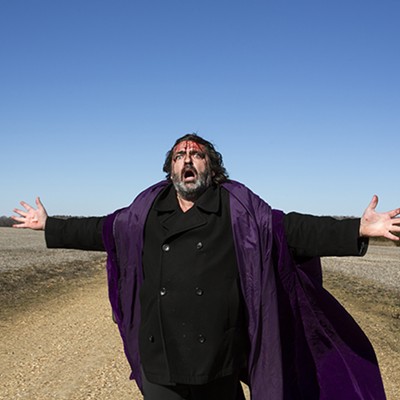 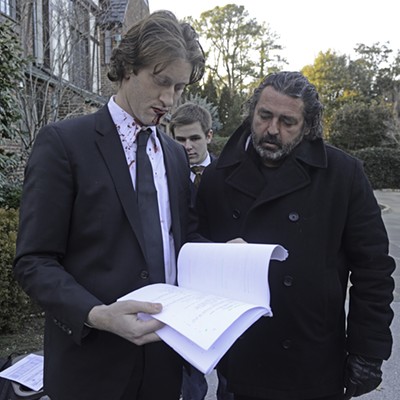 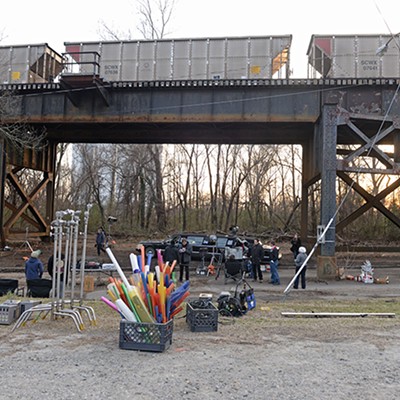 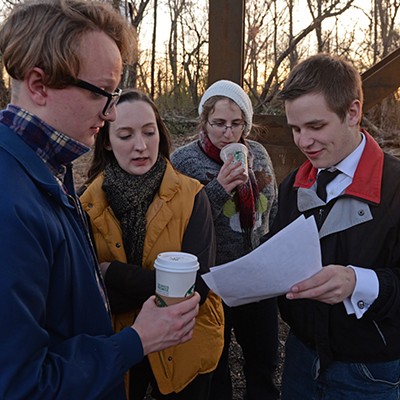 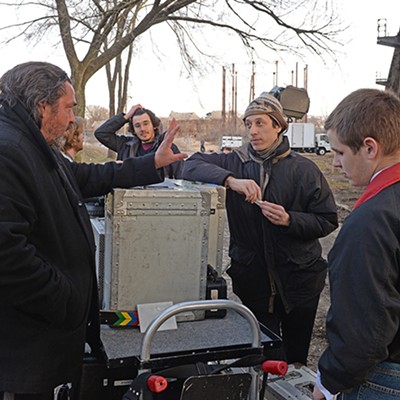 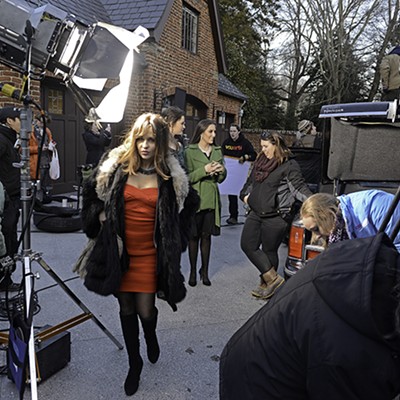