A pub owner says nightclubs in Shockoe Bottom are killing his business. Others see a festering, racially charged culture clash. 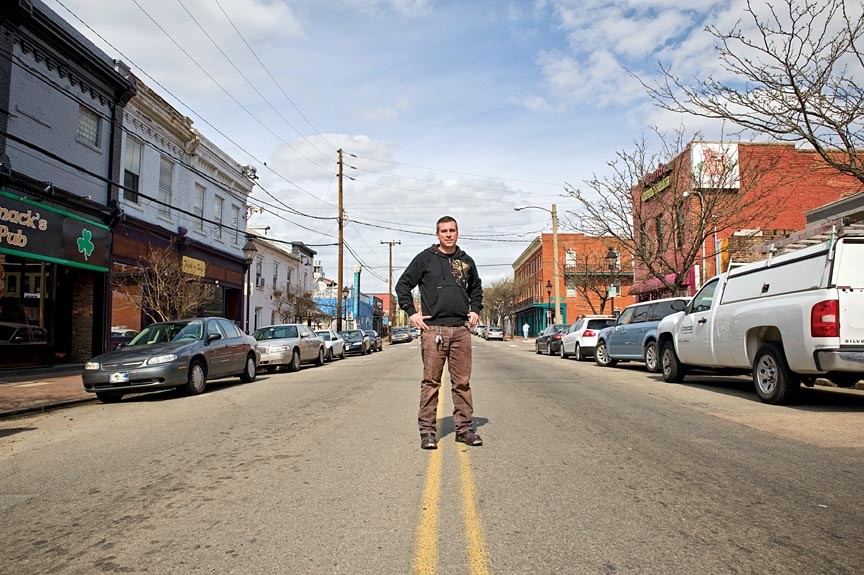 Regulars who he hasn't seen in months will arrive at William "Mac" McCormack's Robinson Street bar, having made the long trek to the Fan.

"They tell me they live in the Bottom, but they don't actually go out in the Bottom anymore," says the owner of McCormack's Whisky Grill and Smokehouse on the thoroughfare for the thirsty. "They don't want to deal with the crowds."

His other nightspot, Shockoe Bottom mainstay McCormack's Irish Pub, is failing for that very reason, he says. Years ago, the pub used to pull in monthly receipts totaling $25,000. In one recent month, the bar barely took in $13,000, leaving McCormack now struggling to pay his monthly bills.

McCormack puts the blame on the changing face of Shockoe Bottom. The young urbanites and loft dwellers who actually live nearby have abandoned his bar for options that don't entail contending with a severe lack of parking, allegedly rowdy crowds and increased police presence.

While the city mulls a long-term plan for the neighborhood's future, debate continues over whether the nightclubs that have opened in recent years, and the crowds that they draw, are good for the Bottom. City officials say the Shockoe Bottom Revitalization Strategy will be released sometime in June. McCormack, meanwhile, says that he and some other local businesses in the area are considering picking up stakes.

He'd much prefer to stay. And McCormack isn't leaving without a fight.

On April 27, McCormack, compact with short-cropped hair, took to Facebook with pointed criticism of how one particular club owner conducts business. His posting announces his opposition to a liquor license application for Aqua, an as-of-yet unopened nightclub. Then he asks others to do the same.

"I don't have a problem with him personally," he says, referring to local nightlife magnate Rodney Peterson. "It's just that the large clubs are dinosaurs. They aren't a good fit for the Bottom. And I don't want him managing another one."

Peterson is part of the ownership group that operates a handful of Shockoe Bottom nightclubs, including the Have a Nice Day Cafe. Since the shooting death of a Petersburg man in a parking lot adjacent the club last spring, the nightclub has become a symbol of the alleged unruliness of the mostly black crowds that fill the Bottom most weekends.

"I think many of us share a negative opinion on [Have a Nice Day]," he writes. "If you don't want to see this happen, if you think the bottom deserves to be better than it is, don't let him open."

State law allows anybody to formally oppose an application for a liquor license. That includes other business owners.

From a booth inside the cavernous Vision, a club in 1700 bock of Main Street, Peterson, a tall and burly man, scoffs at the idea that his clubs and patrons are to blame for what ails Richmond's oldest neighborhood. He says that in the two years since taking over Have a Nice Day Cafe, his staff has made strides to increase the security both in and outside the club.

David Napier, president of the Shockoe Bottom Neighborhood Association, agrees. "They really have done some things that have led to less problems," he says.

Located on a strip of Main Street book-ended by Café Gutenberg and Mingles, Peterson says Aqua is intended to be a playground for the "grown and sexy," nightclub parlance for an older, more sophisticated demographic.

These are facts that Peterson says McCormack should have been considered before he went public. "We were the ones who got the thug element off Main Street," he says. "So how are you going to turn around and blame me because your business isn't doing well?"

The debate over the Bottom's future, and whether the neighborhood needs another club, has an unmistakable racial tinge. The nightclubs that have opened in the last few years along Main Street cater to mostly black clubgoers.

"Everybody has an issue because all they see is black people," says Peterson, who is black. "If they were all white like they are in Shockoe Slip, would he still have a problem with it?"

It's a charge that McCormack vehemently denies. His opposition isn't about race, McCormack says. It's about attitude. "Too much of the same type of club creates an un-diversity," he says. "Right now, there's just one type of crowd coming, and my problem is their attitude to other people and businesses in the Bottom."

What the dispute may boil down to, ultimately, is the competing needs of the bars and restaurants that depend on a dearth of parking and walk-up traffic to survive and nightclubs that need to attract hundreds to survive.

But can the two businesses models exist?

Jenn Mindell, one of the owners of Café Gutenberg, says they can. "Polarizing our businesses, instead of embracing the strength of our variety, will only keep visitors from enjoying the great things we have to offer," she writes in an email.

But balancing the needs of the two is tough, Napier says. "We don't want to be prudish, but people live down here that need to be able to park and live in peace," he says. "We want it to be safe as well as fun."

McCormack, for his part, thinks he has the solution. For the last few months, he's been floating a proposal that he says will help alleviate parking woes and place soft caps on occupancy. And he says he'll drop the objection if Peterson agrees to keep the occupancy less than 100 people.

A spokesman for the Virginia Department of Alcoholic Beverage Control says that Aqua's application for a liquor license is pending. As for McCormack's objection, no hearings have been scheduled.

Meanwhile, Peterson is currently consulting with lawyers on how to respond to McCormack's note, if at all.

"I'm not worried," Peterson says. "Everything I do down here is to benefit the Bottom." S