Is the housing authority's security patrol breaking the law? 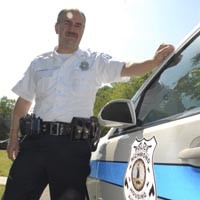 Ratliff cruised by so he wouldn't alarm the suspects, set up surveillance and called Richmond Police for backup. Together, Ratliff and city police officers successfully apprehended the men and seized the gun used in the Church Hill shooting.

One of the Richmond police officers was so impressed with Ratliff's performance that he nominated him for an excellence in policing award.

Ratliff eventually accepted the award, but not before setting the officer straight on his official status. "We're special conservators of the police — we're not police officers," Ratliff told the officer who nominated him.

Ratliff was a member of the housing authority's public safety unit. The authority owns thousands of properties across the city, including Richmond's public housing projects, such as Gilpin and Fairfield courts. Its primary mission is to police and protect residents of the properties. It also works closely with the Richmond Police Department.

Ratliff says the incident that got him the nomination "showed the better angels" of the working relationship with the housing authority and city police, but he resigned from the security force in March. He says he left because the housing authority refused to address his concerns that the security force was pushing the boundaries of its policing powers and jurisdiction too far.

One of the complaints Ratliff listed in his letter of resignation was that their use of flashing blue lights, which state law reserves only for police, was illegal.

In a letter responding to Ratliff, which Style obtained, Antoinette Light, a senior human resources official for the housing authority, told Ratliff that his concerns were "unfounded."

Last week, however, the state's Department of Criminal Justice Services completed an investigation into the matter and, after consulting with the state attorney general, sent a letter to housing authority officials dated June 19 informing them that the blue lights were illegal. When asked by Style about the ruling a few days later, Valena Dixon, a spokeswoman for the housing authority, said she hadn't seen it.

The relationship between RRHA security officers and city police is growing at a time when Richmond's police department is understaffed, its officers are under scrutiny for recent police shootings and violent crime, and murder is on the rise.

Ratliff's resignation raises new questions about that relationship and the policing powers of the authority's public safety unit.

RRHA officers, who patrol some of the toughest neighborhoods in the city, are legally required to undergo only a fraction of the training that city officers must complete.

The line between the RRHA and city police is often blurred. Officers from the housing authority use the same radio network as the city police; their cars have city police identification numbers; they have access to the city police department's criminal records database; and at night they park some of their patrol cars in a city police lot. Hal Hazelton, the authority's public safety unit chief, frequently attends weekly meetings in which city police officers update each other on statistics and policing strategies in their precincts.

Unlike Richmond police, the officers in the housing unit carry the legal designation "special conservator of the peace," a position originally created by the General Assembly in 2004. Prior to that, courts often granted arrest powers to "special police," typically security officers who could be hired at a cheaper rate than actual off-duty police officers.

There were "no requirements on training" special police, says state Sen. Ken Stolle, a Virginia Beach Republican heavily involved with shaping the state's criminal justice policies. And in some areas the courts "were giving them very broad authority to carry guns." In some instances jurisdictions augmented their regular police forces with the "special officers."

Stolle, a former police officer, was particularly concerned with untrained, armed special police being hired by school systems to patrol the hallways. The "special conservator" status he sought and received in 2004 outlined training requirements and restricted the scope of the special police.

Now most special conservators work for private industry, gated communities or theme parks such as Paramount's Kings Dominion, says Lisa McGee, the regulatory programs manager with the Department of Criminal Justice Services. According to requirements set by that agency, special conservators need only 40 hours of training to become certified, compared with the 480 hours of training offered in a police academy. They also receive fewer legal protections than city police officers.

"People even to this day say, OK, they're a bunch of glorified security guards," the RRHA's Hazelton says. "We're so far from that it's funny."

Hazelton says he hires certified officers who have been through police academies for previous jobs. He requires his men to go through a 40-hour refresher course and meet their range qualifications annually. His unit is unique, Hazelton acknowledges, and says ideally he'd like to see their legal designation change, primarily so RRHA will be eligible to apply for more law-enforcement grants.

"It's a misclassification; it's being addressed," Hazelton says. "It's just housekeeping." He says that the authority has tried to get the General Assembly to move his security officers to the list of regular conservators. (Virginia judges, commonwealth's attorneys and agents from federal agencies are all conservators of the peace.)

"We're classified as … special conservators of the peace," he says. "But we have the same powers and authorities as any city of Richmond police officer and same jurisdiction when we need it."

Critics of the unit say Hazelton is missing the point. While Hazelton may personally hire only former police officers, it isn't required legally. The security officers also forgo the same legal protections as sworn officers.

Once asecurity officers have cleared the training requirements set forth by the Department of Criminal Justice Services, they are individually granted a court order granting them their arrest powers. The RRHA orders state that the officers' appointments are "necessary for the security of property and peace and the enforcement of law on RRHA property." They also state that the unit's jurisdiction "shall be limited to the City of Richmond." It grants them "the same power and authority conferred to City of Richmond Police officers."

Those three clauses give rise to about as many interpretations of the limits of the housing authority's police power. "There are clearly contradictory statements in this order," says local defense attorney David Hicks, who served as Richmond's commonwealth's attorney for 12 years before retiring last year.

Critics contend that the unit is essentially a bootleg police force created by court order instead of legislative statute. Regardless of the officers' previous qualifications, they may be operating beyond their legal bounds as special conservators.

"In the last six months especially, I've heard lots of horror stories from different people in my office, and this has become quite a problem," says Susan Hansen, public defender for the city of Richmond.

"It concerns me in that we've got a police department that was created by a judge," Hicks says. "I don't think we'd be coming up with these ideas to expand the police power of the security at Stony Point Mall."

"Fairfield, Hillside — any property in the city that you see with that RRHA sign that you see, they have authority there," Alston says. "If they're at Third and Broad, they really don't have police authority. They don't have that full authority citywide."

Hazelton disagrees. He says the authority's security unit deserves broad jurisdiction so that if security officers are chasing a suspect, they have the ability to pursue the suspect beyond housing authority property lines. Alston considers pursuits that start on RRHA property and move off a "gray area."

Furthermore, Hazelton says, if their officers were on the way from Gilpin Court to Fairfield and saw someone getting mugged on the corner, his men would certainly stop the mugger and be within their legal rights to do so.

"Again, it goes back to the stepped-up certification and training," Hazelton says. "This is not their first time wearing a badge and a gun."

Since July of last year, there have been at least nine incidents in which the authority's security officers issued traffic citations outside the RRHA's property lines, as detailed in court documents obtained by Style.

Were the arrests illegal? That's a question Ratliff hopes defense attorneys will begin to raise. In his view the traffic citations are false arrests and the beginning of potentially bigger problems.

"Suppose the director of the state Library of Virginia decides that, well, I need to appoint a couple of conservators of the peace to collect fines on past due books," Ratliff says. "I mean, would they be empowered to write traffic tickets?"

Ratliff's view of the law was shaped by older officers when he was in the Petersburg Police Department. Some had been prisoners of war during World War II and drilled into him the idea that the law applies to everyone equally.

"In a law-enforcement position, you're there to apprehend the bad, to protect the good," Ratliff says. "But at the same time, you have to protect the bad as far as their rights under the Constitution and legal statutes."

The traffic arrests were the last straw for Ratliff. He says he was already frustrated that the force had no procedural manual with official policies or standard definitions for such things as how to handle evidence or the appropriate use of force.

In addition, RRHA officers provide their own firearms and ammunition, Ratliff says, but there wasn't a registry of who was using what. He submitted an operations manual he'd borrowed from a regulatory agency to RRHA officials and modified it for RRHA to standardize those things. He says it had not been acted on by the time he left.

Hazelton and RRHA spokeswoman Dixon say that a standardized procedure manual and ammunition registry have always been in place.

Such confusion between security officers and the RRHA worries defense attorney Hicks the most. "No one can tell them what level of civic protection they have," he says. "They may be putting their houses and children's education on the line every time they go."

For example, it's a felony to assault a police officer, but the same crime against a special conservator is only a misdemeanor.

"As far as I'm concerned, one of these officers does something on private property, and they're just like any other citizen," Hicks says.

Hazelton maintains that his men would be protected from civil liability just like police officers. Hence, the murkiness continues.

"If a housing project is going to have their own police, there should be no gray area at all," Hicks says. S