For some spurned by the NFL, arena football is their last chance. For others, it may be their only chance.

From the fluorescent-light-baked locker room to the darkened hallway, past the security guards, the forklift and the wooden pallets stacked in the basement tunnel, the men in shoulder pads and shiny silver helmets make their way to the mouth of the arena.

All 21 players are walking, but the walk itself is solitary. They stare straight forward, speaking in mechanical bursts of braggadocio. In this distended state you realize how little time has actually passed. It's just before 7 p.m., but it seems like they've been here for hours: meeting with trainers and coaches, moving back and forth between warming up on the field and taping and wrapping in the locker room. A masseur in the hallway, with a padded table and a signup sheet taped to the doorway, still works on a player even while the team is introduced. The Coliseum has a way of distorting time and space. The dark, mushroom-like arena always feels like a gigantic basement, its brown concrete columns swallowing any natural light that dares to creep in.

Outside, thunderous rainstorms have darkened the sky, drenching ticket holders as they enter. The city's streets are barren. The recent basketball madness, which stretched into the first week of April with Virginia Commonwealth University's Final Four appearance, still hangs over the city, murmuring in the distance. The baseball season, and all that's become the Richmond Flying Squirrels, is barely a week old. 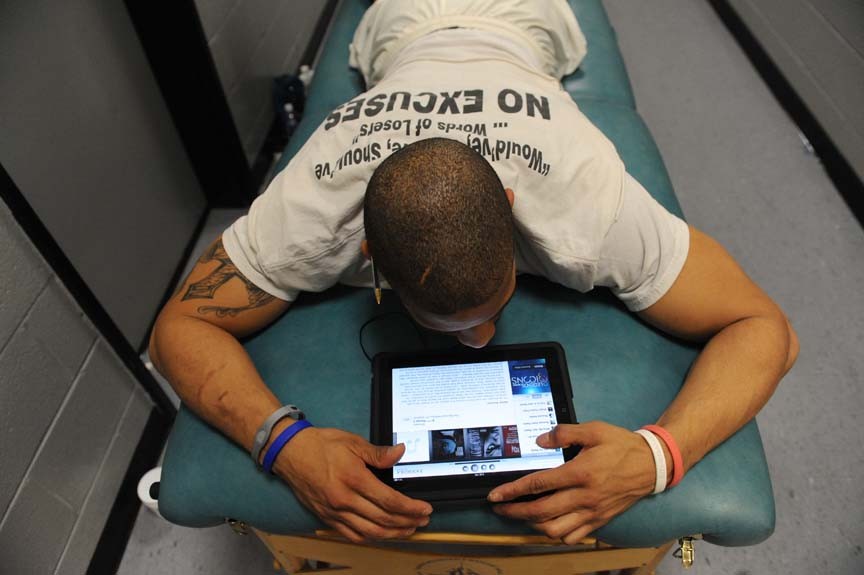 In such a marginal existence, it's easy to lose focus on the task at hand. Richmond Raiders Coach James Fuller seems to grasp this during his pre-game speech. Fuller, about 6 feet tall with a shaved head and intense, penetrating eyes, gestures to close the locker-room door and launches into passages from "The Art of War." The Raiders are good, scary good at times, but this night they face a team that's no slouch. Both the Raiders and the Fayetteville Force are 3-1, tied for first in their division.

"We going to make this a war. We punch them in the mouth early and we make 'em quit. If they do not quit then we know it's a dogfight, and that's the kind of fight we need to be in every once in awhile, all right?" Fuller tells them. "This is all that matters today, being No. 1 in our division. Put it in your head right now. Give me 20 seconds, drop your head, close your eyes, think good thoughts. Prepare your mind to win."

The players bow their heads.

"Everybody touch hands," Fuller says, just above a whisper. "This is all we got, fellas. The people you touching right now, this is all we got. We are going into battle with this right here. And I expect to win."

They kneel and begin to recite the Lord's Prayer. It's spiritual sanitizer; a few minutes earlier they were joking, cursing, preparing to be sublimely violent. Afterward the chatter starts up again, and the team filters into the hallway. "We're walking, let's go," the coach says over the din. 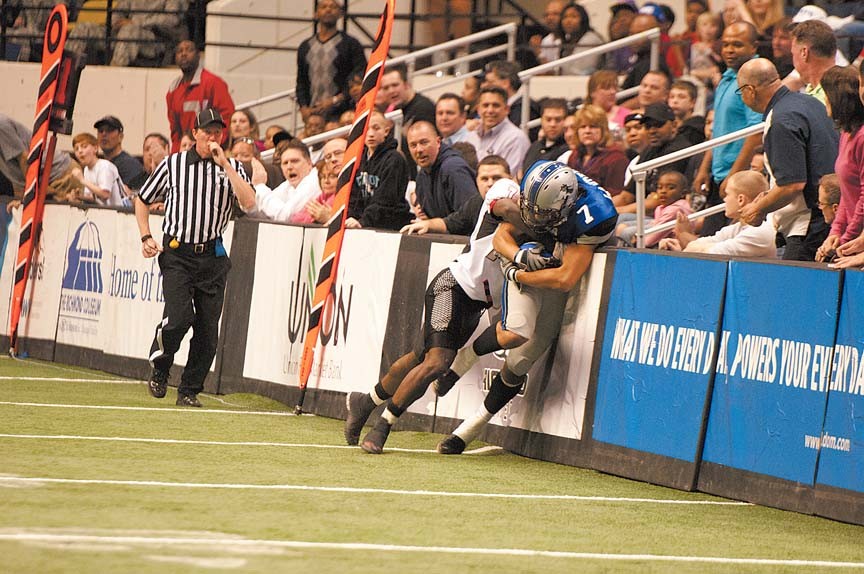 Dwayne Delaney is 6-foot-3 and 320 pounds, but somehow he doesn't seem at all imposing on the dusty sideline of a parking-lot-turned-football field on Overbrook Road. The day starts out overcast, in the low 50s, but by midafternoon a hazy sun breaks through while the Raiders lead a youth football camp at the Sports Center of Richmond on the city's North Side. An old warehouse turned soccer and workout complex, the building is adjacent to two small turf fields. During spring break on a Thursday afternoon, the inner-city youth football players, sans helmets and pads, dart around the field playing the most important touch-football games of their lives.

Delaney, 25, appears slightly pained. He has a warm presence, albeit reserved, and when the conversation turns to his personal exploits, he smiles, wide and round, like a child. He played college football at Morgan State University, becoming an all-conference player in 2007 and 2008 as an offensive lineman. As the sun beats through the pollen and dust, he squints slightly.

The weather's probably not unlike that mid-March afternoon in 2003, when a bomb scare at his high school in Amelia County forced students and faculty outside. Delaney recalls the police car racing down the street — but the blue lights flashed past the school. He had no idea the sirens were for his father.

"I come from a two-parent home," Delaney says, "but my dad, he was off and on. I was thankful for him to be there."

Delaney's father, Herbert Trueheart, was a good football player in high school and was offered a college scholarship, but he turned it down. His son had just been born. "He chose not to go because he had me," Delaney says.

In the seventh grade, Delaney started playing football to get his father's attention. The game came naturally. Always big and strong, Delaney earned the nickname "Rhino" because his teammates joked he could run through anybody — or just about anything. Football became an emotional outlet, a place to expend pent-up emotions. He recalls the argument with his father like it was yesterday. "He got into soliciting drugs," Delaney says, so he struggled with the idea of his on-and-off father telling him how to live his life. At one point, at 17, he fired back: "I'm more man than you are."

Delaney left his father's house in Jetersville and moved back in with his mother. A week or two later, he called his father and apologized. They talked, worked out some issues. The coaches at Amelia wanted to move him from offensive tackle to center. Delaney didn't want to change positions. His father agreed and told him he could transfer to Nottoway County.

"I ended up staying at Amelia," Delaney says. A couple of days later, on March 17, he saw the police car flying down the road while standing outside the school during the bomb threat. He got a phone call later that day: "Your dad is dead." He'd been shot to death, lost in the crosshairs of drugs and crime.

Delaney, 25, still plays the game his father loved. While unsure of what the future holds, he hopes to eventually get a chance to move into the upper echelon of indoor football — the Arena Football League, which is affiliated with the National Football League — or the United States Football League, or perhaps the widely respected Canadian Football League. He has a 2-year-old son, Ayden.

"I just want the opportunity," Delaney says, acknowledging that he still struggles with the loss of his father, whose image is tattooed on his right arm. "I'm 25 years old," he says. "Who can I talk to when I have a problem? My son knows my dad only by what I got on my arm."

Delaney's life has been defined by football, but there's something daunting about a future without it. During the football camp for the inner-city kids who play in the Police Athletic League youth football program, he sees it in their eyes. It's a way out, a safe haven from drugs and street life. But it isn't a cure-all. Delaney knows.

"Everything looks good on the outside," he says, in a moment of reflection. "But on the inside, I still need some work."