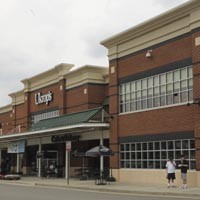 Not long ago, the salad bar wasn't the only buffet line that local politico Terone Green enjoyed bellying up to at his local Ukrop's.

“It was the place to go — on one particular day shopping, I ran into three different state officials, and there were community leaders and county folks,” Green says, including State Supreme Court Justice Leroy Hassell and former Sen. George Allen's longtime chief of staff, Jay Timmons. “You were always bumping into somebody.”

About two years ago, however, Green noticed a shift: fewer bump-ins with high-powered Richmonders at the Short Pump Ukrop's Super Market where he shops.

Call it a harbinger of things to come. Last week, grocery trade publication Food World reported that the Ukrop family had put the venerable chain on the market. A statement from Bobby Ukrop, the company's president, sent on Friday to employees failed to deny the report.

There's little doubt that the arrival of competitors Kroger and Whole Foods, not to mention the expansion of Wal-Mart into the grocery business, has been eating away at Ukrop's market share for years.

The first signs of the supermarket chain's eventual decline can be traced to the summer of 1999, when local grocery supplier Richfood Holdings sold out to Minneapolis-based Supervalu Inc. Jim Ukrop served on Richfood's board, and often flexed his muscle. He once convinced the distributor to help finance upstart Johnny Johnson's Community Pride inner-city grocery chain.

Not long after Supervalu moved in, so did Kroger, which has its own distribution center. Food Lion, also with its own internal distribution, expanded. Then came Wal-Mart. Outside of a handful of stores in Tidewater and its own Save-A-Lot chain, Supervalu's distribution center in Mechanicsville stands to lose a major client if Ukrop's sells its 28 stores to North Carolina-based Harris Teeter, its most likely suitor, say industry analysts.

A company spokesperson for Supervalu, which employs about 1,050 workers in Mechanicsville, declined to discuss the possible sale, dismissing it as “rumors or market speculation.” Calls to Bobby Ukrop, the current chairman and chief executive, and Jim Ukrop, weren't returned by press time.

News earlier this summer that Ukrop's had lost its market leader position to Food Lion may have been the last straw. Ukrop's had long ago maxed out its market share in Richmond, and has struggled to expand outside the metro area. It's store in Roanoke is a chronic under-performer, and it recently closed one of its two stores in Williamsburg.

Hemmed in by a steadfast refusal open on Sundays or sell wine and beer, Ukrop's has been forced to compete in a crowded market with, in effect, one hand tied behind its back.

In the past, the chain always seemed to stay ahead of the competition through innovation. Ukrop's launched its in-store banking operation, First Market Bank, shortly after North Carolina's raid on Virginia banks in the early 1990s. The company also set industry standards with customer value cards and its line of prepared foods.

Of late, however, the innovations have been few and far between. “There might be a lack of enthusiasm,” says one local analyst, who spoke on the condition of anonymity. “It happens to nearly every business owner. When you get tired and you approach retirement age, it's prime time to sell your business.”