Increasingly, activity that was once was part of normal political participation has become criminalized.

by Adria Scharf and Thad Williamson 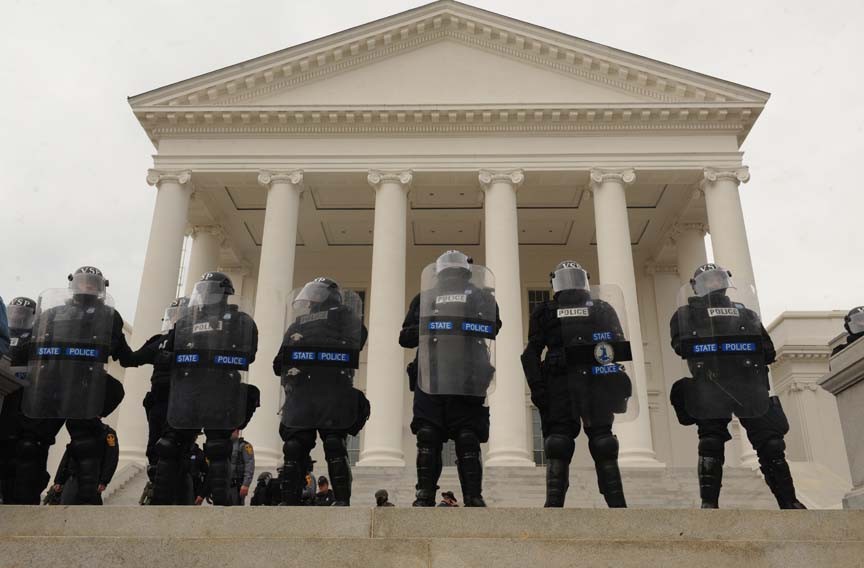 Let's go back to basics.

The most fundamental building block of a democratic society isn't the right to vote. There's voting in Vladimir Putin's Russia, just as there was in the old Soviet Union and Saddam Hussein's Iraq.

Rather, the essential corequisite of voting rights is free expression of ideas and a cultural climate that encourages such free expression. Without it, holders of power cannot be challenged and the possibility of a society governed by the open exchange of ideas among civic equals vanishes. Our rights to peaceably assemble and petition the government firmly are encoded in the Bill of Rights.

A democratic society is one in which the people exercise self-rule by constantly talking, reasoning and arguing with one another — sometimes in a tone of quiet deliberation, sometimes in speech gripped by passion and emotion, and sometimes, as in recent protests, by employing mass silence to illustrate the depth of one's convictions.

"Give me liberty or give me death" was no bland pronouncement. It was a statement by a political actor willing to put his life on the line for his political convictions.

Many women — and men — in Virginia feel existentially threatened by the wave of social legislation passed by the sitting Virginia legislature. Many people saw proposals for state-mandated vaginal probes as a fundamental intrusion on intimate bodily privacy, one that advanced a particular view on a profoundly personal moral question. So too was the bill that Gov. Bob McDonnell has now signed into law that requires women to have (and if necessary pay for) an abdominal ultrasound, regardless of her or her physician's wishes, and even when the procedure is pointless.

Such concerns prompted the mass peaceful actions at the State Capitol during the past few weeks, and those who risked arrest by sitting on the Capitol steps March 3. Like Patrick Henry, many of them feel that an overreaching government is usurping their fundamental liberties and personal dignity. But it would reflect a fundamental misunderstanding of democracy to believe that such acts of dissent and free speech represent threats to the democratic process or to the commonwealth. Rather, such speech is the essence of democracy. It must be respected.

Instead, the Virginia State Police and Capitol Police responded with an excessive and frightening display of force on Saturday, March 3, with state troopers clad in riot gear, black body suits and face shields, plus a small cadre of officers in green, military-style garb holding tear-gas canisters and what appeared to be heavy weaponry.

Fortunately, if part of the state's intention was to cast this particular group as a security threat, it failed. The display of force was so over-the-top, and the resultant visuals so shocking, that the display seems to have backfired. Even the reliably conservative editorial page of The Richmond Times-Dispatch was taken aback by the scenes; we can do no better than to quote the editors' observation that: "Police officers decked out like combat patrols in Fallujah send a far different, far more threatening message: that they have come not to protect and to serve, but to command and to conquer. Saturday's events in the capital of Virginia stain a state with a reputation as the cradle of democracy."

That editorial also properly makes the link between the heightened show of force at domestic protests and the new toys dispensed to local governments as result of the war on terror in the name of homeland security. The federal government has equipped police across the country to respond to supposed terrorist threats. There's a real danger that those tools will end up being used to suppress basic democratic rights.

On that Saturday, the officers' uniforms, weapons and equipment appeared designed for use in a war. But there they were, right on the Capitol steps, being used to control a nonviolent, multigenerational crowd of concerned people.

This is part of a larger societal creep of curtailments to First Amendment rights of free assembly through free-speech zones, permits, rules and regulations. You didn't used to risk arrest by sitting on steps of State Capitol. During the height of the civil rights and Vietnam War era, protesters were able to spill out over the Capitol grounds. They weren't corralled in the area around the Bell Tower, required to obtain permits for specific time slots. Increasingly, activity that once was part of normal political participation has become criminalized — and now it appears that those rules are backed by a police force in full battle armor.

We certainly understand that the individual police officers who are doing their jobs are not the enemies here. The issue, rather, is the chilling effect of excessive responses to protest on democracy and freedom of peaceful assembly. The right to protest isn't a luxury. It's a foundation of our society and an important driver of our progress. We owe so much to those struggles that have come before and that have moved us closer to our core values of equality and democracy.

As Martin Luther King Jr. noted on the eve of his assassination, "The greatness of America is the right to protest for right." Even greater is the capacity to not only tolerate but also welcome such protests even when they conflict with our conception of what is right.

The display of force on March 3 revealed a Virginia that has strayed far from the democratic aspirations of Patrick Henry, Martin Luther King Jr., and a long line of greats in between. Instead it revealed a Virginia that intimidates people who express their beliefs publicly. That this danger is increasingly recognized, across the political spectrum, presents an opportunity for the party of sanity to regain the upper hand. Ironically, sanity will will only be restored only by the continued willingness of Virginians to put their bodies and convictions on the line in the public square. S

Thad Williamson is an associate professor of leadership studies at the University of Richmond. Adria Scharf is executive director of the Richmond Peace Education Center.