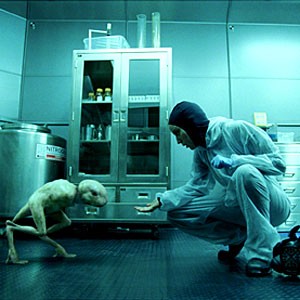 The buzz on “Splice” is that it comes on the heels of real scientific discovery, the revelation that humans successfully have synthesized DNA. In that light it's interesting to find that the science in this sci-fi-horror amalgamation about genetic recombination mostly serves as a prop for a more basic story about humanity.

There's not much real science at all here, and the film barely makes up any of its own. The pretend stuff we do get goes by so fast it barely registers. “Splice” is more a parable about two scientists and the pitiable being they create, set to the paces of a contemporary thriller. Like “Frankenstein” and so many similar movies that have followed, the movie tries to balance its horror with drama about ethics and morality. “Splice” achieves both to varying degrees, though it's not as seamless as its creators might have hoped. The drive for action eventually tears the movie away from its more thoughtful preoccupations.

The movie opens with the birth of Fred, a purring, duffel-bag-sized slug designed as a living generator of some rare, therapeutic cell. When its creators, Clive (Adrien Brody) and Elsa (Sarah Polley) push to take Fred a step further and include human DNA, their overseers put their program on ice, insisting that the public isn't ready for a humanoid tongue, squishing around in a laboratory cage. The film's high point, the grisly and grimly humorous demise of Fred, bears out those concerns all too incisively. But Clive and Elsa — their names an unmistakable ode to James Whale's “Frankenstein” films — are disappointed and determined scientists in a movie, so you can probably guess what they decide to do on their own.

“Splice” follows the lead of its forebears in more ways than its premise, leaning just slightly to the campier side of Hollywood horror movies. It also leans to the fictional side of science fiction. Clive and Elsa appear, talk and behave as if scientists are simply computer geeks in white coats dealing with nucleic acid rather than network servers. Brody has an emo haircut, and the couple decorates their apartment in anime art when not squinting at computer animations of double helixes. The movie is less interested in how they make science than in what they make of it, namely Dren (Delphine Chaneac), a humanoid female that grows into a creature who could have been plucked out of Greek mythology.

Winging it, just like the best scientists no doubt, Clive and Elsa struggle to determine what parts of Dren are beast and what are human, forcing the couple to act more like unprepared parents than seasoned researchers. Directed by Vincenzo Natali, maker of the cult thriller “Cube,” the story is strongest in its middle third, when it neatly balances the anxieties and hopes of its eager but sometimes insensitive duo with the fate of their new ward. The three form a triangle of audience allegiance, each getting a turn to earn our sympathy, wonder and loathing. In this section “Splice” achieves exactly what it intends: to twist the audience into a spring of tense apprehension at what will become of its three protagonists.

In some ways Dren represents all three and more; Clive and Elsa have put so many genes inside her we never know which will dominate, and neither do they. We get the idea Dren doesn't know either, and the climax to which the movie builds is the constant question of what kind of entity, be it person or monster, she'll turn out to be. Natali makes sure every option is explored, to the point that Dren and the film eventually transform from compelling to crazy to downright kooky.

The monster that emerges from “Splice” is at last too over-the-top to take seriously, a situation that gets only worse as the film grasps for ever higher levels of shock value. The culminating chases and spiking music have the feel of the inevitable, but it's a letdown to see the movie's higher aspirations all but disappear. “Splice” becomes no more than a ride. You laugh more but you don't enjoy it as much. Like fictional scientists, sometimes overeager filmmakers need to be checked lest they overdo the ingredients. In the end the movie too much resembles the creation of a mad scientist, turning on us and destroying what it had accomplished. (R) 104 min.