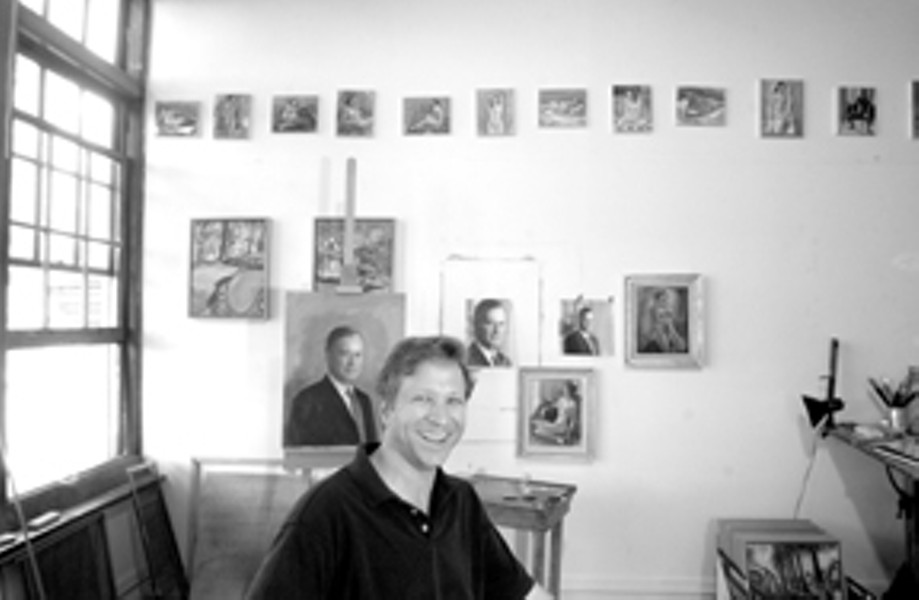 Why he works in the plein-air style of painting: “The translation is open air, working directly from life, capturing those fleeting effects. It doesn’t have to be representational, but that’s the objective.” This summer Bertholet was painting outside every day for eight or more hours. “When you work that much, you get beyond being in practice and you can get a little careless — that’s when interesting things start to happen. Just a little careless — not trying to be a control freak with the paint — allowing it to do what it wants, but still working within the realms of open-air painting.”

How he chooses his subject matter: In order to find the right setting, Bertholet spends a lot of time scouting on foot or by bike. “Sometimes I’ll take a cropping tool with me to frame things up … and just see what I notice and what kind of makes itself available to me. And that can take a lot of time.”

While scouting in Venice, Calif., for his last series which was shown at The Sandbox gallery, Bertholet said he became more attracted to the spaces between things, “the area between two houses … this cool, shadowy area … this resting place.

“Then I started doing portraits of old trucks and cars that had just become such fixtures in the neighborhood that people immediately recognized them. I was attracted to that because the forms of these ’50s vehicles were more fluid, more fun to paint than all these right angles. They had a little personality to them.” Venice was a beatnik refuge that is quickly being gentrified. “Every time a cool little cottage gets leveled to turn into some minimansion, people don’t like it and the neighborhood loses a little more of its character. I guess I captured the feel of Venice somehow in those paintings.”

How he handles the challenge of solitude when painting: Because he spends so much time working alone, Bertholet says he feels a need to connect with other artists. “There are times when you just want to speak that language, to study other artists’ decisions, what they left fuzzy or crisp.” So he goes to a museum. “It’s like being a forensic scientist, guessing what the artist’s thinking was, looking at the marks on the canvas.”

How he maintains productive energy: Bertholet says that staying in practice is what’s most important, that inspirations change all the time. “You have to fool yourself into believing that it’s really important. It’s not like you’re saving lives or anything — painting is kind of self-indulgent.” But it’s the reinforcement from the marketplace that keeps his energy up. “I sometimes put marks on the canvas before I even go painting, or do a ground on it, just so it’s not this intimidating white surface.”

On being bad: “Everyone has bad paintings. You just scrape them down or throw them out. You know after the first hour or two if you should chuck it or continue.” Bertholet says that he thinks some people use the excuse of writer’s or creative block because they fear being bad. “I’ve decided on some of the works that are more successful; I tried to be intentionally bad, to let out whatever was stuck inside me. Just be bad … and it worked.” — Deveron Timberlake