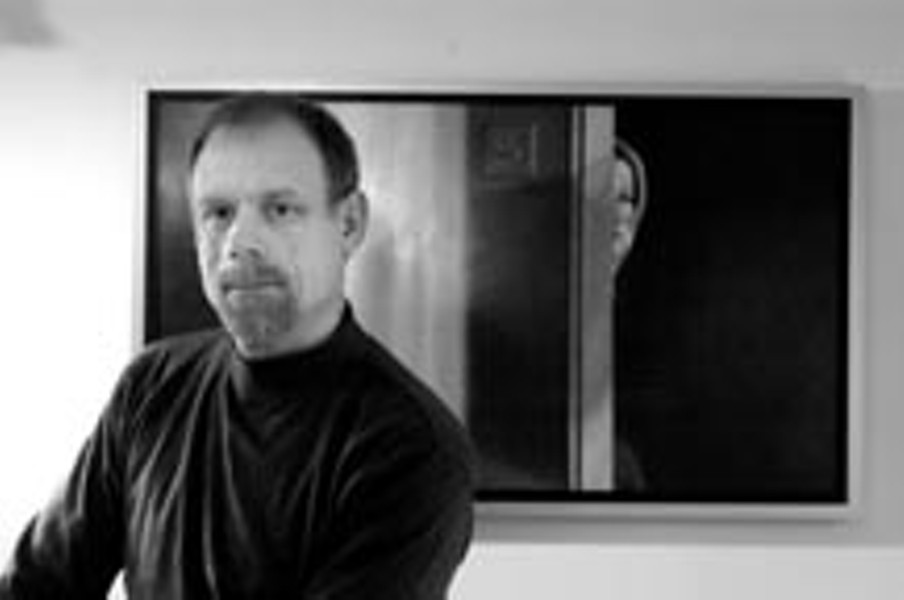 Why the content of television programming interests him: In the series, Tombes titles paintings "The Discovery Channel," "The Inspiration Channel," "Fox News" and other TV-network names that reflect each composition. "When you look at the imagery being broadcast on such a large scale, you start to notice things that are archetypes, figures and images, then you start dealing with these archetypes," Tombes says. "What is television projecting into our minds? Why would you paint an image drawn from television? When you move it to the panel, it changes the way you perceive it. Images you might absorb [unconsciously] become confrontational. A painting transforms the imagery. That to me is exciting and interesting." He shows a football player, a mysterious woman, a beach scene at Corolla, a ghostly woods near the Foundry, and other views of people and nature that he captured first in photographs.

Why he moved from traditional canvas to plastic: Tombes typically works with oil paints on linen or canvas, but for this series he wanted a more high-tech look. "I moved from canvas to ABS plastic panels that are normally used to produce automobile parts," he says, "and I use an automotive-grade sandpaper to get a very smooth surface. That was a moment of transition which brought the paintings into a modern context." He studied the dimensions of flat-panel television screens and created similarly sized frames of brushed aluminum with black insets. A wall of his paintings looks like a bank of television monitors, all tuned to different stations and frozen in time. "The framing is part of the illusion," Tombes says.

How he uses technology to shape his compositions: Tombes says realistic work must be artistically sound. "I bring to bear all of my compositional devices. I still want them to be good paintings. They're a reflection of multimedia, but I have an innate desire to make them excellent, using every bit of knowledge and skill that I can pull together. That means excluding some things, adding others." He uses Photoshop and other computer tools to composite images, edit, enhance colors and modify focus. And he seeks out critiques from other artists, usually via online artist forums, to help solve problems with a painting or evaluate its statement.

Why he considers television a reference tool: "It opens up this enormous range of images," Tombes says. "Television becomes a framing device that puts the information in a context that allows me to experiment visually and at the same time allows the images to stay connected. It's a visual smorgasbord, and for someone who's visually oriented, HD television has so much possibility. I can continue to go deeper."