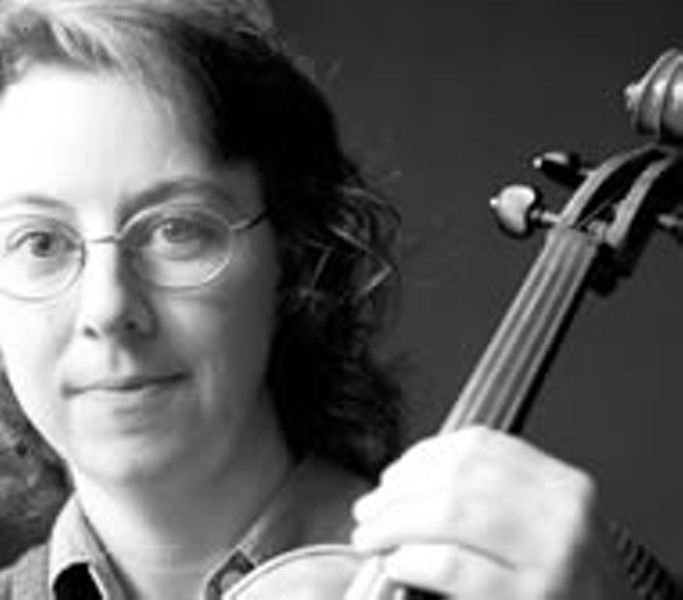 "They were all out of violins, and I was too small to carry a cello," she recalls. So she took up the viola by default.

The viola is a slightly larger cousin of the violin. It is tuned a fifth lower and produces a deep, rich sound. In an orchestra the viola rarely plays the melody and even more rarely gets to solo.

Sharp believes the instrument suits her personality well. "Violists are pretty laid back," she says. " … Most of what I do is never heard [by the audience]; I'm part of this huge thing. I play these inner parts [of the music] — but they have to be there."

How she became a professional musician: Sharp went to The University of the South (Sewanee) to major in biology to become a veterinarian. But she was surprised how much she missed playing the viola.

Growing up, she was immersed in music. Her mother was a pianist and organist, and classical music constantly filled the house. "It just seeps into you," she says. Halfway through her sophomore year at Sewanee, she transferred to Vanderbilt University to major in music. After graduating, she auditioned for conservatory and to her surprise, was accepted. She chose to attend the Cleveland Institute of Music because she liked the school's practical approach to getting an orchestra job. "Not everybody can be a soloist," she says, "especially if you are a violist."

"When I hit about 30, I really started thinking about quality of life vs. career. …I would rather be the principal here than a section player in a larger orchestra. I feel really lucky — I have a great setup here."

What she plays: Since 1995, she has played a viola made by Hiroshi Iizuka, a contemporary viola maker from Philadelphia. The instrument is unusually shaped, with sloping shoulder and a wide, notched bottom. "This is the viola I want to play for the rest of my career," she says.

Her typical schedule: She rehearses with the Symphony six days a week, teaches private lessons in the afternoons and is busy nights and weekends with concerts. "I spend 20 hours a week in concerts and rehearsals, but I spend at least that much time preparing, because you really can't learn the music only during rehearsals," she says.

She also plays with St. Catherine's Oberon String Quartet, which plays two formal concerts a year in addition to six educational concerts for students. The Richmond Symphony Quartet keeps her busy with other gigs. On average, she plays her instrument from three to seven hours per day.

What she listens to: Folk music, Irish fiddle music and singer/songwriters such as Susan Greenbaum. Anything but classical music. "I OD on it at work," she says. "I listen to public radio for the news, but when the music comes on I turn it off."

What she likes best about playing with a symphony: "The sound. You're part of this huge thing. To hear it live is great, but to sit inside it, you hear other things … It's really moving."