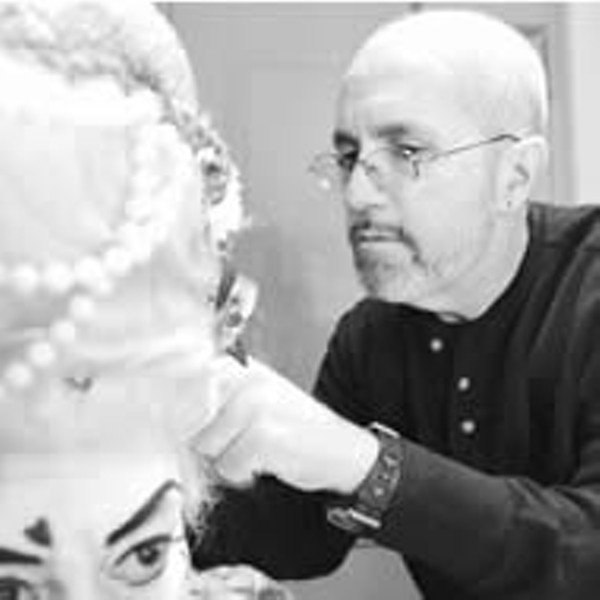 Where you can see his work: In Virginia Opera productions, including "Die Fledermaus," March 28, 30 and April 1 at the Carpenter Center.

How he got interested in makeup and wig-making: As a 9-year-old boy McGough was fascinated with horror movies and monster makeup. In college, as a theater major, he acted and directed, but also maintained his interest in stage makeup. He was first exposed to wig-making in graduate school, and things started coming together during an assistantship, when he did hair and makeup for the University of Illinois' dance and theater productions, including opera. After graduating, he apprenticed at Santa Fe Opera, where he "learned how to make an opera happen." This is his fifth season with Virginia Opera.

His role in the opera: Applying stage makeup, creating and styling the wigs worn by the performers. "I'm the ingredient in this artistic endeavor that I don't want you to see," he says, "The perfect mention in a review is none. I want you to assume that this hair is growing from people's heads."

How he makes a wig: He starts by creating a handmade cap from various kinds of netting, with the finest netting being used at the front of the wig so that it disappears on the wearer's head. He fits the cap on the singer who is to wear it, then gets to work weaving hair into the wig, one strand at a time, starting at the back of the head and working forward, using a small barb the size of a fishhook.

"It is the same principle as latch-hooking or crochet, except it is done with hair," he explains. "To make a handmade wig is a week's worth of work for one person working pretty hard."

Where he gets the hair: Most of McGough's wigs are made from human hair, which comes from either Asia or Europe and sells for $700 to $1,200 per pound. The average wig uses 5 to 6 ounces of hair. He also uses some synthetic hair, especially when he needs long pieces.

How many hairs in a wig: McGough has no clue and says he cannot recall ever seeing an estimate. "It would probably make me very sad," he says. "And make me ask, 'What the heck am I doing with my life?'"

Why there are so many wigs in opera: Virginia Opera's February production of "Andrea Chenier" had 78 wigs in it; "Turandot" used 80. There are fewer wigs in "Die Fledermaus," but they are still an important element of the production.

"Wigs are really important because almost all of the time, operas take place in another century," McGough explains. The singers' natural hair usually cannot be styled into authentic period hairstyles.

Plus, wigs are more time-efficient. "What would take me hours to do on their heads, with a wig they can walk in the door and walk out five minutes later with an elaborate hairdo," he says.

How he designs a wig: McGough begins the design process by reading the opera's libretto to get an understanding of the story and setting. He then meets with the director and costume designer or coordinator to hear their ideas; he talks to the singers and does period research, looking at books, paintings and sometimes historic photographs of early productions of the opera. Only after this extensive research does he begin to create a wig.

What he likes best about his work: "I like working really closely with the performers," he says of the hectic hours he spends backstage doing makeup and styling wigs. "You're right in the heart of it all." — Jessica Ronky Haddad