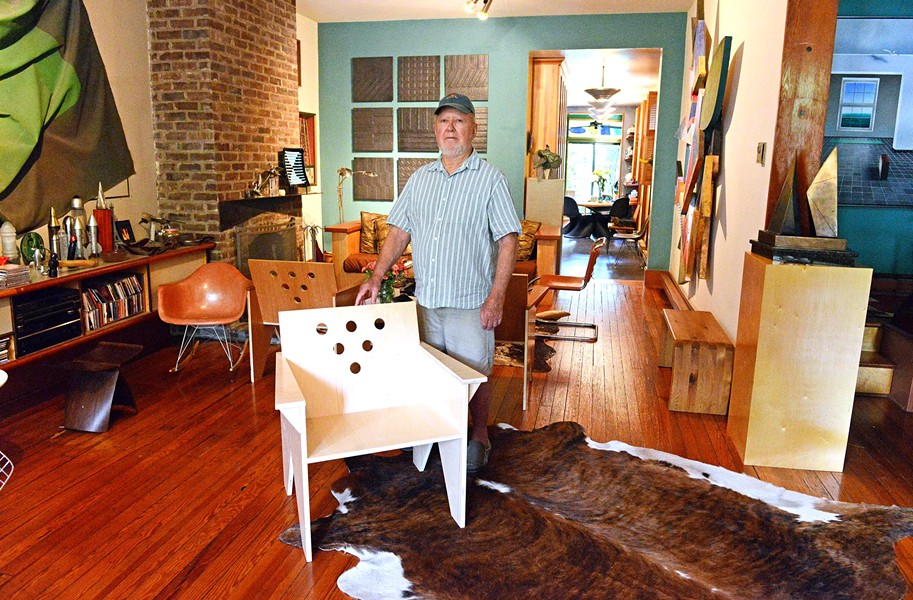 Harvey McWilliams has long been known as a printmaker but he designs furniture, mostly as background pieces for his Fan District house, where he lives amid contemporary artworks, midcentury modern ceramics and dozens of chairs by such masters as Frank Gehry, Harry Bertoria, Mies van der Rohe, and Charles and Ray Eames.

A native of Aurora, North Carolina, McWilliams, 81, moved to Richmond to attend Richmond Professional Institute (the predecessor to Virginia Commonwealth University), where he later received the school’s first master’s degree in printmaking.

He worked in furniture contract sales for Thalhimers, as a draftsman for the Carneal and Johnston architectural firm and taught ceramics at the Virginia Center for the Humanities. For many years he was employed at the Virginia Museum of Fine Arts, where among other assignments he served as curator of the artmobile. This rolling gallery, a very 1960s concept — now considered a conservator’s nightmare — brought handsomely installed exhibitions to the main streets of towns in all parts of the state. McWilliams later owned and operated a popular takeout and catering business, Mainly Pasta, that was located a short walk from his house.

"I wasn’t looking for another chair, I have more chairs than Carter’s has liver pills. I had just finished a round of chemotherapy and couldn’t stand up when I had a creative urge. I started sketching and designed a lounge chair that could be made of plywood: It was similar to a dining chair I had designed a number of years ago. I then made a model of it and sent it to Paul Borzelleca, a talented cabinetmaker as well as a photographer, who lives in Staunton and who’s built a number of furniture pieces that I designed.

"Apparently he had just told his wife, “I am so tired of doing cabinets, I want to do furniture,” the day he opened up the little box I’d sent with the model of the chair. He was able to build two chairs out of one sheet of cherry plywood, and then two more out of maple wood — when we made the thinner dining-room chairs we were able to squeeze three chairs out of a sheet of plywood. Plywood is such an underused material for furniture, but it’s inexpensive, sturdy and simple. This chair is routed out and everything slips together and is held together with glue and a couple of screws in the bottom. You know, Frank Lloyd Wright designed plywood furniture.

"It has a triangle design theme. It’s a symbol that I’ve used for a long time on furniture as well as in my graphic work — it’s religious as well as geometric. The shape is on the supporting legs and is repeated the same size, upside down in circles on the back of the chair to create negative space.

"I love the chair, I love sitting in it. It helps with good posture— your feet go flat on the floor. A physical therapist in Staunton sat in the chair and is recommending it to all her patients. I’ve designed a thin cushion in Italian leather.

"Next, I want Paul to make a painted version of the chair. I have a green color in mind. I need to call him."