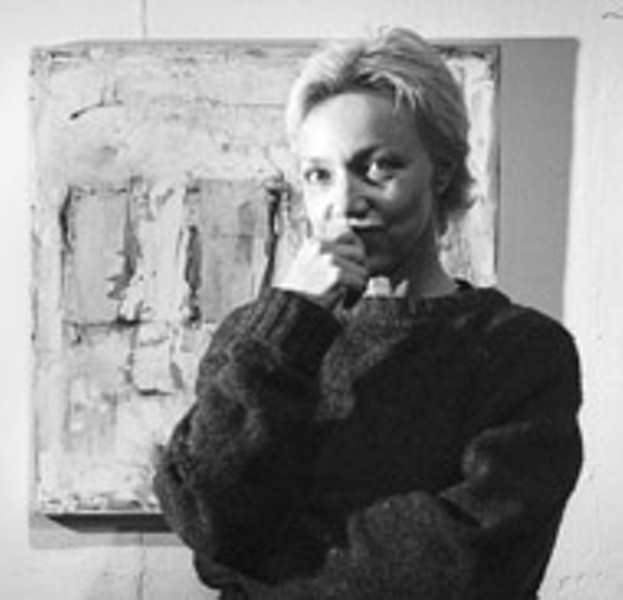 What she does: Foust's medium is the linoleum block print, "The Crayolas of the printmaking world," she jokes. She sketches a drawing directly onto unmounted battleship linoleum and uses traditional linocutting tools (a Speedball) to produce the finished block. She works in a cozy corner of her Westover Hills home, holding the linoleum block in her lap.

She then handprints each work using oil-based black ink, burnishing the paper with the handle of a spoon to transfer the image. Each new print is a revelation. "I don't know 100 percent how it is going to show up," she says.

After printing, Foust then hand-colors some of the prints using oil pastels, which she has only recently discovered after using watercolors for years. Her work is starkly angular and intensely graphic.

How she got into linocuts: Foust did her first linocut when she was in sixth grade and hated it. She entered the College of William and Mary with the intention of becoming a writer, but felt stifled by the campus' conservatism. "I felt like I had to do something dramatically different," she recalls. So she left W&M and enrolled in the Philadelphia College of Art.

It was there that she was reacquainted with linoleum, and this time, something clicked. "I had no problem with having to work backwards," she says. "It was just so exciting to me. I would see things in my head and think, 'I want to try to do it in linoleum!'"

From time to time she has dabbled in painting — what many consider to be "serious" art — but has finally come to terms with the fact that she is a linocut artist. "It took me a while to accept that's what I do," she admits. "I have had lots of people who think I design kitchen floors."

What her work is about: Foust doesn't like to give blanket statements about the content of her work, rather she prefers each viewer interpret the work in his or her own way. This is part of the reason her works are small — she does nothing larger than 12-by-18 inches. "I like little things, where one person looks at a time so that it's intimate, like a book."

Most of her ideas come from her head, but often she is inspired by a person's body language, which is a dominant element in her work. Her pieces, especially the larger ones, set up mysterious, and often uneasy narrative scenes that are completely open to the viewer's interpretation.

"Rarely, if ever, do I have someone looking out at you because that gives you too much information," Foust says. "I like to … make a picture of the thing you see out of the corner of your eye rather than the thing you are looking at."

Why she does art festivals: Foust started doing art festivals about 11 years ago at the urging of an artist friend. "I didn't think my work would sell at festivals," she says. "It's kind of depressing." She did unexpectedly well and has been successful ever since, showing at about 15 festivals a year. Part of her success, she admits, is probably due to the "depressing" nature of her work. It certainly stands out at festivals that are often dominated by perky watercolor paintings. "I never thought that would be a marketing point," she says, laughing. "… I think my work is a little bit more aggressive [than typical art-show fare]. It's hard for me to do something that's happy that's not nauseating. I tend to like dark humor. I think my work is funny in a dark sort of way."