"Source Code" is a programmatic but entertaining thriller. 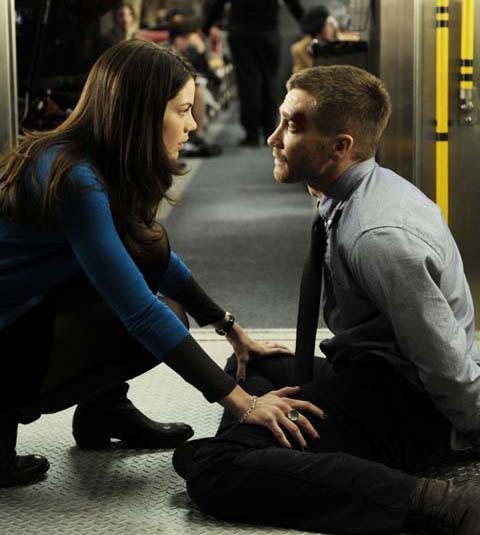 It may come as a small shock to learn that the screenwriter of the new sci-fi thriller "Source Code" really was thinking of "Groundhog Day" when he wrote his high-concept scenario, about an army captain (Jake Gyllenhaal) forced to relive the same eight minutes over and over again.

But only a small shock. "Source Code" is like the Bill Murray film filtered through Ray Bradbury, an existential dilemma that starts off as a curse and ends up a gift for its hero. Beyond its basic inspiration, however, "Source Code" is a very different kind of movie.

An intricate blend of genres and contemporary action tropes, it isn't trying to explore the nature of life or the character of one man as much as deliver solid entertainment, which it thoroughly manages. As a sci-fi thriller "Source Code" is much more about the thrills than science fiction. That's only a problem if you go in wanting something to think about, or if you apply too much thought to what you're given. Be aware that most of the enjoyment comes from not knowing what's going to happen next rather than contemplating what is happening. So here's a spoiler alert: It's best not to read any further if you haven't seen it yet and want to get the most out of it.

Gyllenhaal plays Colter Stevens, who wakes up in the present day on a train headed for Chicago having no idea how he got there. His companion, Christina (Michelle Monaghan), keeps calling him Sean. Colter insists he's not Sean and has no idea what she's talking about, but when he goes to the bathroom he sees Sean (Frederick Degrandpre) in the mirror. He barely has time to be figuratively blown away by this metaphysical bomb when he's literally blown away by a real one. The train explodes, killing everyone on board, or so we think.

Capt. Colter wakes up again, this time as himself, strapped into the confined space of what looks like a damaged military vehicle. A testy woman on a screen in front of him identifies herself as Goodwin (Vera Farmiga) and tries to debrief him. Occasionally she's joined by her superior, a scientist named Rutledge (Jeffrey Wright). They are speaking to him from some kind of command and control center, where they send him back to the train over and over again, always with eight minutes to act before the bomb detonates and he's violently returned the "real" world. Colter is confused and resistant. Goodwin and Rutledge try to keep him focused on his task, finding the bomber, even though they can't explain fully. There's no time, they insist.

It's tempting to take the "no time for explanations" shtick as one contrivance too many (isn't it wasting more time not telling him?). But as mentioned before, it doesn't pay to think too hard about this movie. As the complicated concept comes into focus it may seem ridiculous under the microscope, but if you resist the urge to squint, it eventually becomes fun to sit back and watch Gyllenhaal, a very capable action star, go through the motions of bewilderment and eventual mastery of his situation.

The limitations of the screenplay only become overwhelming during the lead-up to the finale, when the threat is revealed as a bit of homegrown terrorism befitting an episode of "24," and the sci-fi concept turns into the kind of alternative-reality construct often consigned to stoned philosophizing. The movie is so expertly manufactured as an instrument of suspense that it's kind of a letdown to learn that there really isn't much to chew on beyond that suspense. As a maze of audience button pushing, "Source Code" is just short of terrific. As a collection of ideas it always seems to run into a wall.

A telling aspect of "Source Code" is that it is directed by David Bowie's son, Duncan Jones, following his first sci-fi film, "Moon." Despite assertions by screenwriter Ben Ripley to the contrary, there's nothing in "Source Code" that showcases a particular directorial vision or even a style. It could have been directed by anyone. One suspects there wasn't room for such things, so devoted is the script to the notion of certifiable filmmaking formulas that must be followed for maximum impact. "Source Code" is as programmatic as a good movie can be. Too bad it doesn't have enough of life's unpredictability to be great. (PG-13) 94 min. S