Hanover Tavern’s “Always … Patsy Cline” explores the relationship between the country legend and her biggest fan. 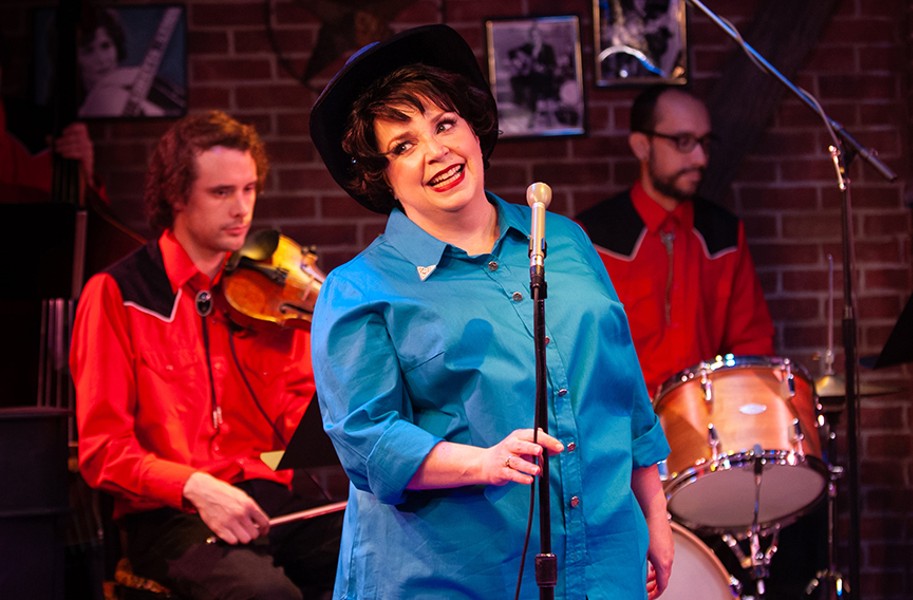 Aaron Sutten Debra Wagoner as Patsy Cline in Virginia Repertory Theatre’s “Always ... Patsy Cline.”
Legendary singer Patsy Cline has always had a vast and loyal fan base, and surely many of those die-hard devotees would love nothing more than to meet and befriend their musical idol. That’s exactly what Louise Seger did, walking up to the singer at a local show and striking up a conversation that developed into a personal relationship. Cline and Seger exchanged letters until Cline’s untimely death in a plane crash in 1963, and their real-life friendship is the inspiration for the musical “Always...Patsy Cline,” currently running at the Hanover Tavern.

The Virginia Repertory production delivers all the memorable Cline standards, including “Crazy,” “Walkin’ After Midnight,” “Back in Baby’s Arms” and “I Fall to Pieces,” but the script works a little too hard to tie songs into the narrative. The show lands somewhere between a musical revue and a jukebox musical in its structure. There really isn’t much of a plot here, but there is a lot of great talent and great fun.

Joe Pabst’s direction emphasizes the humorous moments while allowing space for the songs to take center stage. Debra Wagoner as Patsy Cline is a treat. Her voice is perfectly suited to these songs, and her delivery shows a great respect for Cline’s voice and her legacy. Terri Moore is an excellent narrator, and she displays her comedic prowess with her portrayal of superfan Louise Seger, the woman who calls the radio station every single day to request her favorite Patsy Cline song. These two actresses also riff off of one another well, and it’s clear they’re both having a great time onstage.

The excellent band, led by musical director Jeff Lindquist, is an integral part of this production and I enjoy the interaction with Patsy and Louise throughout the show. Derek Dumais’ sound design ensures that audiences don’t miss a beat.

Terrie Powers’ set design utilizes multiple levels to create a stage upon the stage, and a rotating set piece that represents multiple interior spaces ranging from Louise’s kitchen to the dive bar in which the two women first meet. Skyler Broughman’s lighting design is subtle and impactful. Marcia Miller Hailey’s costume design is lovely, and I especially enjoy the more elaborate, sparkle-encrusted costumes.

Even audiences who don’t know much about Patsy Cline will find this show enjoyable because the cast and the band are clearly having a great time and that’s infectious. But the true fans will revel in the chance to live vicariously through Louise Seger. It’s a play by, for and about fans, and it’s a celebration of Patsy Cline’s life, musical legacy and lasting appeal.