Cowboy Mouth gets “Fearless” at the Hat Factory 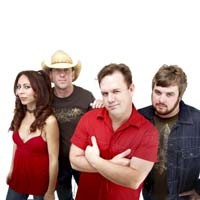 If in some alternate universe Gene Simmons and Paul Stanley had decided to turn their cocksure, hedonistic pop metal into a country-rock jam ensemble, they'd probably have formed Cowboy Mouth instead of the guys who did, Paul Sanchez and Fred LeBlanc. With the atmosphere of hometown New Orleans intrinsically linked to its output, Cowboy Mouth has spent close to two decades writings songs for the straightforward purpose of creating a partylike energy. With its lead singer also being its drummer, a man who once compared himself to being a cross between Jay Gatsby and Animal from “The Muppet Show,” the band is hardly prone to self-seriousness — all for an uninhibited good time. Cowboy Mouth is sure to play a number of tunes off its upcoming album, “Fearless,” to be released later this month, at the Hat Factory on Thursday, Sept. 17, at 8 p.m. $13-$15. 788-4281. - Mike Hilleary