Cowboy Junkies at Groovin' In the Garden 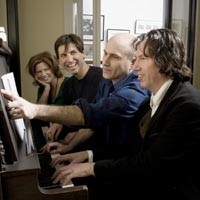 When Canada's Cowboy Junkies settled on their name, they supposedly did so because it was catchy, and more or less because they needed something to call themselves the night of their first show. Intentional or not, the spontaneous title has for more than two decades summed up the narcotic, Velvet Underground cerebralism that fogs the quartet's love for country and blues. With the latest album, “At the End of Paths Taken,” songwriter Michael Timmins' unhurried arrangements and the charcoal vocals of his sister Margo continue to maintain the lumbering monster that is the Cowboy Junkies sound. The band plays Lewis Ginter's Groovin' in the Garden on Thursday, June 18, at 6 p.m. $15-$25. 262-9887. — Mike Hilleary