Richmond is one of four cities participating in StoryCorps’ national initiative, One Small Step. 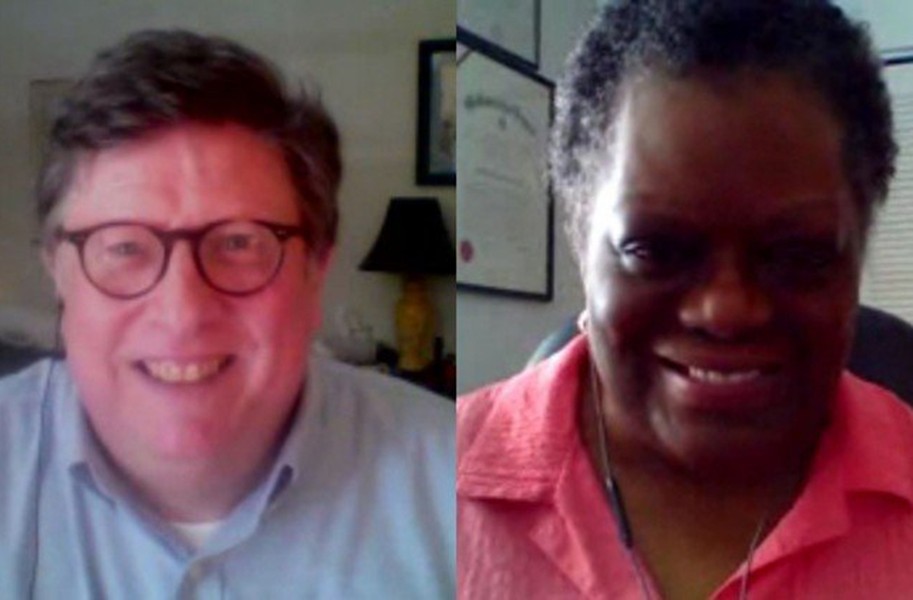 Richmonder Bucky Neal and Charlottesville-based Brenda Brown-Grooms were paired up for a 40-minute conversation because Brown-Grooms’ ancestors were enslaved, and Neal’s ancestors owned enslaved people.

We’ve all heard some version of the comforting platitude: “It’s OK to disagree, just remember that we ultimately have more in common than that which divides us.”

That’s the general idea behind national nonprofit StoryCorps, founded 17 years ago by Dave Isay. The mission of StoryCorps is to record, preserve and share the stories of all Americans. To date, it has curated the largest capsule of recorded voices in the world, capturing the tone and tenor of more than 650,000 people.

The StoryCorps concept is designed around 40-minute conversations with two people who know each other. This could look like a grandmother relaying childhood anecdotes to her grandson, or perhaps two friends delving deep into questions and issues they had never had the courage to discuss before.

Over the past three years, StoryCorps has been researching and developing a new storytelling initiative, One Small Step, a program that will work to “mend the fabric of a country at the breaking point.”

The idea is like the original setup, with one key difference – the two people talking are strangers. And outside of this 40-minute vacuum, they’d probably never converse in real life.

Taken at face value, the idea that sharing stories will heal the country sounds, well, a bit naive. But in reality, the work Isay started nearly two decades ago is far more nuanced and powerful.

“We did lots of research and testing of methodology,” Isay says. “We had over 800 people participate [in the pilot program] and created a new way of doing the interview.”

Isay refers to the 1954 intergroup contact hypothesis as part of the methodology behind One Small Step. Essentially the theory says you can’t hate up close. “It says that under very specific conditions, if people in conflict come face to face, they’ll see each as other humans,” Isay says.

Once the research phase was complete, Isay and his team endeavored to find four cities across the country to serve as the official launch sites for the program. They landed on Richmond; Wichita, Kansas; Birmingham, Alabama; and Shreveport, Louisiana.

“We came to believe that Richmond is a city who knows how courageous listening is done,” Isay says. “We thought Richmond could serve as a model for the rest of the country.”

Isay urges that he has no grand illusions, noting “contempt and fear is a multibillion-dollar industry.” But he’s hoping that with One Small Step, the project can at least “take a hard swing” at reconnecting people no matter their race, religion, sex, political affiliations or age.

While the overarching theme of the program is to connect folks with differing political views, they’ve also connected people based on their varied backgrounds and family histories. Charlottesville-based Brenda Brown-Grooms and Richmonder Bucky Neal were paired up because Brown-Grooms’ ancestors were enslaved, and Neal’s ancestors owned enslaved people.

A couple of months ago the two were connected – virtually, of course – for a 40-minute conversation in which they covered everything from early career aspirations to how discussions of race have evolved over the past few decades.

Brown-Grooms says she saw an advertisement for One Small Step on PBS and was familiar with StoryCorps after doing a 2017 interview with it.

“I’m a professional storyteller and to be part of a repository of stories is just jazzy for me,” Brown-Grooms says. A pastor by day, she says her life’s work “revolves around having hard conversations with people who would rather not talk to each other.”

The One Small Step interview begins with one participant reading the bio of the other participant aloud. Sitting in front of your computer screen in the comfort of your home or office, you’re immediately forced to readjust. To inhabit the feelings and thoughts and experiences of a very different human being.

The interview process goes far beyond the problematic platitude “we all have more in common,” which ignores our innate differences, our distinctions that should be valued, respected and celebrated. In practice, One Small Step shatters the rose-colored patina of “more in common.” The 40-minute interview allows people to connect without having connections. It allows people to sit and listen.

Isay and Brown-Grooms and Neal all admit it’s an intimidating process. The interview is not supposed to be a battle of the minds. The idea is that each participant will simply share some stories about themselves and ask the partner to do the same. It’s not meant to be scary or confrontational. But still, the program asks people to be vulnerable.

Thirty years ago Neal was a banker, and his workplace would hold meetings with guest speakers. One day the speaker was an African American minister who, at the close of his session, posed a question: “When was the last time you spoke to someone of a different color about race?” Met with slack jaws and wide eyes, the minister continued, “If we never talk about it, it will never get better.”

That one interaction prompted Neal to search inside himself – and his family tree – to see what he could do in his daily life to participate in these kinds of conversations. “She will always be a part of my life,” Neal says of Brown-Grooms. He encourages anyone who “has an inkling” to talk to someone to sign up for the experience.

While the average person probably does not possess the insight and eloquence of practiced storyteller Brown-Grooms, she too believes that everyone would benefit from a few initially awkward or uncomfortable conversations.

“The opposite of love is not hate,” Brown-Grooms says. “It’s fear.”
A year’s worth of Zoom calls between seemingly disparate humans may not solve the world’s problems. It may not even solve a day’s worth. But it’s a start.

“No one is a clean slate,” Brown-Grooms says. “As you watch them you begin to see clues of who they are and why they are. There’s always a reason.”

You can listen to the full conversation between Brown-Grooms and Neal at vpm.org. If you’re interested in participating in One Small Step, get started by filling out the questionnaire at surveys.storycorps.org/surveys/oss-questionnaire/?station=VPM.