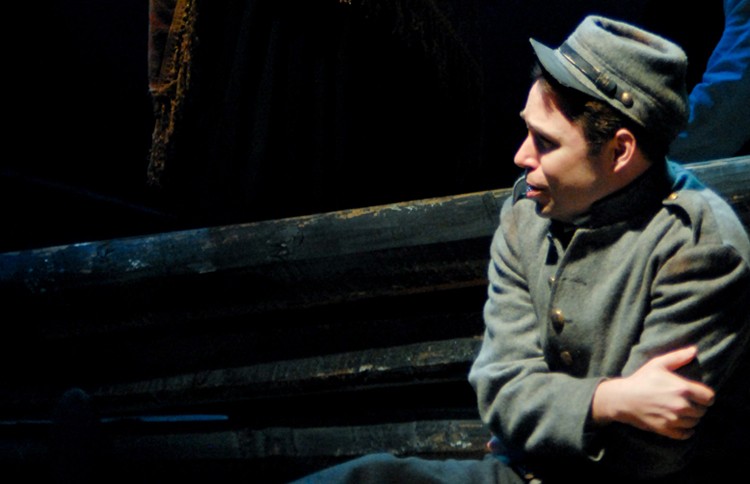 I recalled a line by writer Anne Lamott while sitting in Norfolk's Harrison Opera House this past April, waiting for the curtain to rise for the premiere of the music-theater work, "Rappahannock County," at the Virginia Arts Festival: "Hope begins in the dark."

How true of a moving theatrical performance when very affecting music soars, like the murky, rapidly rising Rappahannock River — here, a potent symbol of the momentum and personal impact of a nation at war with itself.

The occasion for the work's commissioning is the Civil War's sesquicentennial. University President Edward L. Ayers, adviser to the creative team, came to Norfolk's debut after participating in a Charleston, S.C., Civil War program commemorating the Battle of Fort Sumter. His award-winning book, "In the Presence of Mine Enemies, Civil War in the Heart of America, 1859-1863," which tells the story of one Northern and one Southern community during the war, provided the inspiration for "Rappahannock County."

Mark Campbell wanted to set the work in the Old Dominion, he says, because "Virginia suffered the most and was the most conflicted about seceding from the United States." For a team that hadn't collaborated previously, Campbell and Gordon have done a masterful job, as have the actors and singers. "People aren't used to singing about dying of typhoid fever on stage," Ayers aptly states. Lyrics about "Breathing through a camphor-scented handkerchief" come out with the melodic grace of an easy ballad.

Chesapeake native and rising soprano Aundi Marie Moore's rendition of "Hallie-Ann" — a song about a newly freed slave turned "contraband" of war placing her dead infant in a coffin — brought tears to the eyes of many in Norfolk's audience. With only five performers (three white and two black), the actors play between five and eight roles each and sing more than 20 songs with more than a dozen instrumentalists.

Each song tells a story, but unlike most operas or classic musicals, no single, coherent narrative runs through the piece. Like the minimal staging with platforms, basic costumes appropriate to the period allow for characters' easy transition from one role to the next with the help of accessories and props. Kudos should extend to Norfolk native Rob Fisher, the music director with credits as an orchestral conductor and Broadway artistic director.

Purists can fuss about there being no Civil War battles depicted. But the specific Virginia setting is incidental to the universal theme of war's loss and hope, which is nowhere expressed better than in the finale, "Spring Will Return Again/Rappahannock." S

"Rappahannock County" will be presented Sept. 13-15 at the Alice Jepson Theatre in the Modlin Center for the Arts at the University of Richmond. Show times are 7:30 p.m. Tickets $23-$45 (discounts available for employees and students). For information, go to modlin.richmond.edu or call 289-8980.