A second City Council member comes out in opposition to the mayor's ballpark proposal. 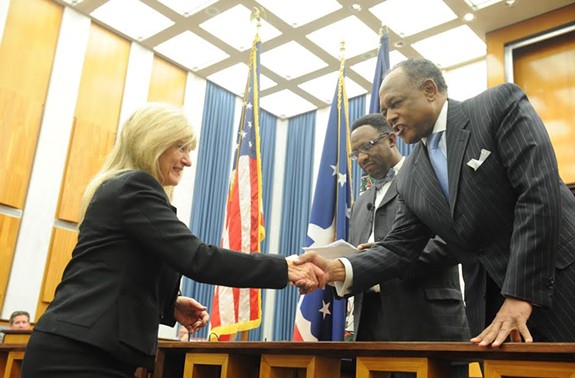 Move one more to the no column, or in this case, the hell-no column. Mayor Dwight Jones needs the support of seven out of the nine members of City Council to make his ballpark plan a reality, and last week, 8th District Councilwoman Reva Trammell said she intends to vote against the plan.

She joins 5th District Councilman Parker Agelasto, who previously had been the only likely vote against. Trammell had been a toss-up, but she said she made up her mind after a meeting with her constituents, whom she polled.

“Ninety seven said ‘hell no’,” she reports. “Only 15 supported it. I’ve got to go with my people on this. … There's nothing in the deal for us. It’s for the developers who are going to get richer.”

Based on public statements, past votes and unsubstantiated hunches, that leaves Jones with five likely yes votes: Ellen Robertson, Michelle Mosby, Kathy Graziano, Jon Baliles and Cynthia Newbille. Please note this is just a prediction and it could change -- none of these council members have unequivocally said they are going to support the plan.

The critical toss-ups, then, are Council President Charles Samuels and Chris Hilbert. Neither will be easy to persuade, but if the mayor wants his stadium, he’ll have figure out a way to bring them over to his side.


Previous: Does the Mayor Have the Votes to Get His Ballpark Plan Through City Council?