Richmonders grapple with how to respond to plans for a giant, roadside flag. 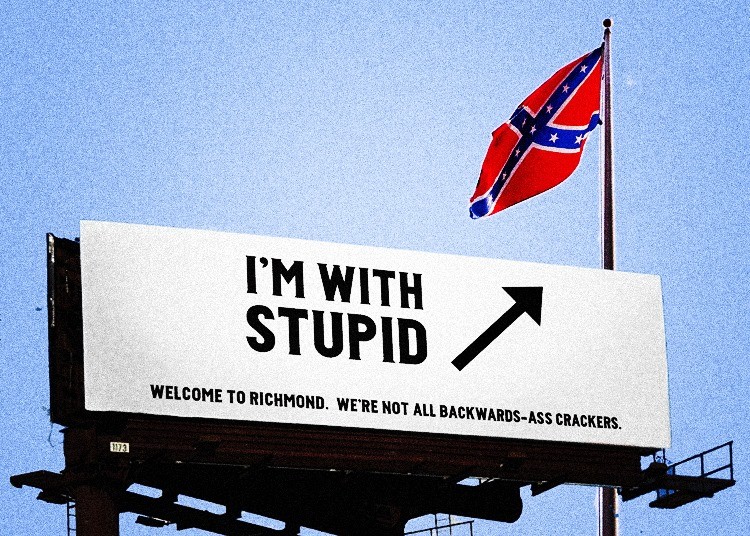 Many Richmonders let out a collective groan of disgust upon learning of a local group’s plan to install a Confederate flag just off Interstate 95 in Richmond.

One of the first suggestions to come in on Style’s Facebook page: On an adjacent parcel construct a 300-foot-tall statue of Calvin pissing toward it.

The conversation moved quickly from there, and now words like “counter messaging” are being thrown out and cheeky mock-ups of billboards are flying around on social media.

Richmond graphic designer Doug Dobey created the one above. “It kind of speaks for itself,” he tells Style. “I don’t think that I need to say much more on it.”

City Councilman Jon Baliles shared a tamer take on his campaign’s Facebook page. It features the RVA logo and says “This is RVA / Not the C.S.A.”

Baliles says he respects Virginia Flaggers’ right to fly the flag. But he also thinks it’s important to offer a response. “We also need to let the world know that Richmond is a much different place than it was 15 years ago, much less 150 years ago,” Baliles says.

(For the record, the Virginia Flaggers dispute that the flag is racist or offensive. There's more on that in our last story.)

How realistic a billboard is depends on how much money people are willing to throw behind it. They can run anywhere from $2,000 to $10,000 a month depending on the location. Beyond indicating that it will be just south of the city on I-95, the flaggers declined to say exactly where their flag will go.

So far, no fundraising appeals have appeared. Sam Davies, a local IT consultant, formed an online discussion board to hash out what one might lookout. He says the group is less interested in chiding the Confederates with a countering billboard than in harnessing Richmonders’ distaste to raise money for causes that counter racism. He hopes to have a plan and website in place by early next week.

“My first instinct was to troll the troll,” Davies says. “The strong opinion right now is to meet the hostility with some kind of kindness.

“The price we pay for free speech is that a very vocal, extreme minority can take over the message. The Confederate flag does not represent even the smallest fraction of Richmonders. So while I respect anyone’s right to free speech, we also have a right to use our free speech to show we don’t care for it.”