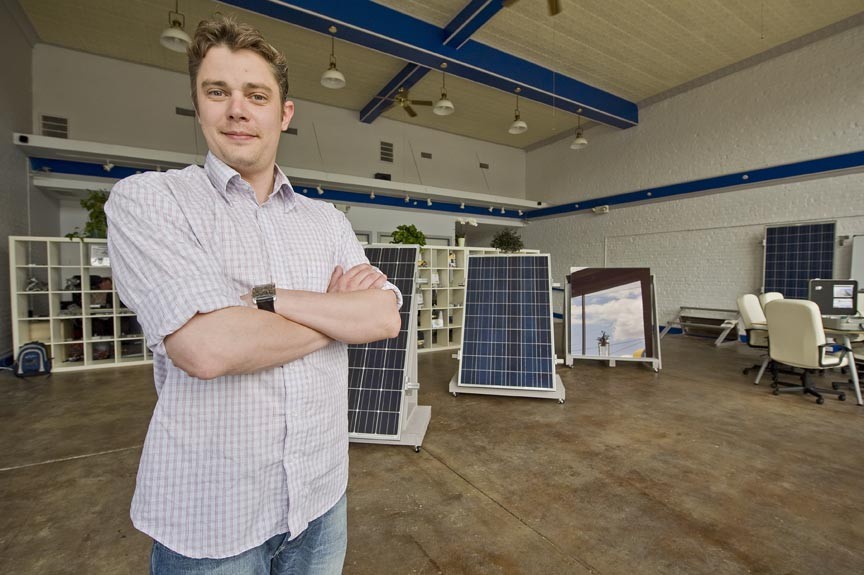 A major German solar power company has just opened its first American office in Richmond. Not because we're so forward-thinking; because our neighbors are.

Abakus Solar USA is a solar equipment supplier, broker and adviser for local contractors. After compiling a 400-page market study, its chief executive, James Huff, picked Richmond for the company's American launch, mainly because it's within a six-hour drive of several major cities and because of its proximity to the port of Norfolk.

Last week, the company opened the doors of its bright showroom on the Boulevard, in the former Velocity Motorcycles building. Fighting fish flutter in water-filled vases while large solar panels on wheeled stands soak up the rays. It all feels so very eco (except for the gasoline vapors that drift in from the former garage). But 31-year-old Huff is the first to tell you he's not a green crusader. He's a businessman.

Virginia itself is "a virgin market" for solar, Huff says. Why? Virginia offers no tax credits or significant financial incentives for solar energy, even though it imports more power per capita than any other state.

Businesses and homeowners with solar panels can sell their unused electricity on the open market, but Virginia's power companies aren't required to buy it. Today, selling solar energy on the open market in Virginia nets a "paltry" $75 per credit — equal to 1,000 kilowatt hours of electricity — explains Chad Laibly of Continuum Energy Solutions in Alexandria. In New Jersey, where power companies are required to derive a certain percent of their energy from renewable sources, one credit has recently been selling for about $600. "It's a real struggle in Virginia," Laibly says.

If "Virginia were to set a price for renewable energy, this would be the renewable energy capital of the East Coast," Huff says. Banks and businesses would be willing to invest in solar energy, he explains, because they could then count on a certain return.

Abakus intends to lower the cost of solar locally by making panels and specialized equipment readily available to contractors. The more panels are installed, the cheaper solar energy will get, Huff says: "Prices go down, more people buy it, everybody's happy."