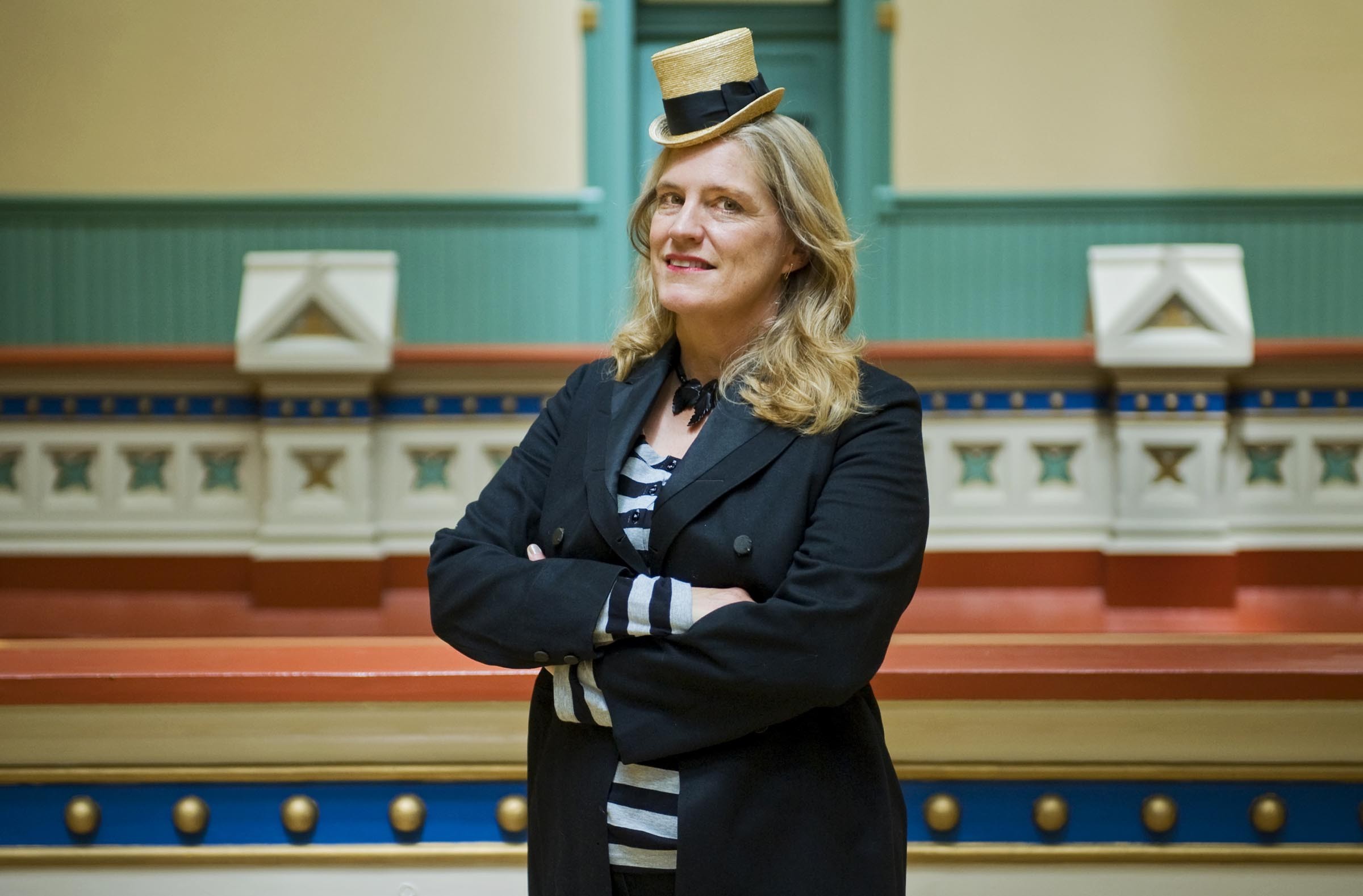 Amy Andrews Harrell spends so much time picking out clothes for other people to wear that it must seem like a challenge choosing a gown for herself to wear to the Emmys.

Splitting her time between Richmond and New York, Harrell is the costume designer for Louis C.K.'s critically lauded FX sitcom, "Louie," and has worked on such films as "The Patriot," "Kate and Leopold" and "Signs." She won an Emmy for the 2008 HBO miniseries "John Adams" and this year is nominated for outstanding costume design in a miniseries, movie or special for her work on the National Geographic Channel's hit docudrama, "Killing Lincoln," filmed in and around Richmond and Petersburg in 2012.

The 48-year-old and her costuming team, which includes assistant costume designer Brad Watson of Mechanicsville, will find out how they fared this Sunday when they attend the Creative Arts Emmy Awards in Los Angeles.

"We really are a grass-roots, ragtag team, and I'm so thrilled that we as a team got this nomination because we built this out of clay," Harrell says.

For "Killing Lincoln," she says, they had to be prepared for any situation that might be thrown their way — in a short period of time. "We built Mary Todd Lincoln's dress from scratch and the actress who was on stage when Lincoln was shot," she says. "And we had to build Tad Lincoln's little [Union] uniform."

The work of Harrell's team speaks for itself, says Mary Lisio, executive producer of the Lincoln docudrama. "The film featured an enormous group of key historical figures and extras that needed to look the part of the 1860s, and her work rang with authenticity, which was of paramount importance for this production." As for "Killing Kennedy," which brought the production team back to Richmond, she says, "We think when viewers see it in November they'll agree she knocked it out of the park again."

Harrell has lived in Church Hill since 2005. She and her husband, Mike — a longtime Richmonder and an assistant prop master on CBS's Sherlock Holmes show, "Elementary" — met in South Carolina while working on the 2003 Jude Law film "Cold Mountain." When they aren't working in New York, they can be found walking Puck, their cairn terrier, at Chimborazo dog park.

Harrell developed a reputation as one of the leading film costume supervisors on the East Coast, but in recent years has begun working as a costume designer. She says it's like being promoted from sergeant to general. The designer oversees a production's costume shop, researches clothing styles, designs and chooses wardrobe and must be on set for fittings and in case of problems. "You really have to clone yourself," she says.

She also collaborates closely with directors and actors. Harrell has worked with such actors as Hugh Jackman ("He's just so genuine and lovely"), Heath Ledger and Mel Gibson. She dressed director David Lynch for his memorable appearance as a late-night television talk show executive on "Louie," and spent considerable time with Billy Campbell (Lincoln) and Rob Lowe (Kennedy), discussing the fine points of their transformations.

"Amy's so smart and creative and interesting," says the executive producer for "Louie," Blair Breard. "She brings her incredible sensitivity as to what's important to Louis as the director and creator of the show. No one else has managed to do that, and she is incredibly sensitive to him and his sensibilities of character. ... His driving force is authenticity. If it's not authentic, he just doesn't want anything to do with it." 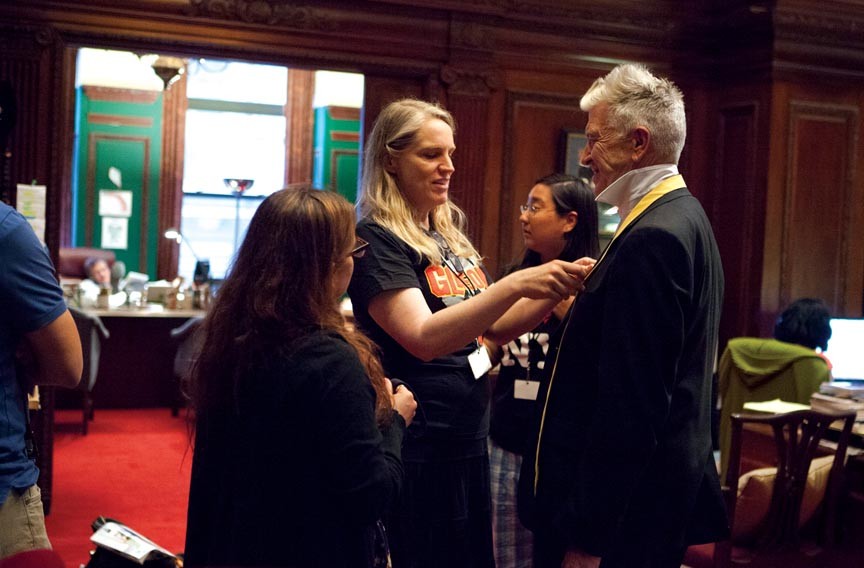 That's a challenge for a costume designer, because you don't want the show to look designed. "There's nothing dramatic or wildly sexy about what she's doing to a layperson's eye," Breard says, but that's kind of the genius of it. Everything has been chosen and thought about. It's sort of a thankless job in a way. No one really notices all the thought that's gone into everything."

Her zeal for authenticity shone through in "Killing Lincoln." She tracked down a duplicate of Abraham's Lincoln stovepipe hat from a hat maker in Rome and asked a vacationing friend to fly home with it on his lap. Working with local tailors Kathy Washington and Robert Surratt and Petersburg milliner Ignatius Creegan, she reconstructed dresses and the bonnet Mary Todd Lincoln wore to Ford's Theater the night of the assassination.

"It's preserved somewhere, so we had the actual research ... and to bring that to life really put it into another realm," says Harrell, who also worked as key costumer on Steven Spielberg's "Lincoln," helping to outfit extras — many of them Richmonders.

Harrell hopes that state economic incentives for filmmaking keep luring such projects to town so she can work near home. "It's such a wonderful place. I love my old house and I love my old neighborhood," she says. "It's a great place to film so hopefully they'll keep coming."

Five ways I design for authenticity.

We use museums a lot. For Spielberg's "Lincoln," I went to the Library of Congress to research and I got to see Mary Todd's pearls that Joanna Johnston recreated for Sally Field. For "Killing Kennedy," I went to Dallas to the Sixth Floor Museum. They had huge blowups of the iconic photos so I was able to see, for example, that when Oswald was arrested and he was brought out of the police station, he was in penny loafers. They were very worn and obviously something he wore a lot. I never would have seen that in a regular photo. I was consumed of course by Jackie's pink suit and at the museum I was able to come face to face with an enormous color enlargement of the collar and saw how it was quilted so I could get the authenticity of that. I was very excited. It was another piece of the puzzle.

Wardrobe and costume design is much more than a one-person job. I would not be able to do this without my team's friendship, talents and support. They lifted me up on this. On "Killing Lincoln" alone, I worked with [assistant costumer designer] Brad Watson, [sewing shop head] Kathy Washington, [tailor] Robert Surratt, [costume supervisor] Rene Jones, who was nominated for the Emmy with me, [set costumer] Amelia Zontini, and [uniform supervisor] Dana Bogdanski.

We don't know how to do halfway. On "Killing Kennedy," we had Rob's belt buckle, which was a very nice silver Brooks Brothers belt buckle authentic to the period, we had it engraved for him JFK even though no one would see it. I guess it's because I'm insane, but that kind of made it real for the JFK we created.

One of my most important jobs is collaborating with the actor to interpret the character. I have to make sure the costumes fit but I also sometimes educate the actor on the costume, even how to wear the costume or how to walk in the costume. For Booth, tie pins were important because he wore a particular type of tie that needed them and so Jesse [Johnson] and I would pick them out.

5. Pay attention to the "motion" in motion pictures.

I'm very excited about the way costumes move through space. I always have been. I guess I'm a method costume designer because I just imagine the history and everything it took to bring that moment in time to life. In whatever era I happen to be designing, I picture costumes in motion rather than standing still, like how a person will look walking down the street.