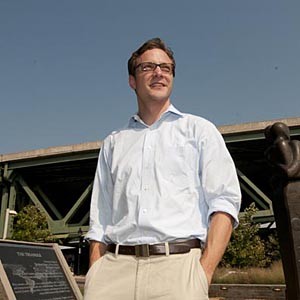 Richmond has always been a community deeply divided by race. Preacher Corey Widmer travels both worlds.

He serves as staff preaching pastor for a large West End church, Third Presbyterian, while volunteering as co-pastor for a smaller congregation, East End Fellowship, which he helped found two years ago in his neighborhood of Church Hill.

Blighted by decades of intense poverty, Church Hill has improved its image while becoming more gentrified. With that comes a greater need for communication, Widmer says, to deal with a deeply rooted lack of trust among longtime neighborhood residents.

Between such different congregations and communities, Widmer sees his primary role as a bridge-builder toward racial reconciliation.

“I have to say with great regret that the church has often contributed to division and segregation rather than healed it,” says Widmer, a University of Virginia and Princeton Seminary graduate who moved to Richmond five years ago with friends.

“The reason the Gospel went off like a bomb in the early first century is that people who had never been in relationships were suddenly loving each other,” he says. “To me, the Gospel of Jesus Christ is about reconciliation and grace.”

Widmer says Third Presbyterian, which moved from Church Hill to the West End in 1956, has been a strong supporter of East End Fellowship and Church Hill Activities and Tutoring, a Christian community-development organization that helps at-risk youth.

Meeting Sunday afternoons at the Robinson Theater, the East End Fellowship focuses on providing a multiethnic gathering for worship with special attention to youth. Widmer reels off statistics that help explain the need for such a community haven: 82 percent of families in Church Hill are single-parent households, and 37 percent of households are below the federal poverty line.

“We're seeking the shalom of the city, or flourishing,” he says. “Because what is good for the city is good for all of us.”