Scott Elmquist Some of the murals painted by outside artists in the Richmond Mural Project succeed in creating conversation and making an impact, such as “Crash Dummies” — by Polish artists Sepe and Chazme, at 918 W. Grace St.

For its third year, the Washington-based gallery Art Whino has paired with RVA Magazine to sponsor the Richmond Mural Project. Ten artists, hailing from the United States, Australia, Poland, Switzerland and Mexico, have completed 18 murals scattered throughout Richmond.

Almost all of them are trained graphic designers or self-taught graffiti artists. To summarize: A gallery outside Virginia has brought in international talent — boys club only — to transform the city in order to "establish the city as a premier art destination."

Politics aside, what about the murals themselves as art objects?

That's the question I set out to answer. Armed with a carefully mapped route and a GPS, I think I can easily navigate the city to see the murals in two hours. Instead I end up missing several murals, circling around blocks repeatedly and very nearly causing a few accidents.

Rather than a series of destinations, the murals work best as accents and unexpected discoveries in the daily grind or for the visitor meandering through the city. At their worst, the murals offer nothing more than trendy, tattoo-inspired doodles displayed on a monumental scale. Contrary to most Americans' sentiments, bigger isn't always better. This year's project has brought both ends of the spectrum.

The recently deceased American artist, Walter de Maria, declared in 1968, "I think both art and life are a matter of life and death." Known mostly as a land artist — "Lightning Field" (1977) being his most iconic work — de Maria's career fluidly translated through media and movements. For de Maria, successful art, akin to life itself, evokes seriousness, importance and intellectual weight. It initiates critical conversation or sparks a debate. It creates a space for asking questions rather than closing statements, leaving behind indelible imprints on the viewer.

"Doom Loop," by the Swiss duo Wes 21 and Onur, aims for that. At 501 E. Grace St., the sci-fi scene depicts a technological battle of sorts between a washing machine satellite, a mosquito-surveillance airplane and an uprooted Victorian house. Easily lending itself to a narrative, the mural conjures up feelings of isolation, Big Brother surveillance and general uncertainty. It teeters on Hollywood-Spielbergian story lines but sidesteps falling into them. 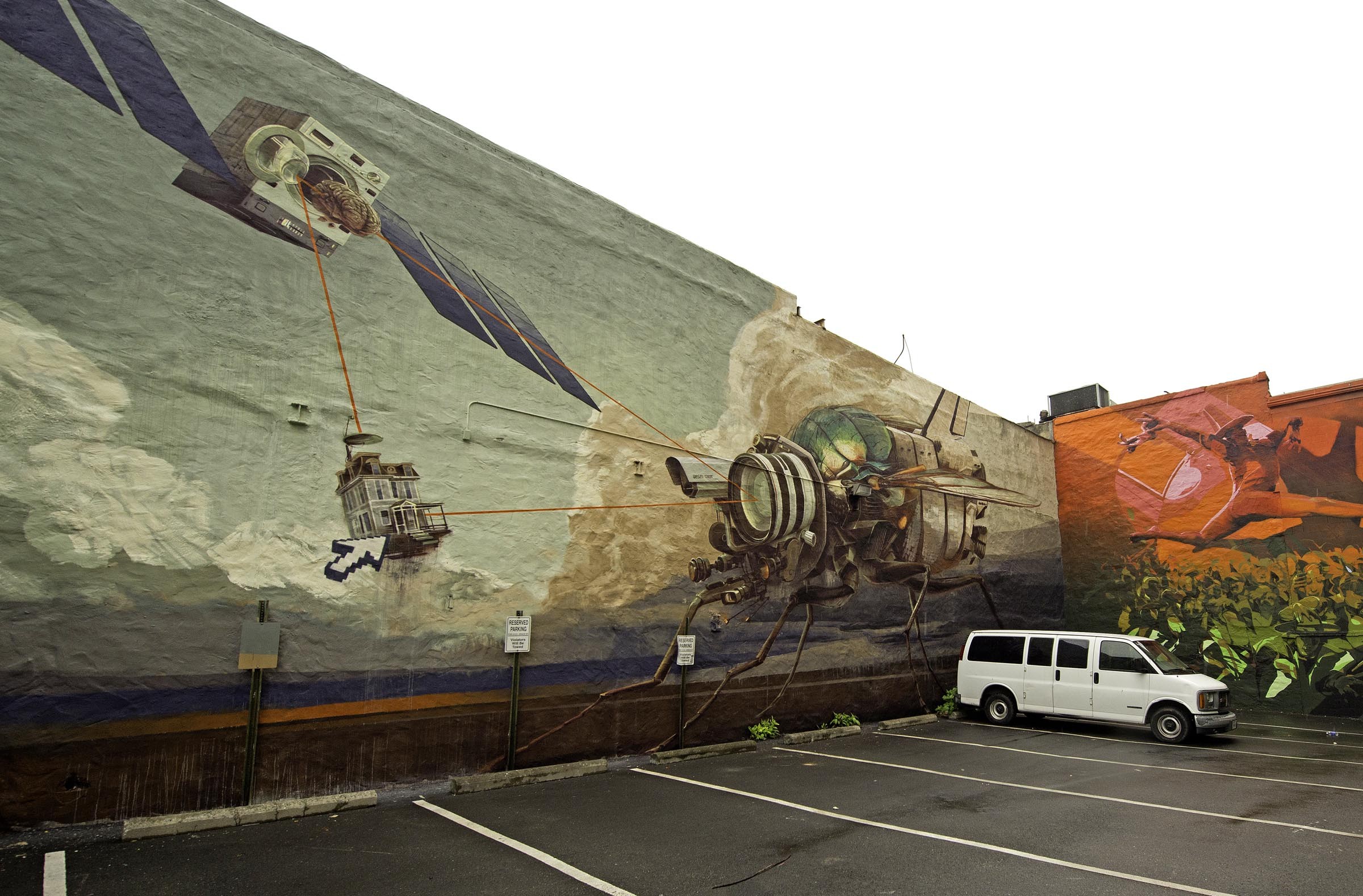 Polish artists Sepe and Chazme 718 have teamed up for "Crash Dummies." In the middle of Virginia Commonwealth University's sprawling campus at 918 W. Grace St., the mural is pinned between a construction site, a parking deck and the Grace Street Theater. But it's a must-see. The mural depicts a congested architectural space divided by two-point perspective. Within that space, a series of figures dressed in orange hazmat suits congregate in two vignettes. While the figures, comprised of large hulking frames and diminished heads, seem to exude weight and form, their sketchy depiction softens their commanding presence.

Like "Doom Loop," "Crash Dummies" begs a story. The artists have offered even fewer answers, leaving the viewer to imagine at will. Similarly, the perspective, large-scale depiction and opening onto the parking lot invite the viewer squarely into the middle of the scene as a participant rather than a mere observer.

In contrast, works such as David Flores' four depictions of Woodstock the bird from "Peanuts" trivialize the endeavor. Peppered throughout the city in a variety of monochromatic palettes, the well-recognized bird easily is overlooked because of its familiarity; Flores has done little to manipulate the image. Instead of provoking conversation, the murals become just moments of discovery that recede into distant memory almost instantly.

Still other murals, including Ekundayo's at 301 S. Laurel St. and Smitheone's at 104 S. Colonial Ave. sit uneasily in the middle of the spectrum. Ekundayo's mural depicts a large, purple camel set within a fantastical Dr. Seuss-inspired scene of colorful blob-sprouting mushrooms and anthropomorphized houses. On Idlewood Avenue right off the Downtown Expressway, it will be seen by many unlike some of the other more inaccessible spaces. Similarly, Smitheone's mural of a skeleton flanked by two seated dogs and swirling threads of smoke sits at the end of Carytown. Each reads as a glorified doodle enlarged to a monumental scale. They're interesting and eye-catching, but do they really aid in "establishing the city as a premier art destination"?

Spurred by the popularity of street artists such as Banksy or Shepard Fairey, graffiti has redefined itself as an acceptable art form. It appears in the gallery or museum as fine art and on the streets as civic murals for beautification, tourism and revitalization. Although no longer truly rebellious, the most successful examples retain a satirical, political voice that questions rather than answers in an effort to initiate critical engagement. Like the art of the '60s made by de Maria and his peers, the best murals seek to achieve an art form that mirrors the gravity of life itself. S

For a list of murals and their locations visit artwhino.com/murals.