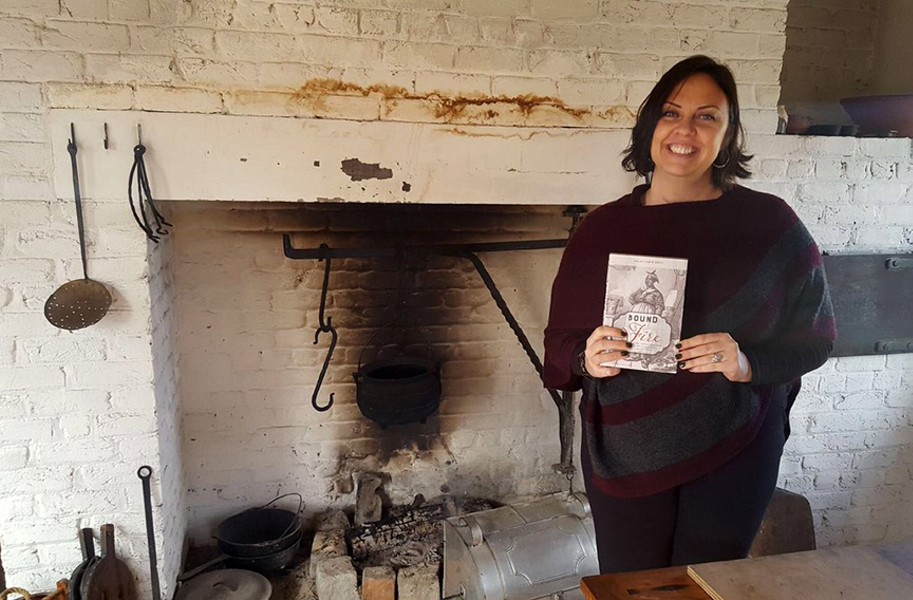 Author Kelley Fanto Deetz holds a copy of her book “Bound to the Fire: How Virginia’s Enslaved Cooks Helped Invent American Cuisine.” She’ll be speaking at the Virginia Museum of History & Culture on Feb. 27.

Southern hospitality was central to building our nation, forging political partnerships and sustaining a nation. But it also relied on enslaved butlers, maids, cooks and waiters, a roster of enslaved domestics who made sure every guest was treated well.

An enslaved woman who cooked on a plantation worked painfully long hours, often beginning before dawn. Plantation elite expected three meals a day for any free person visiting or living on site, so cooks had to make both planned and on-call meals. Cooks were in the kitchens 24 hours a day, waking up before dawn to make sure the household had hot food for breakfast, before cooking lunch - the largest meal of the day- and a supper served for early evening. The prep, cleanup and the cooking on an open hearth occupied their days and nights.

According to Kelley Fanto Deetz, author of “Bound to the Fire: How Virginia’s Enslaved Cooks Helped Invent American Cuisine,” having blacks in charge of food preparation changed our Southern foodways. Along with human cargo, key crops made their way across the Atlantic, including okra, watermelon, millet, yams, black-eyed peas, and rice, not to mention cooking techniques, recipes and flavor profiles.

“Many of the dishes we take pride in as being American, like gumbo or jambalaya, are the direct descendants of West African dishes,” Deetz explains ahead of her talk at the Virginia Museum of History & Culture. “By the 19th century, these African dishes were written into the recipe books of Southern plantations and became synonymous with American cuisine.”

Food for the slave owner’s table came from not just the plantation, but from around the Atlantic world where enslaved Africans were producing rum and growing coffee, pineapples, tobacco and sugar. Deetz, who is the director of programming, education and visitor engagement at Stratford Hall, is overseeing a series of colonial foodways programs to highlight the roles that food played in building the nation.

Once she began digging into the subject, she found that the pervasive narrative was that the white mistress actually was cooking the food, perhaps getting a little help from the enslaved cook. Through archival and archaeological research, oral histories, ethnography and cultural landscape studies, she learned that enslaved cooks were highly skilled, professional and rooted in their West African culture, both religiously and culinarily. As a result, they were subversive, resisted and at times wielded power over their enslavers.

One way was with poison in food.

“The ability to poison gave them a level of power that wasn’t afforded to other enslaved laborers, because they could kill a whole family with a tureen of soup,” Deetz says. “The risk of punishment or execution likely kept this from being commonplace, however, it absolutely did happen.” Conversely, some enslaved cooks who didn’t use poison were accused and executed for what was likely unintentional food poisoning.

Anyone who has ever been on a plantation tour has likely heard that the plantation kitchens were located away from the main house for two reasons: the smell and the risk of fire. But there was a deeper reason, too.

“Moving the kitchens outside was a way to physically designate a difference between laborers and the elite,” she explains. “This happened towards the end of the 17th century, when race began to be a strong marker of social class.”

“But they were always under the watchful eyes of the plantation family,” Deetz says. “They were never truly off and had to live and work within the white household, which brought a continual level of stress.”

Ultimately, Deetz’s goal with the book and her programming at Stratford Hall is to debunk the myths around the enslaved cooks whose images were used as propaganda during the 19th and 20th centuries — think Aunt Jemima and Uncle Ben — to sell the ideal of happy, loyal slaves. It was a myth that made its way into grocery ads and into the minds of Americans.

“Their skills were incredible, their recipes were outstanding and their contributions are significant,” Deetz says. “When you know their history, you know the history of America. African cultures are part of this country’s DNA.”

The Banner Lecture with Kelley Fanto Deetz, author of “Bound to the Fire: How Virginia’s Enslaved Cooks Helped Invent American Cuisine,” will be held Thursday, Feb. 27, 6 p.m. at the Virginia Museum of History & Culture.