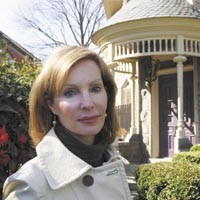 Jennie Dotts wants a new fence. Well, an old fence actually, a wrought iron beauty, hand forged at Tredegar Iron Works in the mid-19th century, but it has taken her 10 months and a city ordinance to get it.

Dotts, a professional preservationist, lives in Church Hill and must run any exterior change she wants to make to her house past the city's architectural review board. She says the board's over-zealous misinterpretation of its own guidelines leads to cases such as hers, where a drawn-out, bureaucratic obstacle course must precede adding something as simple as a gate from the same period as her home.

Not so fast, says David Johannas, chairman of the city's Commission of Architectural Review, who says it ensures the authenticity of  neighborhoods. Adding a gate that wasn't physically at that address during the home's period of historic significance, is the architectural equivalent of wearing drag. If there was a fence that went in, Johannas says, he would have preferred one that didn't give a false impression of having been there all along. The review board voted to not allow the fence last June and again in October. This month, after appealing to City Council, the decision was reversed by a ordinance.

To Dotts, this creates an absurd scenario where the very body charged with preserving the historic character of her neighborhood may as well be advocating vinyl railings over a salvaged artifact from the period.

The issue has become a philosophical fault line within the preservation community.

“We need to revisit those standards,” says Gibson Worsham, director of historical architecture for the local firm 3North. “In Richmond, in particular, they have been applied in a pretty rigorous way here and it hasn't always resulted in the best situation.”

Worsham has frequently run into situations where a new building is going into an historic district, but not been allowed to reproduce the “typical Richmond cornice,” and fit in with the neighbors.

Rachel Flynn, the city's community development director and ardent preservationist, says it's worth it to preserve the authenticity of the buildings. “It's very hard to legislate history, legislate design, but we do because it's worth it,” she says. “If we do it right, we'll have a city that's well thought out and well cared for. I commend the commission for taking on that hard job.”

As an architect and City Council member, Bruce Tyler is familiar with the issues. He voted in favor of the fence saying that while historic preservation is important, moderation is too.

“Fence by ordinance,” Tyler muses. “It's a little convoluted but this is where we are in life.”