History may reign in Richmond. But residents are growing to accept modern architecture within their traditional world. 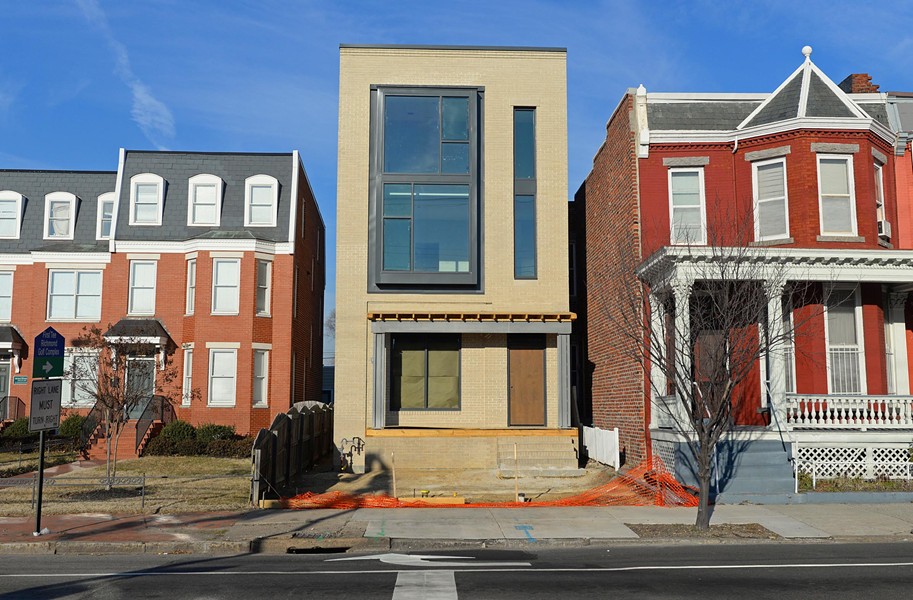 Plans for a modest, two-story frame house in the Springhill neighborhood are circulating among residents and city planning channels.

These aren’t some shocking schematics. A local couple wants to build an infill house that should meld politely with the neighboring and traditional collection of mostly frame bungalows and Cape Cods. But this former working-class pocket of town has the distinction of being the only old and historic district in South Richmond — so design restrictions are tight.

Future generations rightly might scratch their heads and ask: “Did Richmond’s architectural thinking stop in the early 20th century?”

On a sliver of a lot on Jackson Ward’s West Leigh Street near the Bill “Bojangles” Robinson statue, a strikingly crisp, three-story townhouse has taken final form amid a row of red-brick townhouses.

It’s a joint product of fresh blood — a client from Atlanta who will live here — and one of Richmond’s well-regarded architecture firms, SMBW. It long has been a proponent of modernism here. The architects strategically held their first client meeting within the bright-white, spatially dramatic confines of the Virginia Museum of Fine Arts. A clever starting point, considering it was associate architect for the museum’s expansion — a project that signaled a sea change in the public’s embrace of modernism locally.

“We took in such things as how the light filters in and how the bridges cross and translated this into a three-story house with light wells,” says Josh McCullar, an architect with SMBW. He says the open plan, influenced by house designs from contemporary British architect John Pawson, also should serve as excellent space for the client’s art collection.

“At the end of the day it’s not that difficult to do something that fits with the neighborhood,” McCullar says of so stark a statement that stands adjacent to decidedly Italianate structures. “There’s the appropriate setback and a porch that ties into the vernacular of the street.” He says the city’s Commission of Architectural Review concurred. 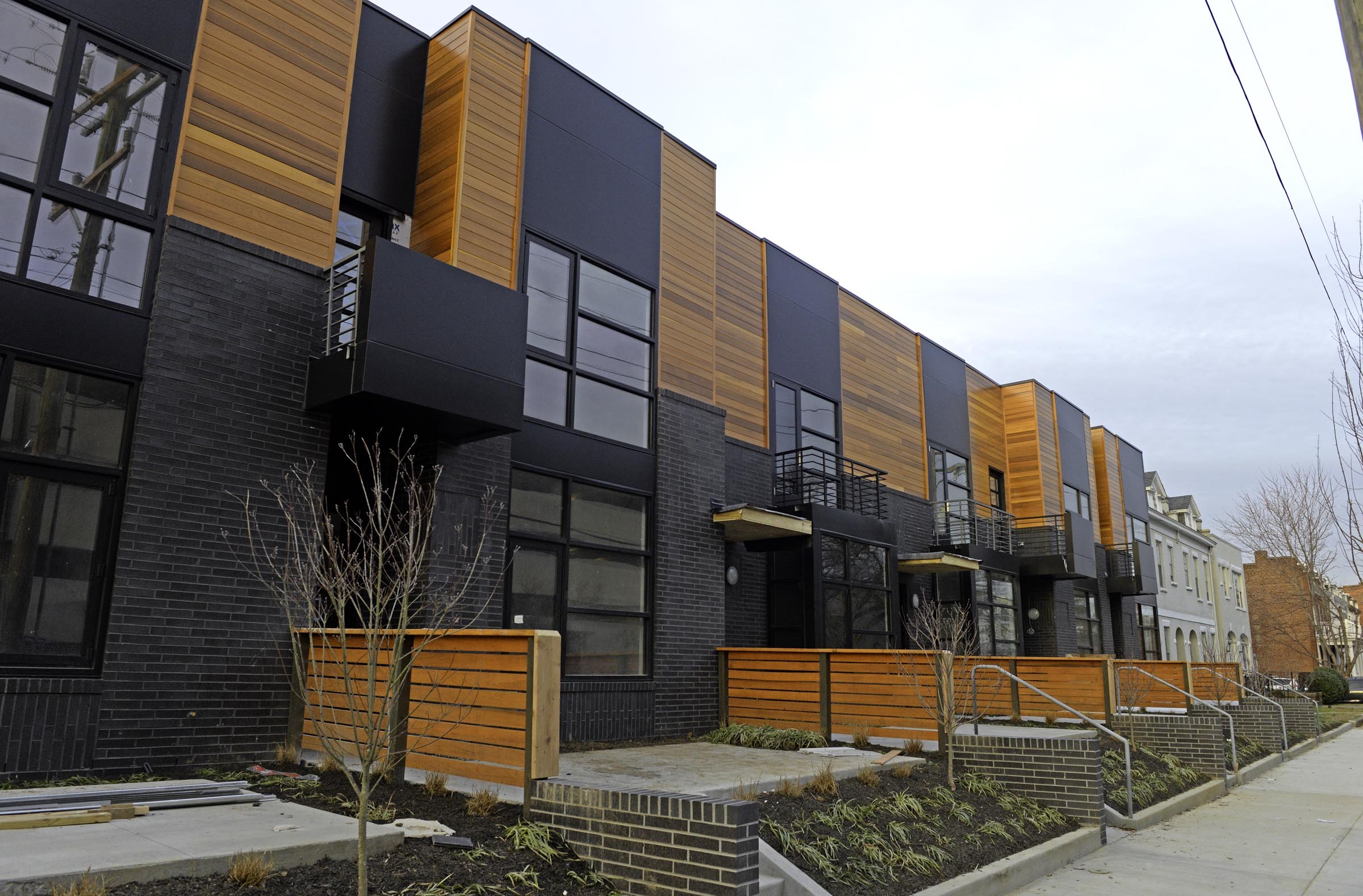 Across town in the Fan District, in the 2600 block of Floyd Avenue, residents are about to move into Citizen 6, six attached and handsome townhouses. Baskervill, one of the city’s oldest firms, has designed open interior living areas with generous light wells and icebox-white walls.

The exterior offers an almost shocking contrast with first-floor walls of black, glossy brick, and a warm, wooden surface on the second level.

At a site overlooking Swan Lake in quiet Byrd Park, neighbors are intrigued by a three-story house that’s risen between two red brick colonial revival houses. On this rare, in-town lakefront location, the Watershed architecture firm has flipped the house plan to create a dwelling you might expect at the north end of Virginia Beach or along the Carolina coast: living spaces on the top, bedrooms below and garage below that. Architectural drama occurs on the top level with a projecting “porch” sheltered by a butterfly roof.

“This creates a powerful connection between house and park — a spatial connection,” Watershed’s Patrick Farley says. “It’s the intersection of private versus public space, the aperture is like a giant dormer window.” In addition to the upper deck, which offers spectacular views across the lake and toward Maymont, other new outdoor spaces include a roof garden and a terrace at the sidewalk level near the front door. 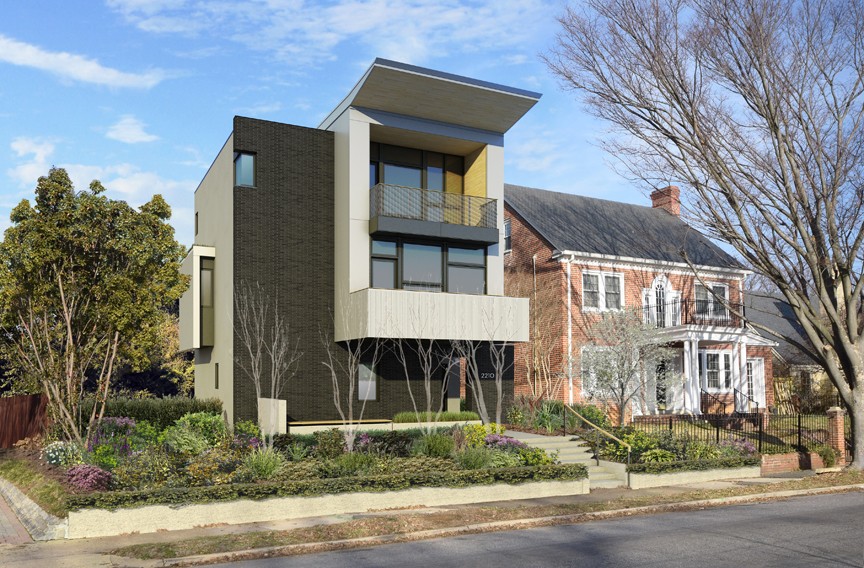 Are Richmonders ready for the shock of the new taking shape in old neighborhoods?

Apparently. One of the first purchasers at Citizen 6 is an architecturally erudite couple — empty-nesters who are leaving a modernistic house designed in the 1950s by Frederick Hyland, an architect who set the gold standard for modernism in Richmond.

Other architects have picked up the baton, and the modern is breaking through.