Confessions of a Cousin

Kings of Leon's guitarist on finally getting big in America, losing weight, and dealing with a naked lead singer. 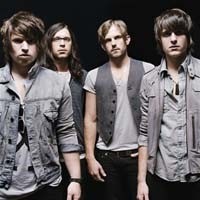 Kings of Leon guitarist Matthew Followill is a straight shooter when it comes to divulging the sordid details of life as a mega-rockstar in Kings of Leon, which earned the enviable cover of this month's Rolling Stone (in a sort of cowboy motif) and was dubbed “America's Hottest Band.” That article revealed other tidbits, like that the band members, three brothers and a cousin, go by their middle names -- singer Anthony “Caleb” Followill, bassist Michael “Jared” Followill, drummer Ivan “Nathan” Followill and guitarist Cameron “Matthew” Followill.

We caught up with Matthew just days before two Virginia shows and got the skinny on everything from his beloved Harley Davidson bikes to a late-night near-encounter with his unruly, naked frontman, and cousin, Caleb.

Style: Just this year, you guys sold out Madison Square Garden and finally got a Grammy. It's possible that maybe Americans are finally catching on and up to the rest of the world's adoration, but does it ever piss you off that it's taken so long to get big at home?
Matthew Followill: Well, after the first two records it just seemed kind of normal that we weren't going to be big in America. So, we just kind of stopped thinking about it really. Maybe that's what made it happen, that we just stopped caring. And now, it's finally coming around and we're starting to think about it again. I'm convinced that The Garden sold out because everyone came over from England for that show.

OK, speaking of being huge in England: How do four Southern boys deal with food there? Because it's a far cry from your grandmama's cooking back home I would imagine.
Man, I don't know. We always lose like 10 pounds over there. At least they have hamburgers though.

I hear they're not as good there, though. They taste gamey.
Yeah, they're pretty crappy actually. But yeah, last time I went there I lost like 15 pounds and then gained it all back when I started eating Burger King and mom's food again. I gained it all back, dammit!

I know you ride Harleys. Do you miss those when you are out on tour?
Yes. I have three of them now. Jared has one too and we were gonna bring them out and ride them on days off, but it didn't work out. So, I think we're gonna end up renting them. But yeah, riding is fun.

What else do you miss on the road aside from decent food and your bike?
God, everything really. The pressure to not have to do anything. I mean, I was thinking the other day how awesome it would be if after each show we got to go home that night and got to sleep in our own beds, and then maybe had another day off before another show .Of course, that will never happen. But, I mean really I miss everything. My TV, my couch, my bed. Knowing where everything is around you.

Given the pace of your life, what's the one thing you always have to have on or around you to get by?
My computer. I'm non-stop. Surfing the Internet, buying iTunes movies. I would be bored out of my mind if I didn't have it. I was never a computer guy, Jared was, but now I'm the geeky guy that always has his computer.

What's the most difficult part about touring with the brothers Followill?
It used to be really bad. It's not too bad now. I don't really see them as brothers so much. It's like, they are your family so you get along pretty well. But, it's also bad because someone will tell you something you don't wanna hear and it pisses you off. If you were in a band with your friends they wouldn't say certain things. Show common courtesy or whatever.

Let's talk bad habits. Anything you'd like to call the others out on? This is your chance to out them on anything and everything.
Nathan exaggerates a lot, to the point of almost being a liar. Some people may drink too much. There's some egos going around. That's about all I can say …

Without really getting in trouble, right?
Yeah.

What's up with Caleb's nickname, The Rooster?
Man, I don't know. He just likes The Rooster so he has an excuse to get really, really drunk and then people are just like, “It's alright, it's just Rooster.” And then he can piss everywhere.

And end up wandering around naked or something, right?
Yeah, that usually happens. Apparently, he tried to get in my room last night and I told him that would have been really weird for him because he would have woken up in his bed with two black eyes.

Do you have a nickname?
I don't know where I fit into all that. Some guys call me Lazy.

What's next for you guys?
We're touring til November, non-stop. Then some time off after that. Then probably start this whole thing over again and make another record. We don't have songs, but we've got some ideas for stuff. The studio is fun, definitely the best part. You just get to hang out and nothing is rushed. It's what comes next that sucks and is hard work.

Back to iTunes downloading, what's on your playlist these days?
I downloaded the White Lies. They're pretty awesome. Also, a season of the Tim and Eric Awesome Show. Pretty funny. Let's see … Glasvegas. I'm trying to be cool here and name some good bands.

It's OK, Matt, you can admit to downloading Kelly Clarkson the day it came out.
Nah, I didn't. But I downloaded some Miley for my girlfriend and I did listen to it.