Condoleezza Rice at the Landmark Theater 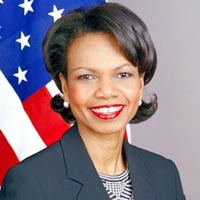 Wherever your political views tend to lean — whether to the left, right, or somewhere in a compromising middle — there are few who can argue that maintaining a global perspective hasn't become increasingly important within the past decade. Other than the president, no individual in the United States is more consumed by such a wide breadth of world issues — including national security, foreign aid, economic stability and human rights — than the country's secretary of state. Condoleezza Rice, previously the country's first female national security advisor, became a divisive figure of policy during her tenure with the Bush administration. Addressing the topics of terrorism and controversial decision-making, the Richmond Forum features the former secretary of state for a discussion, “The U.S. and the World,” April 10 at 8 p.m. at the Landmark Theater. $36-$70. 330-3993.