The financial district limps along as employees and visitors rarely venture downtown. Local business owners tell us what it’s like. 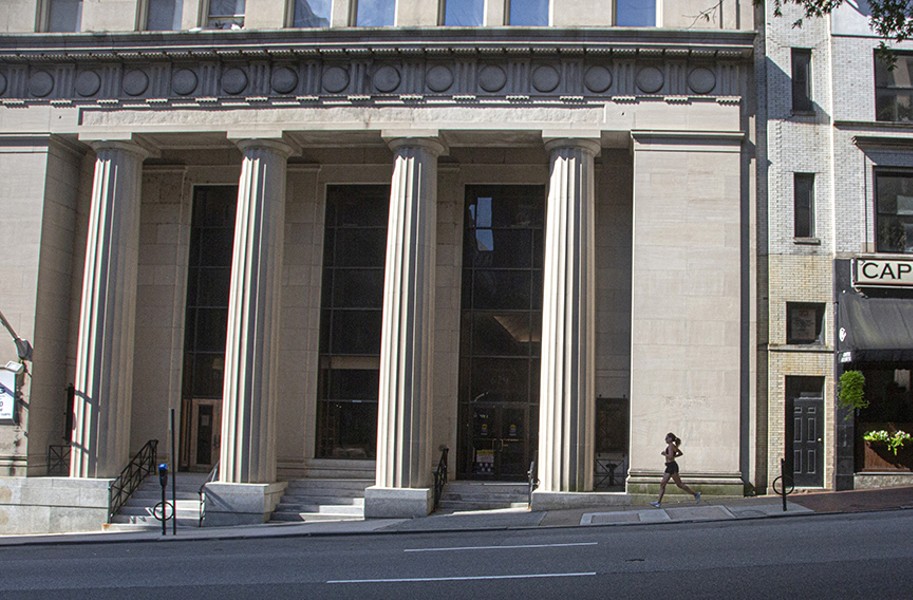 Scott Elmquist A morning jogger passes the former Virginia Department of Environmental Quality building at 629 E. Main St. The 12-story structure is being converted to 189 apartments by Douglas Development.

Last week I took a stroll through the financial district downtown with one question: When will the workforce return?

Remember downtown? It’s one of Richmond’s major economic engines. Some 77,000 folks from across the region report for work there daily. It’s where 53% of the city’s workers punch the clock. That is, before COVID-19 struck.

Would my windshield survey along the streets and sidewalk grid that defines our region’s most concentrated commercial district – between Capitol Square and the river – find that the district has regained any of its once considerable swagger?

It appears only a modest number of folks have returned work on the upper floors of the impressive office towers. But there’s plenty of construction, building renovation and movement in the works at every turn. Last week Christian & Barton, a venerable law firm, announced it was vacating the landmark Mutual Building for refurbished offices at One James Center. A few blocks to the west, Co-Star has acquired 4 acres of hillside property for a new office complex. Douglas Construction has completed the renovation of the old Stumpf Hotel at 728 E. Main into apartments.

The past six months have been bittersweet with the pandemic relegating many people with jobs downtown to their homes. While many work-from-homers are fine with padding around in slippers and avoiding commutes, some would agree that working remotely limits connectivity to business and social interaction. Gone are face-to-face encounters, gossip and eye rolling at the water cooler, and dressing for success -- if only business casual. The effective sharing of ideas with colleagues is challenging. And travel either across the hall, or to another city? Not likely to happen. 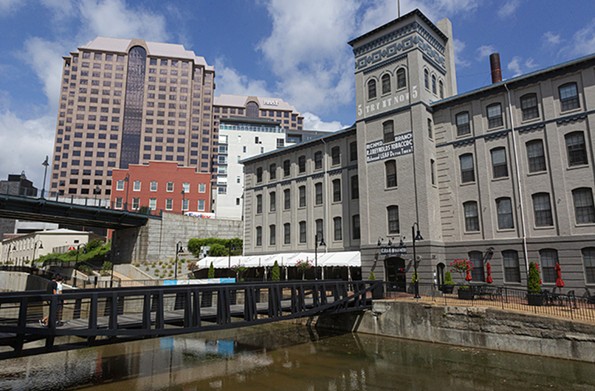 “Creativity and collaboration work better when you’re working in person,” says Lucy Meade, director of economic development and community relations at Venture Richmond. “It’s hard to mentor young people when you’re not there.”

But what happens in the fall? Will workers come back downtown? All of us are wondering, she says.

“Some companies with open office plans are rethinking those arrangements. Some employees love it, others like their own space. It’ll be interesting to watch.”

Back in January the local vibe was upbeat after a positive 2019. The Navy Hill redevelopment battle had subsided. Richmond was pulling things together through earnest attempts at balancing formerly lopsided historical narratives. Tired scripts were being discarded and replaced with more embracing narratives. Consider: The Valentine history center, in conjunction with the Storefront for Community Design and the Virginia Commonwealth University School of the Arts, completed a monthslong exhibition at year’s end, “General Demotion/General Devotion.” It re-imagined Monument Avenue in smart and often startling ways.

A year ago in March, a marker was placed in Manchester memorializing native Richmonder Dorothy Height, the godmother of the national Civil Rights Movement. In May, the American Civil War Museum opened splendid new quarters at Tredegar on the edge of the financial district at the riverfront. That June, renowned civil rights trailblazer and U.S. Rep. John Lewis graced the front terraces of the Virginia Museum of History & Culture and bestowed gravitas to the fete renaming the Boulevard for Arthur Ashe. December brought a new monument proposal, guided by Kim Gray, to honor 14 Black soldiers who earned the Medal of Honor fighting for the Union at the Battle of New Market Heights. And just before Christmas, Kehinde Wiley’s clever “Rumors of War” bronze was unveiled at the Virginia Museum of Fine Arts.

So we must be doing some things right. Surprisingly, on Jan. 12, The New York Times, with head-turning journalistic validation, proclaimed that Richmond was one of 52 Places to Go in 2020.

Of all places on the planet, Richmond was on the ultra selective list that included such storied destinations as Copenhagen, Denmark; Egypt; Lima, Peru; Leipzig, Germany; Tokyo and Mount Kenya, the second-highest peak in Africa. In case you’re wondering, it’s 17,000 feet tall.

The Times subhead read: “A once-quiet Southern city now shines as a true cultural destination.” Certainly our town was selected for its intelligent efforts at racial healing. The article cited Arthur Ashe Boulevard and the Kehinde Wiley sculpture, “which was designed to challenge the narrative of heroism in a city where Civil War monuments still loom.” For outdoor enthusiasts, the newspaper gushed “the mighty James River offers challenging Class III and IV white-water rafting, a rarity within an American city.”

As I head down North Ninth Street, with the river’s tree lines and towering Federal Reserve Bank visible in the distance, I ask myself, what would visitors find in our historic financial district today?

It’s morning rush hour but only an occasional vehicle passes. Scanning the sidewalks east and west, there isn’t a single pedestrian. If the usual workday population is staying at home, so are camera-toting visitors. Tourism is a major economic factor here. The most recent, pre-pandemic figures report 7.7 million visitors come to greater Richmond annually. They inject $2.6 billion of hotel, meals and ticket revenue into the economy. Richmond alone generates $800.2 million of that figure.

Most of downtown’s hotels have reopened -- the Omni, the Delta by Marriott, the Berkeley and the Courtyard Richmond Downtown. Up the hill and farther west, the Miller & Rhoads Hilton, the Marriott, Linden Row Inn, Quirk and the Graduate are operational. Occupancies range from 20% to a sluggish 30% tops. The vaunted Jefferson Hotel comes back to life Sept. 18.

The Ninth and Main intersection. For more than 175 years it has been the traditional heart of the financial district. Not since April 1865, the area leveled by the evacuation fire at the close of the Civil War, has the neighborhood been depopulated for so long. But the 21st century has seen growth downtown with the residential population boasting 22,646 people living in 10,212 units. These include a significant number of repurposed office buildings. Those residents must be sleeping in this morning, or hunkered down at work. 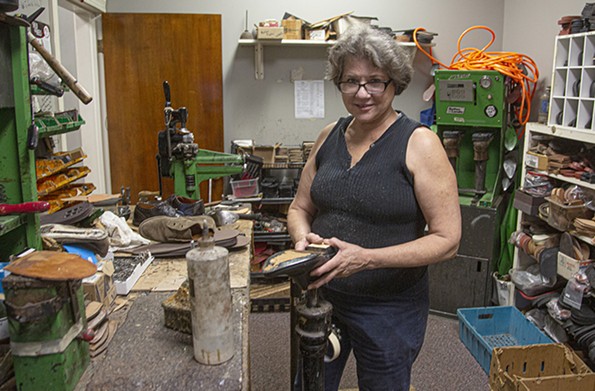 “It’s been a mixture of people working from home and those coming to the office,” says Michael Schwartz, the editor of Bizsense, who has been closely monitoring the situation throughout the pandemic. “Even the state government is allowing people to work from home until the end of the year. Some organizations are suggesting [work-from-home] could continue until spring. But it depends on the industry. Banks are working from home, but some of the law firms have been coming back, some of the older people say they need to be in the office for their sanity.”

With the classical facades of the Mutual Building and First National Bank apartments basking in splendid isolation and the morning sunlight, I hear construction buzz westward up at Sixth Street. In the 500 block of Main, some 20 workers scurry about, all wearing face masks. Concrete for the first of a five-floor apartment building, Centennial Terrace, has been poured. Elsewhere downtown, impressive building projects include the General Assembly Building, expansion of the VCU Children’s Hospital, as well as a huge outpatient building on the medical campus. A dozen housing complexes are being built in Manchester.

I cross the street and enter Gus’s Shoe Repair at 528 E. Main. Proprietor Cynthia Kalfoglou stands behind the counter, shielded by a large Plexiglas screen. After assisting a customer she says: “Sales are down 70%. We’re not getting the normal volume of ladies’ heels since women aren’t working downtown now. And there are no shoeshines anymore.” Kalfoglou says that she’s filling the sales gap by offering other services: “We’re re-heeling riding boots, there aren’t too many places that do that. And we’re replacing zippers. It’s something else that a lot of people don’t do anymore.”

Leaving the shop I pass the FastSigns at 530 E. t Main as an employee places a sidewalk sign outside the door. It promises in bold letters: “Touch-less Service.”

By 9 a.m. a few cyclists are peddling up one-way Main Street. Two other people, apparently homeless from the lumpy garbage bags they balance on their shoulders, stumble along.

An “Open” sign at Eighth and Main lures me into Elite Cleaners, a drop-off and pickup service in the Wytestone Plaza building at 801 E. Main, formerly the Ross Building. Christina Kim, who with her husband Grant operates the business, looks forlorn.

To keep busy and stay positive during the pandemic, Kim says she’s been sewing cotton masks. At first she donated them to a Presbyterian ministry. Her handiwork is displayed on a counter, a colorful and patterned display that includes polka dots and pro football logos. “If I didn’t make the masks, I’d really be depressed,” she says.

At the SunTrust plaza at 10th and Main, two construction workers wearing fluorescent yellow vests are sipping 7-Eleven Big Gulps, the same color as their work garb. They’re on break from the fast-rising General Assembly Building three blocks away.

During lunchtime I return to Main Street and find the sidewalks devoid of crowds usually flocking there in good weather. Few state employees sit on the metal benches and stone steps at the landscaped Bank of American Center. Although there’s Cafe Manna, a pleasant mom-and-pop eatery in the lobby, an outdoor lineup of food carts is a usually a popular lunchtime alternative. Christopher’s Runaway Gourmay, with its distinctive red canvas umbrellas, has recently returned to Main, reduced in number. The usual three carts, which could have 20 people standing in line at each spot before the pandemic, is now down to one cart in the financial district.

Directly across the street, on the sidewalk at the Capitol Waffle Shop at 1108 E. Main, each of the eatery’s blue and red metal seats is occupied. Apparently, comfort food was invented for times like these.

In Shockoe Slip, on the district’s eastern edge, while the flagship Tobacco Co. restaurant is shuttered, Sam Miller’s Cafe, the neighborhood’s longest-running eatery is open. At the Urban Farm House business is brisk. I rap on the door of the Fountain Bookstore, an independent bookstore closed except for pickups. An attendant shuffles through a slew of brown paper bags neatly arranged just inside the door and efficiently hands me two books I’d ordered weeks earlier.

Down the hill and across the Downtown Expressway is The Locks Tower, a new apartment building with a C&F Bank branch at 1001 E. Byrd St. No sidewalk life there or at the Riverfront Plaza or the James Center between Cary and Canal streets. Unlike East Main Street, the lower and newer developments closer to the river were built in the late 20th century following a suburban office park pattern – mostly free-standing buildings with in-building parking. Think vehicle-to-elevator-to office convenience.

At the Delta by Marriott, a 298-room hotel on Canal Street, directly across the street from the striking new Dominion Energy tower, I meet the general manager, Scott Jones. He is also currently serving as president of the Hotel Association of Richmond. He doesn’t waste words.

“The city is certainly hurting to say the least. And the downtown hotels are hurting more than the suburbs since business travel [to Richmond] has been curtailed.”

He confirms occupancy rates in downtown hover between 20 and 30%, tops. Local hotels are fighting for the leisure traveler.

“August is traditionally slow, but the scope of a number of autumn events, NASCAR, the Folk Festival and the Richmond Marathon, has been reduced this year.”

On a personal level, Jones says that reduced overnight stays means that many excellent and loyal employees, some of whom have been with various hotels here for 20 years, can’t be given adequate hours.

“It’s sad,” he says, “I’m looking forward to the day that we’re brought out of this, and we have a new normal, and can marry a safe environment with a profitable business.”