An aging music fan saves his ears and crosses off bucket lists.

Former members of the Byrds performed "Sweetheart of the Rodeo" for its 50th anniversary with Marty Stuart and the Superlatives at the Beacon Theatre in Hopewell, Va.

"Sweetheart of the Rodeo 50th Anniversary" at Beacon Theatre in Hopewell, Sept. 20

Never thought I'd get a chance to hear this historic country-rock album from 1968 performed live, but it happened, and in Hopewell of all places. Original Byrds members Roger McGuinn and Chris Hillman delivered a polished, heartfelt and memorable evening, with behind-the-music stories included but not overdone. They were more than ably backed by the sizzling Marty Stuart and his Superlatives. Hearing songs such as "I Wasn't Born to Follow" played exactly the way it sounded in "Easy Rider" nearly four decades later was crazy. The jangly guitar roots of later popular musicians such as Tom Petty, R.E.M., the Jayhawks and others can be traced back to this influential album. Definitely a feel-good tour — plus there were many well-known Virginia musicians in attendance and everybody left smiling.

Pylon Reenactment Society with Positive No at Strange Matter, June 29

One of the last really fun rock shows I would see at the venue known as Strange Matter featured a tribute group from Athens, Georgia, that delivers Pylon songs as well as humanly possible, considering it features original singer, Vanessa Briscoe Hay. And she was on fire on this night, unleashing an explosive and physical performance that recalled the early days when Pylon used to play shows with Devo, as Iggy Pop and Debbie Harry looked on in the balcony. Wonderful show all around, with Richmonder Armistead Wellford from Love Tractor joining the band onstage again.

Jonathan Richman at the Camel and the Oh Sees at Broadberry, Oct. 21

I managed to squeeze in two shows this Sunday night, starting off with a lively but somewhat short set by the legendary proto-punk troubadour Jonathan Richman and drummer Tommy Larkins at the Camel. Personal highlight: After talking earlier in the evening to Richman about a lovely new song of his, "Do No Other Thing," he closed his show with it. 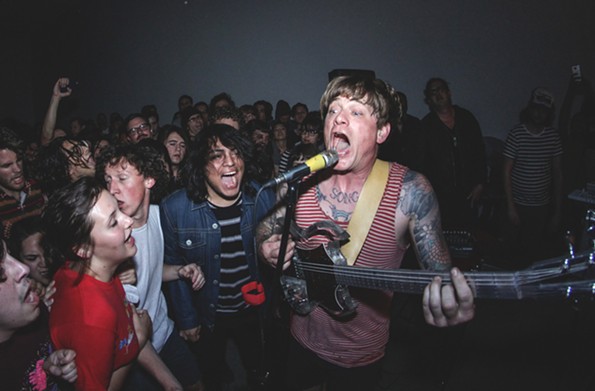 His short set gave me time to skedaddle a few blocks down and catch the last half of the Oh Sees' barnburner at the Broadberry. They're like a prog-metal version of the Monks and frontman John Dwyer is one of the more riveting lead singers and guitarists in all of rock, playing and howling like Crispin Glover possessed. Thankfully, these two venues were close together.

Side note: A few weeks later I had dinner with some friends and met the acclaimed documentary filmmaker, Sasha Waters Freyer, chairwoman of the photography and film department at Virginia Commonwealth University, and she told me she's interested in making a doc on Richman. I wished her luck considering Jonathan is known for avoiding most media. But you never know. I'd be stoked to see it happen.

Another bucket list show crossed off, because I had to see the evil Irish gremlin, as a music writer friend calls him, at least once. The show did not disappoint: Fifty years on the road and this legendary singer still has some left in the tank.

After a sadly truncated set by folk blues master Taj Mahal, Morrison was all business with a crack band that delivered a steady mix of favorites and deep cuts, from "Sweet Thing" off the masterful "Astral Weeks" to the old Them classic "Baby Please Don't Go," which definitely sent chills. A jazzy "Moondance," an appropriately haunting "St. James Infirmary" and a celebratory "Jackie Wilson Said ("I'm In Heaven When You Smile)," plus the obligatory hits "Brown-Eyed Girl" and a mostly crowd-performed "Gloria" encore followed.

The big outdoor venue was annoying though, and not just because of its name. They pack people into small rows of chairs like sardines, and the drinks are ridiculously pricey, around $23 for a double vodka tonic if memory serves.

But hey: I got to see the evil Irish gremlin blow.

This was too unique not to mention. Led by co-founder Claudio Simonetti, a new touring version of Goblin performed the witchy soundtrack for a packed screening of the 1977 supernatural thriller by Italian director Dario Argento. It's a wacked movie with horrible acting and dialogue, not very scary at all — but the colors and sets are indeed stylish. Plus I saw a young Udo Kier in there somewhere. The real draw was hearing the band set the tone with spooky atmospheric synth and driving percussion, plus the deep red Byrd felt like the perfect location for this tour (someone even played with the big chandelier colors, very noticeable in the balcony). Goblin kept the party going after the movie, performing more darkly metallic film music. Also money was raised for the Byrd Theater Foundation and Gallery5, so kudos to the organizers for trying something different.

What is it about an NRBQ show that is so life-affirming? Maybe it's watching masterful musicians, rooted in Sun Ra, Thelonious Monk and Sun Records, simply let loose and have fun. Whenever I wear my NRBQ T-shirt, old folks smile, clap their hands, or stop me on the street and tell me I'm showing my age. But I never saw them from the '60s through '90s. I just kept hearing they were a great bar band. Even with charismatic keyboardist Terry Adams as the only original member left, it was true. They had the Ale House rocking the old folks boogie, including a mesmerizing cover of the deep "Pet Sounds" track, "Here Today," that was better than when I saw Brian Wilson himself play it a few months later at the Carpenter Theatre.