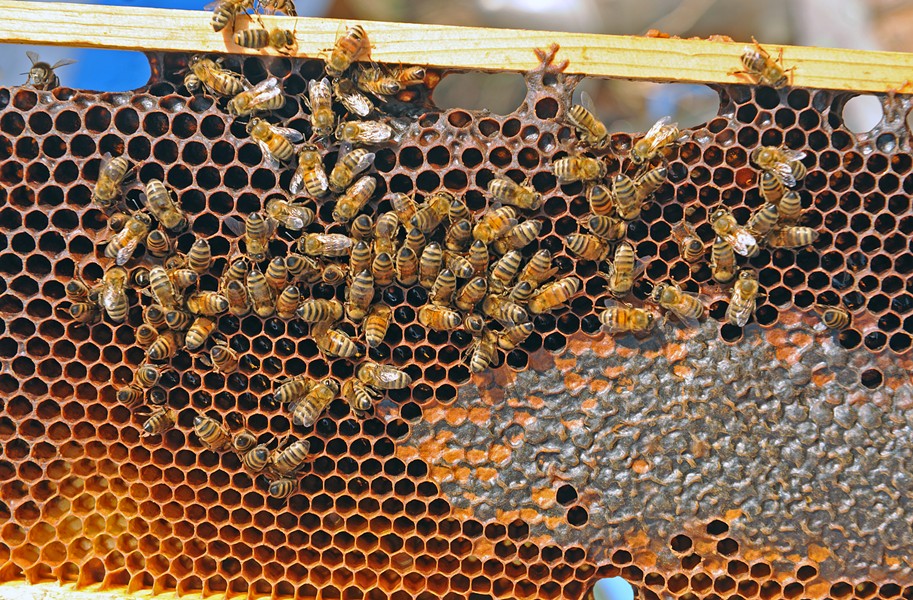 Scott Elmquist Researchers are trying to figure out why there’s a bee shortage, and plant customers are wondering how they can help. Hives like this one at Bearer Farms in Oilville contribute to the local economy.

Customers shopping for plants in Richmond might encounter some new labeling that intends to address concerns with pesticides — and whether the chemicals used are friendly to bees. But the jury’s still out on whether it makes a difference.

Several recent studies aiming to solve the mystery of large-scale honeybee death have pointed the finger at a popular class of pesticides called neonics, though not everyone is convinced that chemicals are the culprit.

Some local plant nurseries say they’re taking no chances and have banned the pesticides on their grounds.

Rash says more customers are calling with questions about whether they could be unwittingly killing off an insect that’s vital to local businesses, such as farms and breweries. Whole Foods in Short Pump had to scramble for suppliers this spring after diminished hives lead to a scarcity of local honey.

“You have to separate the science from the hype, though,” Rash says.

A fatal cocktail of stress, parasites and poor diet was originally proposed as the cause of widespread honeybee death. But in April the science journal Nature released a study that said bees can become addicted to neonics. The Environmental Protection Agency has halted the approval for new outdoor uses of neonics while awaiting further evidence.

In May, the federal Agriculture Department reported that more than 40 percent of American honeybee colonies died in the past year. But a report from the Pollinator Health Task force on May 22, mandated by President Barak Obama, gave no mention of neonics. It proposed devoting more acreage to wildflowers.

Rash says that even organic treatments for plants, such as neem oil, can lead to massive honeybee death, especially if applied during peak pollination hours. She says Australia uses neonics and has a healthy honeybee population. Europe phased out the substance but still faces the mysterious condition known as colony collapse disorder.

But a ban has put customers at ease, Rash says.

During the past General Assembly session, Sen. Creigh Deeds proposed a truth in advertising bill that would prevent nurseries from labeling plants as pollinator-friendly if treated with neonics. The bill didn’t pass.

“We’ve done this in response to media and customer attention,” Marker says. “But I have to wonder whether there’s undue focus on one particular chemical.”

Bell Nursery, which has several locations near Richmond and is a major supplier for Home Depot, tried going neonics-free for a year. But it abandoned the experiment, citing plant loss. Home Depot offered to start labeling its plants.

“In my experience, if you look at all the available data on neonics, you’ll see lots of holes,” Marker says. “For now, my advice is to find some middle ground.”