The classical world doesn't have to reach back hundreds of years to those powdered wigs anymore for inspiration. 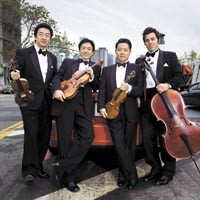 Music created within living memory has an increasingly high profile in the classical world — five of the year's 10 major Grammy Awards in the field went to recordings of works by living composers, and the other five featured pieces by composers who were alive as recently as 1950. Still, it's fairly unusual for Richmond to see two concerts by two different groups on two successive nights focusing on contemporary compositions.

The Shanghai Quartet kicks off this modern-masters minifest Feb. 22 at the University of Richmond with the U.S. premiere of the String Quartet No. 3 by Krzysztof Penderecki, the Polish composer who's evoked much of his country's recent history in music — from an “Auschwitz Oratorio” in the 1960s to a “Polish Requiem,” inspired by the anti-communist Solidarity movement, in the '80s.

The new quartet highlights a worldwide celebration of Penderecki's 75th birthday. And on Feb. 23, also at UR, pianists (and spouses) Paul Hanson and Joanne Kong join members of eighth blackbird, the university's resident new-music ensemble, in works by two composers whose 100th birthdays were marked in December: America's Elliott Carter and France's Olivier Messiaen.

Penderecki's Third Quartet, subtitled “Leaves from an Unwritten Diary,” is a nostalgic, folksy piece by a composer who once marched in the front ranks of the European avant-garde. So when the Shanghai introduced the piece alongside Penderecki's Quartet No. 2 (1968) in November in Warsaw, “it was like playing two different composers from two different centuries,” says Weigang Li, the Shanghai's first violinist. In contrast to the knotty musical language and fiendish technical difficulties of the earlier work, the new quartet is “almost completely tonal,” Li says, “very accessible, and exciting, touching and profound.”

The 17-minute, single-movement piece is rooted in a folk tune from the Hutsuls, inhabitants of the Carpathian Mountains on the Polish-Ukrainian border. Penderecki remembered his father playing the melody on his violin. “I made use of this theme, which grew in successive variations and almost took over my whole composition,” the composer said in a recent interview at Poland's Adam Mickiewicz Institute.

For the other performance, the composers showcased by Hanson, Kong and eighth blackbird are almost exact contemporaries: Carter, born Dec. 11, 1908, is alive and still at work; Messiaen, born a day earlier, died in 1992.

But more than just a day's lag in birthdays separate the two. Messiaen, who spent much of his life as a church organist, is known for music with a mystical sensibility, reflecting a “total spiritual immersion [in] human love, divine love, love of nature,” Kong says. Carter's style is more intellectual or “abstract” and challenging to the listener, Hanson says, “although in recent years his music has sounded more light-hearted, even humorous.”

The two pianists will play one of Messiaen's earliest keyboard works, “Visions de l'Amen,” which is full of “color with a bit of an edge and brightness,” Kong says. Several sections also show the composer's gift for making time seem to stand still — an extraordinary thing to do in music, which ordinarily is an art form of movement.

Hanson will play Carter's “Night Fantasies,” a large, virtuoso work from the composer's “middle” period. (“He was only 70,” the pianist notes). “His most crunchy music comes from this time,” Hanson says. “Some parts of this piece are pretty aggressive and pungent. What's most striking, though, is that nothing repeats. It's constantly, dynamically evolving, like an ongoing conversation.”

Members of eighth blackbird will play three of Carter's chamber works, and the program will feature video clips of both composers, spoken introductions to the music and a post-concert discussion with the audience. S

The Shanghai Quartet plays Penderecki's Quartet No. 3, as well as quartets by Mozart and Debussy, Feb. 22 at 7:30 p.m. at the University of Richmond's Modlin Center. Tickets are $32.

Pianists Paul Hanson and Joanne Kong and members of eighth blackbird present a free program of works by Carter and Messiaen Feb. 23 at 7:30 p.m. at the Modlin Center. Call 289-8980 or visit www.modlin.richmond.edu.