Courtesy of VMFA Two enslaved children, Andy and Willie, flank a white child, Hendra, in a detail from the work "Andy, Mary E. Hendra, and Willie" (1850), a daguerreotype from the collection of Dennis O. Williams on display at VMFA through May 8, 2023.

The great abolitionist, orator, and intellectual Frederick Douglass accomplished much in his life, including consistently championing the use of photography as a means of promoting social change for Black equality.

Considering he was the most photographed American of the 19th century -beating out Abraham Lincoln for the top spot- Douglass knew what he was talking about. In his 1861 "Lecture on Pictures," he said, “it is evident that the great cheapness and universality of pictures must exert a powerful, though silent, influence upon the ideas and sentiment of present and future generations.”

Hence the name of the new VMFA photography exhibit, “A Powerful Influence: Early Photographs of African Americans from the Collection of Dennis O. Williams” which showcases some 25 portraits of Black Americans, both free and enslaved, while demonstrating how photography revolutionized how ordinary people saw themselves and others. Photography’s ability to affirm the humanity and dignity of its Black subjects made it the ideal medium to challenge the dehumanization of enslavement and resist stereotypes.

Meanwhile, slaveholders commissioned photographs to affirm a white supremacist social order and project false narratives of “benevolent bondage,” using them as a way of supporting the institution of slavery and promoting racial segregation. Additionally, runaways could be identified using slaveholders’ photographs. 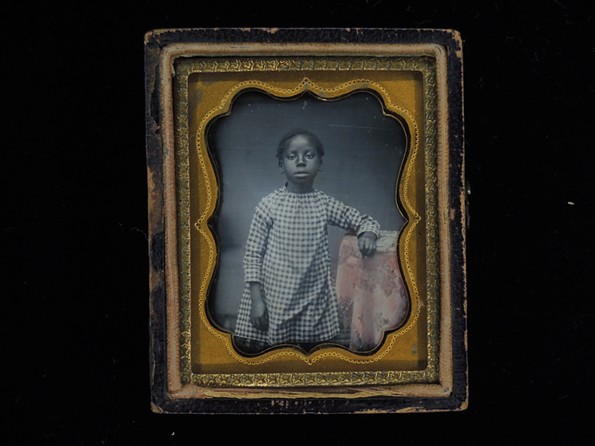 When possible, enslaved people commissioned their own photographs in order to assert their identity and sustain family bonds even when families were so often torn apart. Through photographs Black people were able to create a space where they could be free of the yoke of servitude. Even when they were coerced by slave owners into being photographed, they often engaged in acts of resistance through their posture, dress or directing their gaze away from the camera.

Such is the case with “Woman Wearing a Bonnet” from 1850. The enslaved woman pictured worked in the Rome, Ga. home of Robert Campbell Word. She wears a lace-edged bonnet and a quality, black silk dress made in a fashionable style and worn over a corset, all of which demonstrate a desire to look her best. But she refrains from looking directly at the camera, sending a likely message that she didn’t want to be photographed at all.

Even more blatant in intention is the enslaved woman in the 1850 daguerreotype “Young Siblings and Companion” by Henry Pollock. Two white children are captured with their Black nanny, the children’s gazes fixed directly at the camera. But the nanny looks away and along with her half-hearted support of the younger child in the center, she projects a steely, quiet resistance to being photographed as an intimate and willing family member.

Something else is on display in the 1850 photograph “Andy, Mary E. Hendra and Willie, Kentucky.” Two enslaved children, Andy and Willie, flank the white child Hendra, the latter staring out with an imperious gaze, dominating the image. To the 21st century viewer, her separation and domination of the brothers in the photograph comes across as a visual metaphor for the separation and division of Black families.

With the changes brought about by the Civil War, the 1870s tintype “Two Men Smoking” presents quite a different message. A Black and white man are seated side by side in a manner that suggests casual familiarity if not possible friendship. In the years following the abolition of slavery, photographs that showed Black and white subjects on the same footing helped shape new ideas around citizenship, equality, freedom, and community. Posing for a photograph had become an empowering means for Black people to counteract racial caricatures and demonstrate dignity as integral to the Black experience. 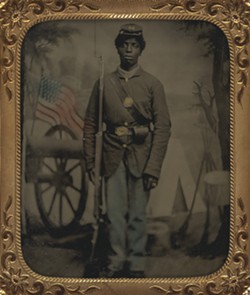 Once photography became a viable business, Black entrepreneurs began opening their own photography studios across the country. Native Virginian James Presley Ball practiced and helped shape the medium from its earliest years, and for a short time had a daguerreotype studio near the State Capital building here before moving his business to Ohio, Mississippi, Montana, and Washington. Some of his work is included in the exhibition.

“A Powerful Influence: Early Photographs of African Americans from the Collection of Dennis O. Williams” includes daguerreotypes, ambrotypes, tintypes, and early works on paper made from the 1840s through the 1880s. Many are encased in the small, ornamented frame cases made to hold the early photographs made on metal sheets polished to a mirror surface.

While the images are small, the complicated histories they portray are both powerful and poignant, offering yet another way to absorb a broader understanding of both American art and history.

“A Powerful Influence: Early Photographs of African Americans from the Collection of Dennis O. Williams” runs through May 8 at VMFA, 200 N. Arthur Ashe Boulevard., vmfa.museum