Richmond Triangle's “Bite Me!” offers vamp camp while the Firehouse's “The Widow's Blind Date” conducts a small battle of the sexes.

by Mary Burruss and David Timberline 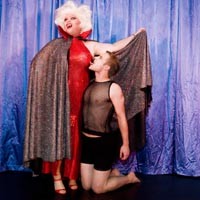 You can't throw a cross these days without hitting a vampire. Or at least that's the impression given by all the bloodsucking rampant in pop culture. Between the “Twilight” juggernaut and HBO's new hit, “True Blood,” the undead are rising, at least in visibility. Jumping on the bandwagon is the Richmond Triangle Players, which puts a campy twist on the genre with the musical, “Bite Me!”

In its quest to mine the treasure chest of vampire clichAcs for humor, “Bite Me!” follows the story of a trailer trash trio hoping to make a splash at the local auditions for an “American Idol”-like contest. Two of the girls, Summer Clearance (Margie Mills) and Charity Case (Chloe Williams), decide that killing off the competition is the best strategy. The third, Jenny (Kirk Morton), is bitten by a mysterious bat and emerges as Succula, Diva in the Dark. As she goes about ravishing audience members, her boy (Elliot Lau) does her bidding, which mostly involves wearing as little clothing as possible.

Pianist Tim Brewster and keyboardist Jeremy Hancock provide energetic accompaniment as well as occasional voices and sound effects. While the show's songs have routine melodies, they are goosed by some clever lyrics. Lau makes for spectacular eye-candy and Mills and Williams are in splendid voice, but the success of the show rides on the sequin-adorned shoulders of Morton, who is gloriously over the top. The larger-than-life wigs (designed by Junior Oxendine) add an additional layer of camp to the already extreme proceedings.

The performances provide ample distraction from the nonexistent set and the uninspired choreography by Andrew Etheredge that mainly consists of the actors walking in circles. The production struggles to overcome a community-theater feel largely because of its community-center locale. Still, for what it is, “Bite Me!” is silly good fun. -- D.T.

Need an off-Broadway theater fix but can't spring for the trip to New York anytime soon? Firehouse Theatre Project's production of Israel Horovitz's “The Widow's Blind Date” will squelch your jones. This play is as raw and powerful as Firehouse's season opener, “Eurydice,” was languid and beautiful, with equally excellent production values. The performances are good and the set design is top-notch.

Horovitz's story is a demented emotional carousel ride of manipulation, dysfunction and aggression as its three characters fight for dominance. The two men, Archie Crisp (Landon Nagal) and George Ferguson (Ford Flannagan), are working-class, mental midgets permanently lodged in their 20-years-past school glory days. The dynamics shift when former classmate Margy Burke (Jennifer Massey) shows up for a date with Archie -- and revenge.

The joy of this script is in its true-to-life jaggedness. Subjects jump in and out of conversations only to jump back in later -- old friends scrambling to recall memories. The script goes round and round with school-time stories, abuse and hair-trigger emotions as the characters scramble for power.

The show is physically, mentally and emotionally demanding of the actors. Flannagan, Nagal and Massey deftly dance through this script's minefields to a dramatic and perhaps unexpected end. They are such strong performers that you quickly overlook the obvious difference in their ages (though the characters are peers).

The set by Edwin Slipek Jr. (a Style Weekly senior contributing editor) is a brilliant example of spatial use. It convincingly depicts the industrial setting of a paper-bailing factory while providing the space and dimensions for movement and meaningful blocking. The set is so well-executed that I had to make a closer inspection of the paper-bailing machine to be sure it was fabricated. -- M.B.