Catching up with former residents of Camp Cathy and the mother figure still helping them survive. 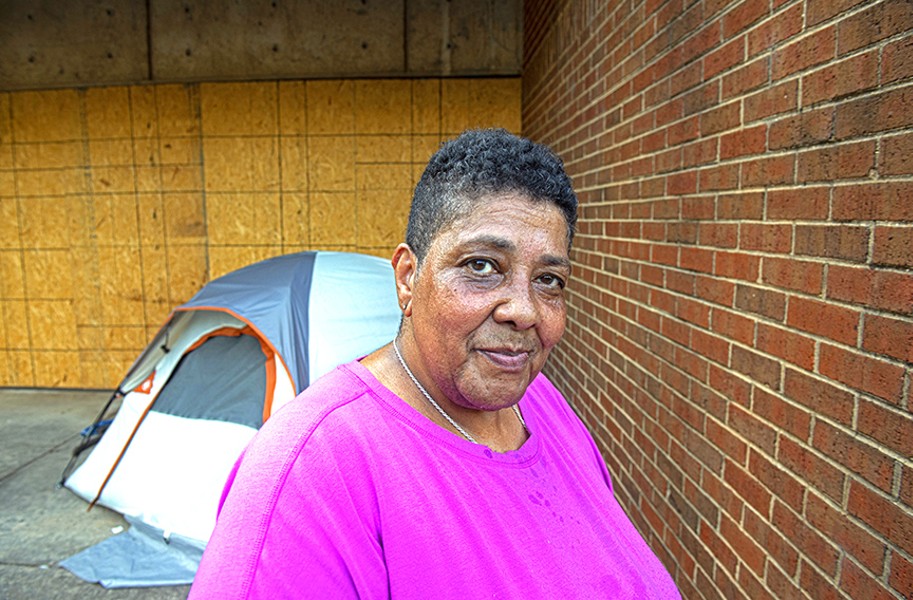 Scott Elmquist Rhonda Sneed, co-founder of Camp Cathy, a former tent city for the homeless on Oliver Hill Way that was dismantled in March 2020.

Sam Mosley was released from a weeklong psychiatric hold on a frigid November day in 2019. He was losing his battle against heroin addiction.

Without a home to return to, he feared the night ahead when temperatures were predicted to drop to just over 42 degrees. But despite weather cold enough to be a health hazard, the temperature wasn’t low enough to meet the guidelines for the city to open its cold weather shelter at the Annie Giles center in Shockoe Valley, which was shuttered last year.

His salvation that night came from rows of tents set up outside of the center – the transient dwellings of other homeless people. He found welcome from Rhonda Snead, head of Blessing Warriors RVA Inc., affectionately called Momma Rhonda by many in the homeless encampment.

“I seen Rhonda out there and told her I had nowhere to go, and she said she didn’t have a tent for me that night but she said tomorrow, she would try to get me a tent,” Mosley says. “She got me a bunch of blankets, but I was warm, slept out on the street that night.”

The tent city, endearingly called Camp Cathy, was a haven for Mosley and other residents served by Blessing Warriors and a network of volunteers and churches. They were given boots and socks to protect from foot rot, winter coats, sleeping bags and tents. It was critical support that stabilized camp residents and kept them in one place long enough for them to get additional help, Mosley says.

“Before Camp Cathy, some of the case workers couldn’t find the people because they would be out in the street,” Mosley says. “Some of them, before COVID hit, got them a place to stay. … We ate a lot and gained a lot of weight at that place.”

In March 2020, Camp Cathy was removed by the city, which cited public safety concerns early in the pandemic. Some Richmond residents took to social media to say the move was pre-planned by the city to clear the camp from a Virginia Commonwealth University-owned parcel, regardless of any dangers posed by the virus. 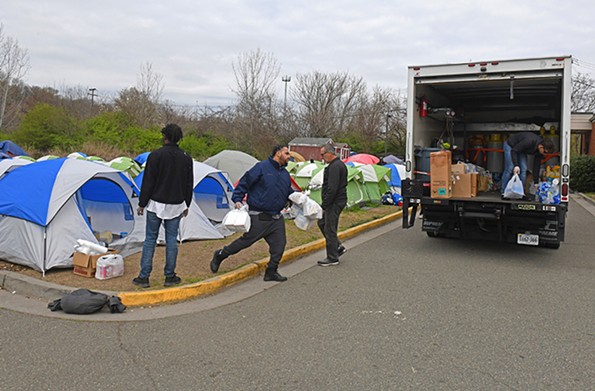 “I just sat there and watched them pick up our homes and dump them in the truck like it was nothing,” Mosley says.

Since then, several area hotels have been used to provide temporary shelter to more than 1,700 of the Richmond region’s homeless during the pandemic – the largest sheltering effort the city has seen in recent history, says Kelly King Horne, executive director of Homeward, a marked increase from 330 people served by Richmond area shelters at the beginning of March 2020. She adds that over 600 families have been connected to permanent housing since. 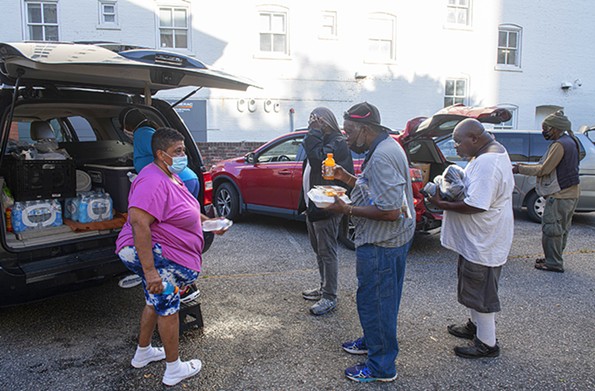 But none of this is enough because the length of shelter stays is longer than in previous years, King Horne says, and eviction moratoriums that saved many from homelessness are constraining the availability of affordable units and driving up costs.

Providers are facing the region’s largest single-year increase in homelessness, up from 549 to 838 this year, based on a single-day count in January. And as Homeward looks toward ending temporary hotel housing by the end of the summer, time is against the nearly 400 sheltered temporarily as of mid June.

Before the pandemic, Camp Cathy was a tangible symbol of Richmond’s homelessness epidemic. Standing outside of the cold weather shelter, the encampment fired up advocates who questioned the city’s policy of waiting until temperatures dropped to what many consider severe levels before opening the building.

Disbanding the camp was a large-scale example of the city’s practice of banning the homeless from congregating in outdoor spaces such as Monroe Park and the Coliseum, advocates added. Ending Camp Cathy represented a loss of community for people who often don’t trust social systems enough to stay in a shelter, Sneed points out. “They ran their own camp,” she says. “It was their place. They learned to become a community.”

Now almost daily, Sneed loads her SUV with more than 500 bottles of water and Gatorade, treasured commodities in the summer heat. On errands to meet the homeless where they are, Sneed sees familiar faces from the camp on the streets. Others live in shelters or hotels. Some, like Mosley, have secured rooms or apartments.

“Of course, you come across a lot of people you think are intoxicated, but they are dehydrated,” Sneed says. “I make them drink the Gatorade, but they think: ‘This is gold to me, so I’ll save it.’” 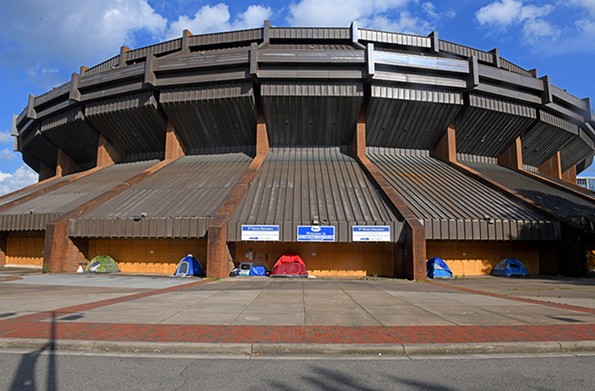 On a recent humid Monday in June, Sneed and another volunteer delivered meals to people living in a ring of tents surrounding the Coliseum, then moved to the parking lot of St. Peter Catholic Church on E. Grace St. Blessing Warriors funds hotel stays, covers prescription refills and gives hospital transports. And it is a lifeline to practical supplies: tarps, tents, clothes and work boots for people who have found jobs.

Sneed is already securing supplies for the winter and will often leave her own home at all hours of the day to meet the needs of the homeless. “They know my truck. At 3 a.m. in the morning, they know that’s just Ms. Rhonda checking on them,” she says.

Many people are looking for answers they aren’t getting from the city, Sneed says. Outside of the Coliseum, city officials have posted notices that say camping on public property and benches is illegal. At the bottom is the homeless crisis hotline, which more often than not simply reminds the people who have phones that there is no available shelter. This was the case when Style Weekly called that afternoon.

As Mayor Levar Stoney’s administration looks again toward revitalizing Navy Hill, the future of the Coliseum and the small encampment shaded by it is uncertain. The number of people who are homeless is expected to grow, which has led the city to consider the purchase of a hotel to serve as a year-round inclement weather shelter by this fall.

While the pandemic has applied new pressures to most families and individuals, the homeless population has been disproportionately impacted by increased rates of mental illness and drug use, Sneed and service providers say.

“A lot of people just gave up,” she adds.

Here are a few of their stories, which they graciously shared with Style Weekly. 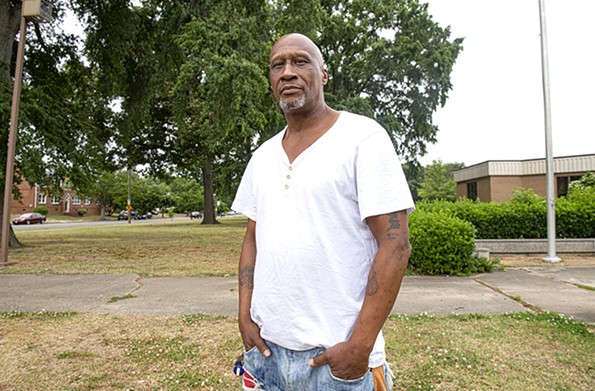 Sam Mosley fought to quit heroin, maintain a job and find a stable home in the months after Camp Cathy was torn down.

“I still had my slips in between. I had my bouts,” he says. “But I didn’t tip over and go all the way back.”

But change came after another fall. As the city prepared to remove Camp Cathy, Mosley says he suffered another mental health crisis and returned to temporary in-patient psychiatric care. Observing other camp residents find their way off the street had inspired the 50-year-old to take the first steps toward sobriety.

“People [were] going in [to Camp Cathy] and actually achieving their goals of getting placement and moving on,” Mosley explains. “I got tired of my situation and when I decided I wanted to stop, the city decided it didn’t want us there anymore. … They started putting up fences and I had went back to the psych ward because I felt like I was really going to hurt myself this time.”

Still in active addiction, he slept on the street, in the homes of friends in public housing and sometimes in their hallways. On an early July afternoon, Mosley went to a local soup kitchen for sleep and lunch and met a counselor who found him placement in the temporary hotel housing program run by Homeward. During a three-month hotel stay, it was harder to obtain heroin, which motivated Mosley. After an overdose, he reached out to a service provider with the city, who connected him to a methadone program.

“Once I got into the [hotel], I had to go out every day to scramble and hustle and get this drug and I was just tired,” he says. “I went ahead and got into the methadone program and within the first month, I started working and haven’t looked back.”

He moved into a room at the Richmond Urban Ministry Institute shelter on Chamberlayne Avenue, where he saved enough money to purchase a moped to get to work and to rehab appointments. Now Mosley rents a room from a friend and is searching for an apartment, but his savings are limited by $100 in weekly garnishments from his check for legal penalties. But Mosley is driven by his desire to stop making toxic decisions and living on the street.

“I don’t want to be on Fourth and Broad Street in front of that church waiting for food. … I have a job, a place to stay and I can feed myself,” he says. “So if I choose to go out here and do drugs and lose my job, that’s my damn fault because I was given what I need to stand up.” 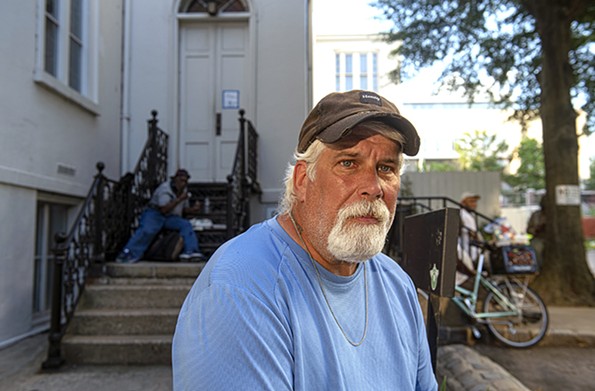 When 52-year-old Mike Call was in a car accident that broke both of his legs in multiple places and put him in a wheelchair, he was homeless yet another time. With a tinge of dark humor he says, “Yeah, it should’ve killed me. Sometimes I wish it had.”

Call was dropped off at Camp Cathy in his wheelchair by his father, but has since recovered enough to use a walker.

Blessing Warriors gave him two tents: one for his belongings and another for his wheelchair. When Call was homeless several years ago, Sneed found him a job working for a contractor and he was able to support himself for nearly three years before the accident. Distrustful of the city, Call didn’t want to take a hotel placement after Camp Cathy was removed. That is, until he was encouraged by Rhonda.

“She brought me food and she brought me clothes, blankets and wash towels to the hotel,” he says. “You name it, I had it. I trust her with my life, plain and simple. When she tells you she’s going to do something, she does it.”

In June, he was living in a downtown shelter and left to assist his family following a death. But with no bed space across the city, Call didn’t know if he would be able to return. 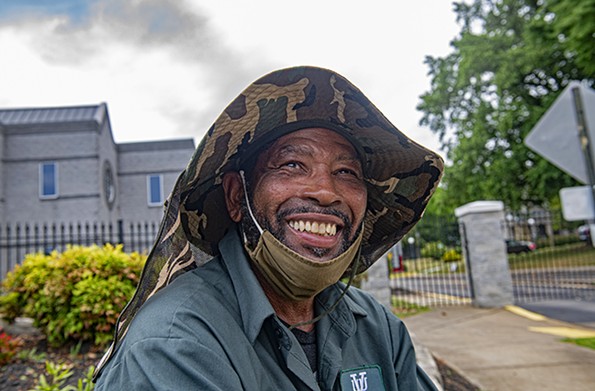 By chance, Sherwood Jasper was given a space in a halfway home, after a visit from staffers of the Ms. Community Clovia radio show on Kiss 99.3-105.7 brought more attention to the camp.

Before that, he pieced together a living working odd landscaping jobs while living in Camp Cathy.

“[There’s] help out here, you just got to want it and you just have to go get it,” he says.

Jasper now has stable employment as a landscaper for Virginia Union University, a job he was connected to by Blessing Warriors. It’s allowed the 56-year-old to catch up on overdue child-support payments.

“I always did something for my kids, but it was under the table,” he says. “They didn’t know. I always wanted to take care of my kids. I just started to get behind. … I don’t have to worry about that again.”

Jasper, who helped maintain order in the camp, says he found the security he needed in Camp Cathy. Sneed was organized and kept a numbered list of all tents in the camp and residents pitched in to keep trash from piling up.

“I miss Camp Cathy, but I grew up. I couldn’t stay there,” Jasper says. “[But] there was a lot of love. God had his hands in that place.”