COMMENTARY: Where Do the Lost Things Go?

How to move the not unimportant statues that have passed their expiration date. 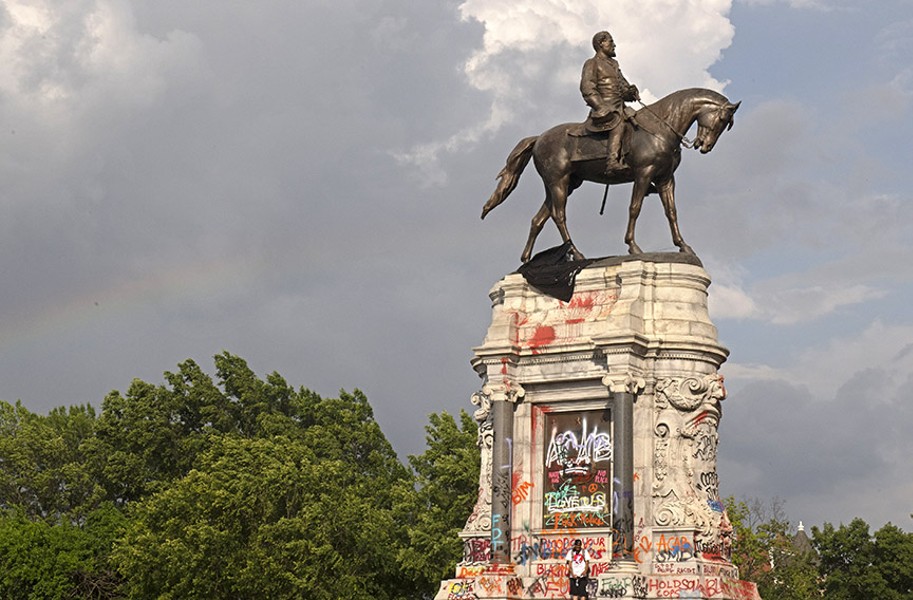 Scott Elmquist The Robert E. Lee statue on Monument Avenue (designed in 1890 by Parisian artist Antonin Mercie) as it appeared earlier this month.

A perennial argument for retaining Richmond’s historically fraught monuments has been that they are essential to tourism, an economic driver here. Some ask how could a town that has long prided itself as the City of Monuments possibly function without a string of Confederate statues along Monument Avenue?

Such a thought is unimaginable to some, while many others find it long overdue and healthy, pointing to a more inclusive future built on less controversial attractions. The latter stance is true of demonstrators who have demanded the removal of politically incorrect pieces of heavy metal, or devised immediate exit strategies themselves, as with statues of Christopher Columbus and Confederates Williams C. Wickham and Jefferson Davis.

In coming to grips with now empty public spaces long associated with such lightning rods as Columbus and Davis, important questions for our community’s stewards of history should focus on what happens when the winds of daily politics and passions subside? First, where will these debunked sculptures be housed until they can be cleaned (or not), conserved and reinstalled securely for future examination and study? While some people hope they never see the light of day, I suspect that once the considerable dust of the spring of 2020 has settled, they will find an afterlife. The century-old sculptures will no longer proclaim the Lost Cause but serve as passive and invaluable artifacts from painful chapters in our community’s history.

While there are logical places for these metal pariahs to be resettled, a vexing question is whether or not local institutions have the will and vision to take them on. There was a resounding silence for the almost two years that have elapsed since a municipal advisory panel suggested that the relatively modest-sized Davis image be removed and contextual enhancements be made to the other pieces on Monument Avenue. On July 1, the law changes allowing localities to decide their fate – not a moment too soon.

The Valentine, a center long-dedicated to Richmond history, would be a logical space for Davis since the studio of its sculptor, Edward Valentine, is a major installation on the institution’s tightly configured Court End campus.

In contrast, the grounds of The Virginia Museum of History & Culture and the American Civil War Museum, both private institutions, are large enough to serve as repositories for the equestrian Thomas “Stonewall” Jackson and J.E.B. Stuart sculptures. They would require enclosed facilities, for a variety of reasons. The Civil War museum, however, has already begged off citing lack of funds and space. And the argument could be made that interpreting the post-Civil War era is not its institutional mission. The Virginia Museum of History & Culture, however, already possesses one of the most famous Lost Cause artworks, “The Four Seasons of the Confederacy,” paintings made in the same time and spirit of the Monument Avenue statues. The museum, which recently signaled that it might accession fragments of a GRTC bus destroyed by protesters, has been quiet on the fate of the historic statues.

As for the J.E.B. Stuart monument at Monument and Lombardy: In light of the positive reception given the Kehinde Wiley sculpture, “Rumors of War” at the Virginia Museum of Fine Arts, would this contemporary work lose any of its highly charged power if its aesthetic inspiration/counterpart were far removed? It’s a question worth asking when deciding Stuart’s fate.

The Lee statue, complete with pedestal, might find refuge at Stratford, a not-for-profit museum complex on the Northern Neck in Westmoreland County. This was the Confederate general’s ancestral home and birthplace. Richmond, however, the former capital of the Confederacy, would lose an important artifact.

Leaving empty pedestals, while making a bold statement that their occupants have fallen from grace, is ultimately unsatisfactory. Recently, I visited the German city of Weimar and came upon an empty pedestal in the center of a prominent town square. While I was curious, I didn’t inquire as to the identity of the missing figure. With Germany’s often checkered history, I could only imagine.

In Rome there are a number of colossal columns, 60 to 100 feet tall, that once supported statues of ancient rulers. With the rise of Christianity and the Vatican, these pagan rulers were replaced by holy figures. St. Paul, for instance, now lords over the neighborhood from the perch that Marcus Aurelius once occupied.

Another option might be for the statues and their bases to be moved to a neutral, privately owned site off the beaten path.

A number of years ago in Budapest, Hungary, I came upon an intriguing solution to resettling banished monuments. As I wandered through the stately city with its crisscrossing and majestic boulevards, there were numerous empty traffic circles or plazas with paved areas that had obviously once held sculptures. When I inquired as to where the figures had been taken, a few locals explained they were in Memento Park. Few knew its whereabouts.

Eventually, an elderly woman explained that a train and two buses would take me to an open field some 12 miles beyond the city. Here, private investors had moved 42 mostly huge – no, make that overwhelming – statues to leaders of Hungary’s Communist era, which lasted from 1949 to 1989. Upon arriving, the only other folks my brother and I found were a hunched woman selling Soviet era souvenirs and an attractive young family from California. It was an otherwise dispiriting and forlorn place. 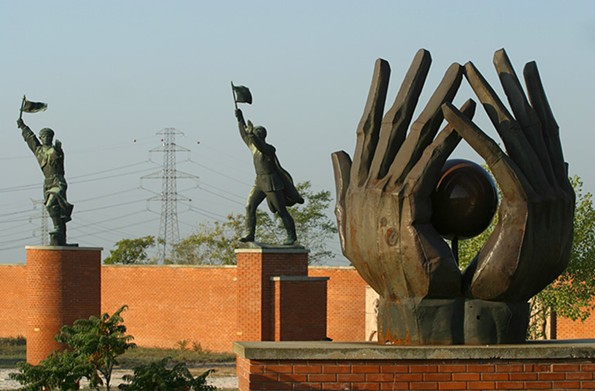 But Budapest’s Memento Park sparked a question: Are 50 acres available along U.S. Route 360 in Amelia County?

Edwin Slipek, Style Weekly’s senior contributing editor and architecture critic, is an adjunct instructor in the School of the Arts at Virginia Commonwealth University.